Just me, or did yesterday's confirmation by the Māori Party that it will not endorse Helen Clark in her bid to be the next UN Secretary general flick some kind of switch? The not-unexpected announcement provoked a furious political response and some citizens were needlessly rude to Māori Party co-leader Marama Fox when she restated the party position on Twitter.

Social media abuse also flowed the other way, towards liberals who debated the stance ("shut the fuck up" was one of the less useful contributions). Others were moved to state their own misgivings about the Clark candidacy. After the whole thing had drifted on for months as a matter of vague patriotic duty, we seemed to finally be saying what we really thought. It seems worth considering in more than 140 characters.

I don't debate the Māori Party's right to withold its endorsement of Clark and I think the response to its decision has been excessive. The decision is not "treachery" or anything like it. I realise these things will be perceived differently in te ao Māori and I can't presume to to tell anyone what to think about that. And I have a high degree of respect for both Marama Fox and Te Ururoa Flavell. I met Marama not long after she was elected and was hugely impressed by her.

But I do firmly believe that if you're going to expand the argument to the Secretary General candidates' "skills" or "knowledge" in the interests of indigenous peoples – as both party co-leaders have done – there is probably no stronger candidate than Clark. In part, that's simply a reflection of her role as head of the United Nations Development Programme, but it's true nonetheless.

But it's not that straighforward. In its troubled last term, Clark's government was one of only four (along with Canada, Australia and the US) that declined to sign the UN Declaration of the Rights of Indigenous Peoples. Its ostensible reason for doing so – that the declaration was in conflict with New Zealand law and practice and the Treaty of Waitangi in particular – was not actually invalid.

But it could and should have done what National did three years later and reserved exceptions on that basis. It would not have won a Parliamentary vote to do so in 2007 – but it didn't need to. The declaration isn't a treaty or a convention and it requires no ratification. As a statement from John Key noted no fewer than four times when Pita Sharples eventually went to New York to affirm it in 2010, his goverment was accepting the declaration as an "aspirational" document.

New Zealand's relationship with the UN Special Rapporteur on Human Rights was already uncomfortable in 2007, given that office's strong criticism of the way property rights were appropriated in Labour's Foreshore and Seabed Act 2004. (It's worth noting that this was before National's 180-degree shift on the same issue: then-Māori Affairs spokesman Gerry Brownlee urged Clark's goverment to "show this report the respect it deserves by throwing it straight into the dustbin".) This article for the New Zealand Yearbook of International law by Fleur Adcock (not the poet) offers an interesting perspective on what actually did and didn't change when the  Act was replaced. But Key's government was able to find a political way forward, Clark's wasn't. She has to wear that.

And yet, as administrator of UNDP, she signed and helped direct the creation of this handbook for the implentation of the UN Declaration of the Rights of Indigenous Peoples. Since taking up the role in 2009, she has consistently kept the interests of indigenous people in the conversation. Earlier this year she noted in a formal statement that:

At the global level, UNDP engaged last year with the Special Rapporteur on the Rights of Indigenous Peoples throughout the process of consultation and drafting of the UN System Wide Action Plan (SWAP) for the implementation of the UN Declaration of the Rights of Indigenous Peoples. The SWAP will bring more coherence to UN interventions in support of indigenous peoples’ rights.

It's wordy and procedural but it does mean something. That same might be said of the big policy achievement of her UNDP tenure, the Sustainable Development Goals. Earlier this year, I was fortunate enough to attend the United Nations General Assembly Special Session on the world drug problem. I was struck by the way the SDGs – which essentially define and test the reasons we make policies – provided almost the only overarching philosophical rigour at that big and sometimes bizarre meeting.

UNDP's submissions in advance of UNGASS were high-quality and influential and I spoke to a number of NGO representatives who were very excited by the prospect of her winning the post of UN Secretary general. I interacted with several UNDP people and that also reinforced the impression that this was a UN agency that was running well.

It's also a UN agency that Clark reformed, slashing management roles in a way that was virtually unprecedented. It cost her politically, but brought the agency within its means. Her style in doing so may also have been, as Colum Lynch's Foreign Policy article argued, vindictive and possibly driven by her ambition for the top UN job. But if Clark, as she has repeatedly indicated, sees herself as willing and able to carry out reform of the United Nations and make it "fit for purpose", there can be little doubt she has the ability.

There are other reasons to favour a Clark candidacy: it's long past time for a woman Secretary General, and it would be nice (and good for New Zealand) to have a New Zealander in the role. But I think more important are the specific reason of her engagement with indigenous peoples' interests over the past seven years and the general reason of her willingness and ability to reform the United Nations from the top.

So, I'm not telling anyone to get over anything and I think the Māori Party should be allowed to take its own position without its leaders being abused on social media or anywhere else. But I do think Helen Clark has a strong case to be the next United Nations Secretary General.

Anyway, there's one thing we can all get together and laugh about. And that is what happened with the Guardian column by Carl Ungerer, the former advisor to the unloved aspirant to the SG role, Kevin Rudd. In criticsing the Australian government's decision not to back Rudd, Ungerer wrote this:

Presumably the Turnbull government will now vote for Helen Clark from New Zealand.

But Clark is unacceptable in Washington, and is not well respected among the UN establishment. For Washington, she will always be the anti-nuclear campaigner that forced the split among the “Five Eyes” intelligence community.

Some Twitter friends drew my attention to the column, suggesting that this didn't seem right. It wasn't, of course: it was hilariously wrong. And then, overnight, Ungerer doubled down: 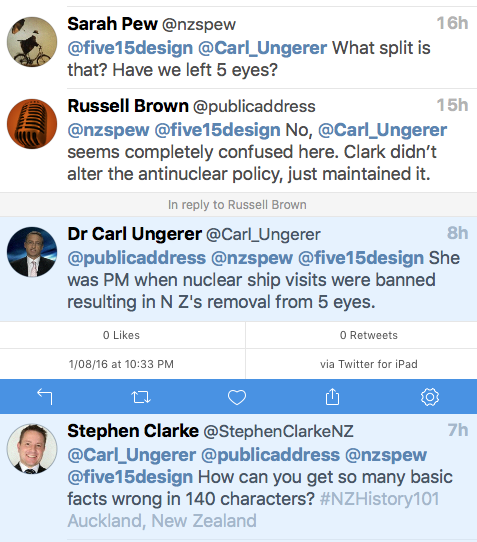