I was never any good at woodwork. At school, for me, it fell into the same category as playing the recorder: not only something I could not do well, but which actually caused me some grief in the attempt. Assumptions about gender being what they are, home economics was not on offer to me and it wasn't until years later that impending fatherhood led me to the discovery that I could actually cook.

But still, I'm a dude. I  like tools and gadgets. And in place of a shedful of saws and screwdrivers I may or may not use, I have ... cookware.

When I was Australia earlier this year, wandering through a big mall in Newcastle, I chanced upon a branch of Myer, the department store. Five minutes later, I was calling home.

"There's so much cookware!" I yelped into the phone. "And it's so cheap!"

And truly, there was Scanpan upon Circulon, balanced on one display table after another. Bearing in mind budget and luggage limits, I managed to leave with just one thing: a small Le Creuset baking dish.

I'm not always this good. Earlier this year, I rode over to La Cigale market in Parnell one Saturday and discovered that Southern Hospitality, the professional kit supplier, was having a "garage sale" out the front of its premises. Market-goers swarmed over the tables.

And no wonder. Stuff was really cheap. I picked things up and put them down, trying to gauge not only what made sense to buy, but what might actually fit in my single pannier bag. A really decent bread knife for $20, a small stainless steel saute pan for $10, a couple of knick-knacks ...

But no, that wasn't enough. When I got home, I thought, man, there were a couple of things there ... most especially, those extra-big stainless steel stockpots. Thirty-five bucks! It would just be rude to leave a bargain like that on the table. I could go back with the car ...

"Don't buy a stockpot," said Fiona as I went out the door. "We don't have anywhere to put it."

"But it would be great for, um, parties," I insisted.

"Please don't buy a stockpot," she repeated as I went out the door.

You may have guessed, reader, that I bought the stockpot. Although my strategy of cleverly stowing it in the cupboard until it didn't matter any more was good for only about 10 minutes. She was pretty good about it, really.

And I haven't yet had cause to use the stockpot, but good kit is good kit, right? And I'm pretty attached to particular items. For years, my main squeeze was a big, heavy cast-iron pan I bought at a second-hand shop in Nelson. It was unbreakable.

That gave way eventually to my Circulon chef's pan, which I picked up for cheap years ago when Farmer's was selling out of the line. 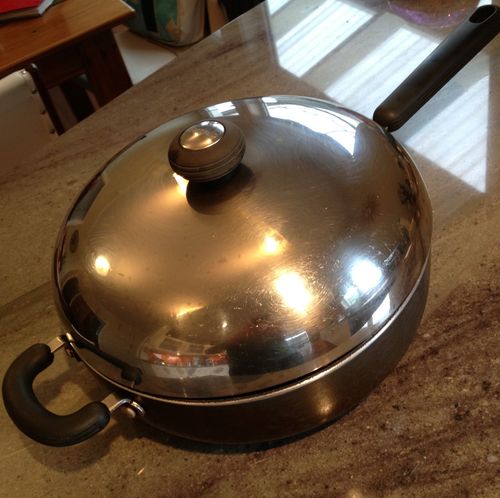 That's old Circulon, not that softer stuff you see sponsoring Masterchef these days. It's been an absolute champ, that pan. I've used it literally thousands of times, for everthing from pasta sauce to deep-frying, and although the surface is starting show some wear, I've not seen anything I'd regard as a worthy replacement.

Then there's my only Le Creuset pan, this sweet little sauce pot I found in an op-shop. It must have had a long life before I got it, but its inner enamel surface looks to have years in it yet. 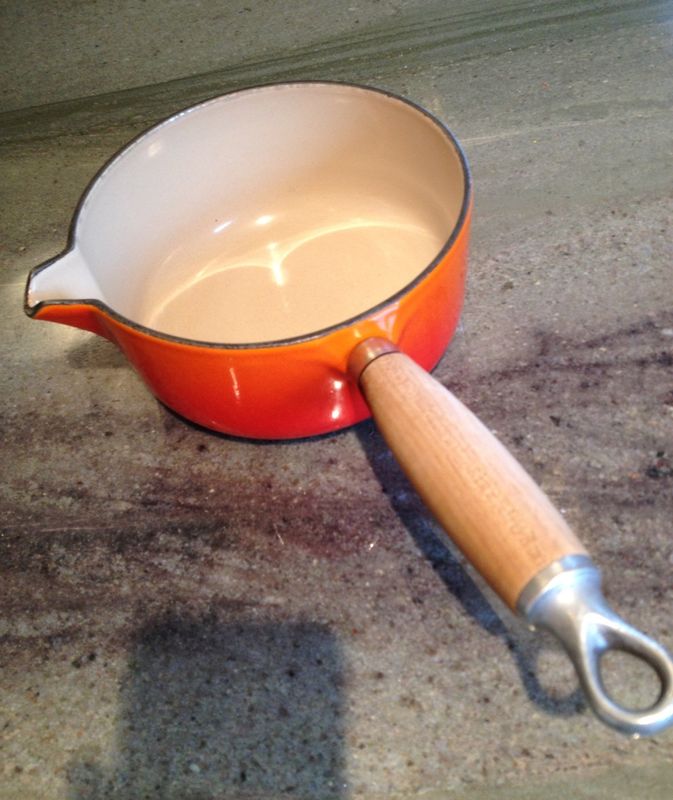 The only cast-iron pan I use regularly, for roasting spices and pine nuts. It's perfect. Can't recall where exeactly it came from, but it was also pre-loved. 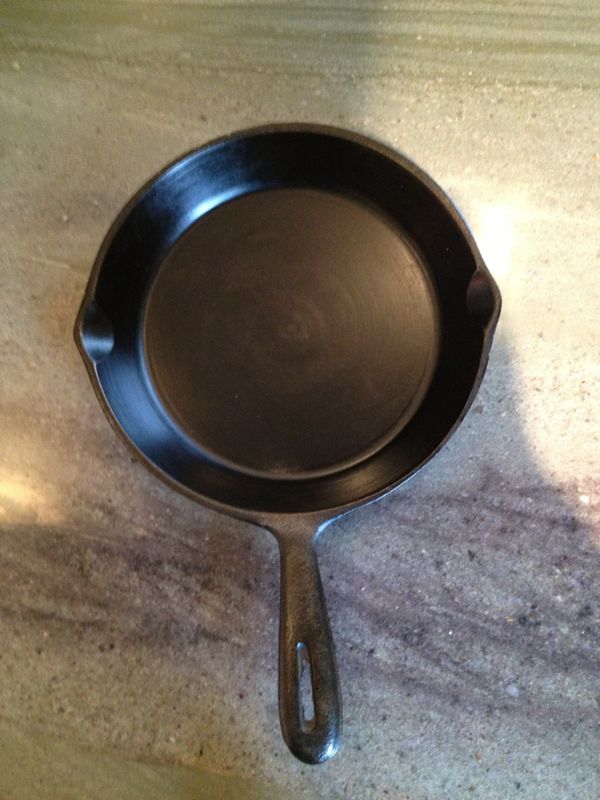 Then there are the Global knives, originally as a set that we impulse-purchased one day then had on layby for nearly a year. Wonderful Japanese knives, each a single piece of soft-steel, but I'm wondering if they're due for a professional sharpening, because the water-wheel sharpener just isn't doing it any more. 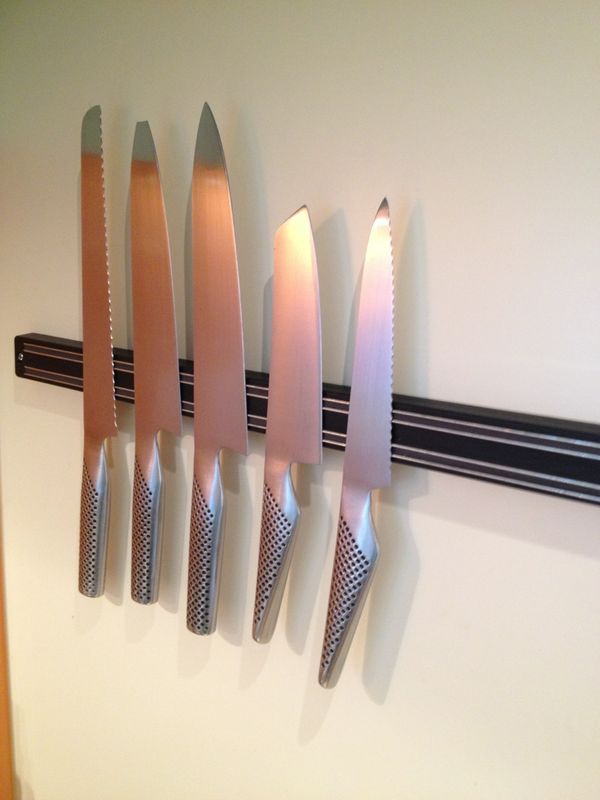 My two 1970s Temuka oven-to-table dishes, both, I think, from Avondale Markets. I don't use them all that often, but they are very nice just to have. 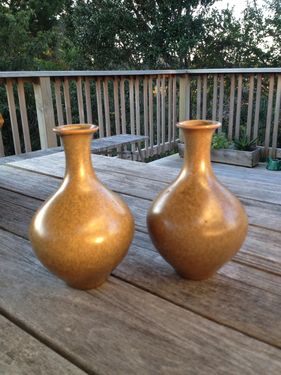 And, finally, the Tramontina, made in Brazil and purchased at half price (which was still more than I'd ever paid for a pan) at Stevens. This thing is incredible: a shallow cast-iron braiser with a slick cooking surface that just rinses off, no matter what you've been doing with it, and heats with almost supernatural evenness. This thing might actually outlast me. And it is so pretty. 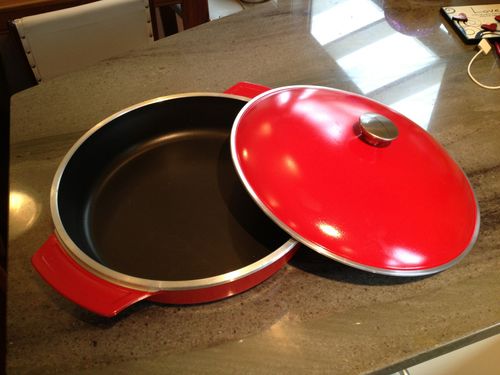 I have two double passes for next week's Auckland Food Show to give away for the best comments. If you aren't in Auckland you can pass them on to a friend who is. And yes, I can make those Preview Day tickets if you can attend that day (which I'd recommend).

PS: Photographs are most welcome. To add a pic to your comment, click the "Choose file" button and browse your computer for the file. Pics of around 1MB are okay. I find that Exporting from iPhoto as "Large" and "High quality" is about right.