The now-or-never argument - that we must change the flag now, or be stuck with it for the rest of our lives - is plainly wrong.

We will have to change the flag if we become a republic; and we will have a real republic debate when we have an unpopular monarch ("King Charles of New Zealand"?), another popular leader looking for a legacy project, or (let's face it) when Australia does it.

If you've got twenty years left in you, I reckon your odds of seeing a flag change are pretty good.

But the part I found most thought-provoking was the comparison with South Africa - that their "temporary" flag, thrown together in a hurry, has grown to be a real and enduring symbol:

People learn to love their emblems.

Presumably, they didn't learn to love that flag because of its crisp, modern design and excellent identifiablity at a distance; they loved because it meant something to them - the end of Apartheid. And it didn't represent the end of Apartheid because the designers were super clever and *designed* that meaning onto the flag. That meaning got put there by history: 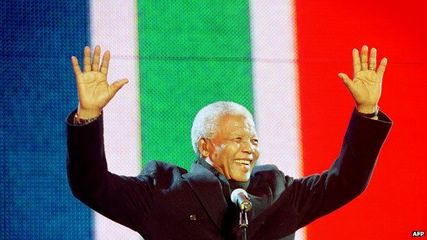 It's unlikely that we'll ever have a national myth as dramatic as South Africa's, or France's:

...and that's great in terms of not-dying, but it means we have to imbue our flag with meaning in some other way. But what meaning do we even want to imbue it with? This? 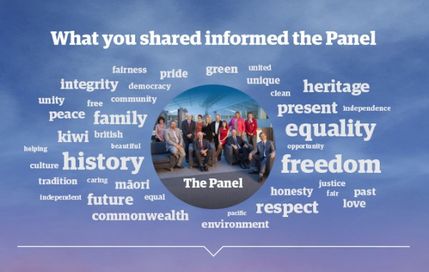 To state the obvious: I don't think you can describe a nation's soul with a word cloud. A word cloud that doesn't even include "pies".

But seriously. Who are we as a nation? What's our story? We grasp at "defining moments" in our history, but they never seem to define anything.

For example, what does Gallipoli say about us? That we're a nation of brave red-blooded men who are willing to lay down our lives for God, king and country? Or that after being sent into a senseless meat-grinder by our imperial overlords, we said "never again!" and were henceforth masters of our own destiny? And what *do* we celebrate about Waitangi Day? Is it the foundation of lasting, equitable partnership? A lie which gives legitimacy to an occupation by force?

Of course history isn't so black and white. But we seem to be stuck at: "so that happened, it's very important... so you should interpret it for yourself kthxbye".

Once upon a time, things *were* much more black and white and we had a national myth, a sense of who New Zealand was as a nation.

Those views - and that myth - are now politically incorrect, but the alternatives views are still too confrontational, too disrespectful, too why-do-you-have-to-bring-it-up-today-it's-a-holiday-FFS.

Our national identity is in transition. Not just in terms of demographics, but in terms of values and our sense of nationhood.

I wasn't conscious of it at the time, but I think red peak felt like nationhood because it felt like a *new* nationhood. Understanding that also made it clear why some people craved the continuity. They didn't like the Union Jack, and they didn't want to be mistaken for Australia, but apart from that, they wanted the flag to stay the same because they wanted it to represent the same nationhood it's always represented.

Their sense of nationhood is old, but real and legitimate. You can't demand they change what they believe New Zealand ought to be. But by the same token, you can't demand that red peakers *want* continuity with the old flag (or that monarchists want to drop union flag), either.

To say that left-wingers are hating on the Lockwood flag out of spite for Key assumes that removing the Union Jack is fundamentally progressive.

But it's not. It's about tweaking the symbol of the status quo so it can go for another hundred year.

That's why I'm voting no.