On Wednesday, I was obliged to try and get my head around the European debt crisis. I exchanged emails with the Law Commission over the publication of its first post on reform of media regulation, and the precise wording of an associated disclaimer. And that was before I had an hour-long meeting with three brain scientists. Seriously.

I am due some ephemera; some small found things upon which to muse.

On Wednesday night, after the Media7 recording, I went out with my friends Andrew and Paul. We drank, we ate well at the Canton Cafe, we drank, and we took a taxi to the Wine Cellar on K Road to see David Merritt perform poetry.

Somewhere along the way -- the taxi? the loaf of bread I bought at 1am? -- I received a five dollar note in change. I didn't look closely at the note (who does?) until the following day at the vegetable store when I took it out to pay for bananas, a lime and onions and saw it bore several lines of tiny script across the penguin side. I put back in my wallet and paid by Eft-Pos.

I photographed it later: 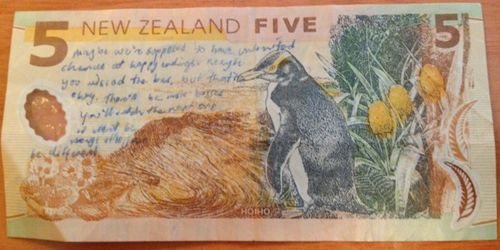 Even with my reading glasses, I struggled to transcribe the lines, but it was easier from the photograph:

Maybe we're supposed to have unlimited chances at happy endings. Maybe you missed the bus, but that's okay. There'll be more busses [sic] Maybe you'll catch the next one. It won't be wrong it'll be different.

It's like a sort of note in a bottle, set adrift on the seas of commerce. I approve of this.

The Media7 show screened last night and is available for viewing here. You will, I am sure, appreciate the perceptive commentary of Giovanni Tiso and Rod Oram on the realities of the Greeks and their debts.

But I would also draw your attention to my excellent shirt. It's rayon and it came from Strangely Normal on Tuesday. People remarked on it all night, and my mum texted me this morning:

Mothers always like to feel their sons look smart.

The brain scientists? I was talking to them as part of the preparation for Mind Reading? The Science of Imaging the Brain, an event at Auckland Museum on the evening of Wednesday March 14 presented by the Centre for Brain Research and the Centre for Advanced MRI as part of Brain Awareness Week.

It'll feature actual MRI brain scans ( it proved too hard to do these live at the event, so we'll have videos and a "big reveal" format): can our experts tell the difference between our subject's authentic memory and his made-up one just by looking at his brain?

I'll be the MC and I will aim to do my part in making it not only an informative evening, but an entertaining one. Tickets are ten bucks on the door (or phone 306 7048 to pre-book). Y'all should come along.

So, yes, on Wednesday night, Andy persuaded me to come along to David Merritt's poetry show at the Wine Cellar, announced only that day on Facebook. I'm very glad I did. Sitting comfortably in a room full of oddballs and listening to Dave and his legendary accompanists, Chris Heazlewood (King Loser) and Peter Gutteridge (The Clean, The Great Unwashed, Snapper) was most enjoyable.

I got a little video of Dave's final reading, 'Datura'.

I would have captured some video of Heazlewood and Gutteridge hunched afterwards at the front of the stage, conjuring holy tones from their guitars, but I was too distracted by the airhead next to me, trying to impress the young woman with him by talking loudly and incessantly and idiotically (I'm asuming methamphetamine was involved, although I suppose it's faintly possible that someone could be that much of a moron without chemical assistance). Sure, there's always a risk of this kind of thing after midnight on K Road, but ... really.

I did get a picture that captures the atmosphere: 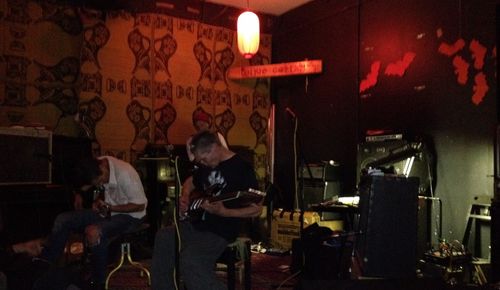 It is not, I wish to add, that I mean to be censurious about good-humoured bad behaviour. Hey, I'm embedding Home Brew's new video for 'Yellow Snot Funk', aren't I?

And with that ... what's in your pockets?