In the development of the Macintosh computer, Steve Jobs infamously corralled the Mac team into something between a hostile faction and a cult, in the belief that the Mac needed to be created in isolation from the interests of the rest of the company he had built.

It added to the perception that he was an unmanageable lunatic, which eventually led to him being thrown out of his own company, but it was probably the right call.

By contrast, Apple Music, the "revolutionary" service launched this week, feels like like it was created by at least two distinct interest groups within Apple. No, let me rephrase that: it's like a company made a butterfly and then took a dump on it.

My Day One Apple Music experience didn't start particularly well. The "Try now" page on the local Apple website told me I need to update iTunes – and then linked me to a page that contained the same version of iTunes I already had, which did not support Apple Music. Just as I might have become angered, the App Store popped up with an upgrade to iTunes 12.2. It came as part of a fairly hefty Mac OS upgrade and Apple's normally-champion CDN was, understandably, breathing hard on launch day, but it didn't take too long.

The sign-up, in the best Apple tradition, was spookily easy and I was quickly into a couple of screens where I was asked to declare basic taste parameters as to what kind of music I liked and then specific artists (localised to include UMO, Gin Wigmore and Opshop). 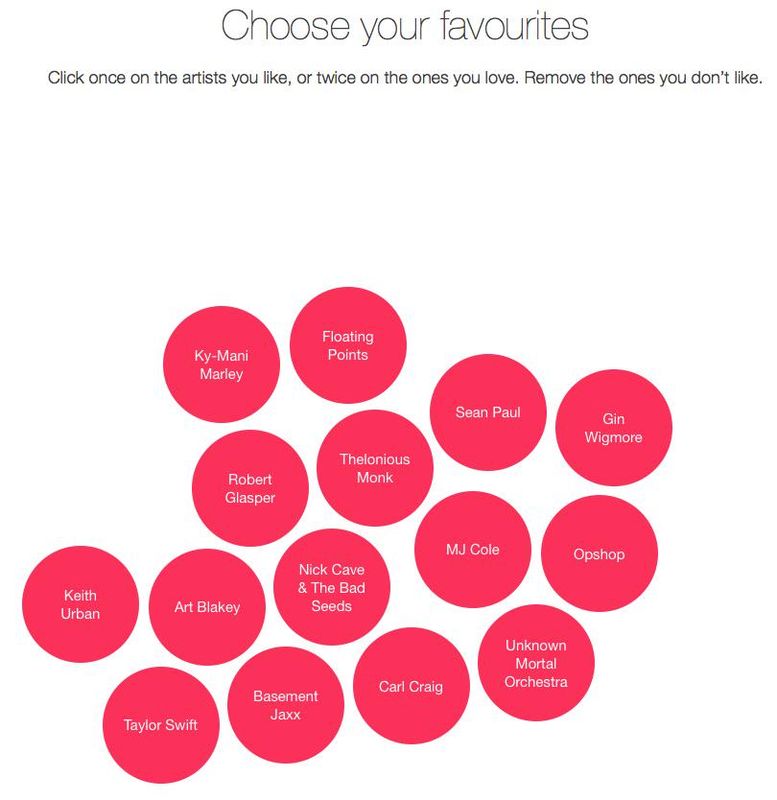 Then, I was in – and it was pretty sweet. "For You", one of four new Apple Music-related tabs at the top of the iTunes window, was a bit dad-rock, but the "new" tab presented me with new music I was actually interested in in a way that Spotify never, ever has. On the "Radio" tab, the Soundsystem station immediately clicked for me and Beats 1 sounded as lively as I'd hoped. The whole thing was seamless, natural and pretty.

And then I tried to do something pretty basic. I tried to save an album (Toro y Moi's new one, What For?) for later play. I clicked the "..." menu next to the album title and tried "Add to My Music". If the album had been added to "My Music" (ie: my existing iTunes library) I couldn't see it. So I tried click the "+" symbol, whch apparently filled the same function. Still no luck. So I went back to "..." and tried "Add To", which showed all my existing iTunes playlists, but gave me no option to create a new playlist to create a new one for the album.

I tried exiting to old-fashioned iTunes and created a new playlist called "Toro y Moi" in my "2015 albums" playlist folder, then adding the album to that. It looked like something had happened, but when I checked there were no tracks in it. I was invited to add tracks to the new playlist separately, but I still couldn't find the tracks I wanted to add in "My Music".

At some point I switched off iCloud Music Library to see if that helped. It didn't, but when I switched it back on I realised that the tiny rotating circle to the right of the iTunes title bar was signalling that iTunes was scanning my existing library for the cloud, a la the dreaded iTunes Match. It took about 45 minutes to do that and then, without asking, started uploading all the tracks in my library that it couldn't match – gigabytes of them – which I really was not in the mood for.

But when I stopped that, the one EP that I had managed to get to display in My Music (Golden Features' XXIV) – which I'd had to painfully drag up a long column of playlists for put in my 2015 Albums folder, because there's no way of saving an album into an existing folder – greyed out and became unplayable. I seemed to have switched off iCloud Library again by halting the unwanted uploads. So, back to the start.

Eventually, once iCloud Library was finished, I was able to see tracks I saved to My Music. I could save a track I liked from Radio (which is an great feature), but I couldn't save it to a playlist, only to My Music. So as a workaround, I dragged tracks from "Recently Added" in iTunes to a new playlist I'd manually created. But surely it wasn't meant to work like this?

Through all this, I kept going back to the albums I'd tried to save. And each time, I had to dig them out. Although there was a "Recently Played" for Radio stations, I couldn't find an equivalent for albums, playlists or individual tracks, even those I'd apparently saved, within Apple Music. (I say "apparently" because the tick symbol signalling an album had been saved kept defaulting back to a "+" and I genuinely had no idea what the hell was going on.)

But I had made progress. I'd been able to create a playlist and add tracks to it, and I'd added an album to my library, albeit painfully. So I updated my iPhone (another long download), ticked my new playlists and tried to sync my phone with my library.

Apple Music tracks can't be synced to another device in the customary iTunes fashion. Instead, you need to depend on the magic of, gulp, iCloud Music Library. Result: duplicated playlists, the unwanted chaos of being forced to see my whole, unruly iTunes library "merged" with the existing library on my phone. I didn't have the heart to work out whether the duplicated playlists on my phone were the same ones duplicated (and even triplicated!) by iCloudMusic Library in my desktop iTunes.

And I still couldn't see the Apple Music playlists I'd been trying to add to it.

So I made sure I had "Music Available Offline" (meaning only music physically stored in the device is visible) checked, but it turned out that this is overidden by iCloud Music Library. And if I switched off iCloud Music Library, that disabled any ability to save anything from Apple Music to my phone. Not just for offline play – any kind of playlisting or bookmarking from the phone itself.

So we're left with a situation where any kind of persistence is hugely problematic, and I'm inclined to think the problem is iCloud. Apple has been nagging its customers to use its cloud service for a while now, even though the target market – Apple-infused knowledge workers who want to seamlessly pick up and put down their three or four Apple devices – must surely be a subset of the whole customer base.

I dunno, maybe similarly there are iTunes users – on Mac OS and elsewhere – who have neat and tidy music libraries that they largely bought at the iTunes Store and absolutely adore having it all perfectly replicated, from device to device, in the cloud. Or perhaps young Spotify users are quite used to have no music actually stored on their devices. But among the real-world music fans Apple claims to be targeting? Not so much.

It really does feel like a good streaming music service has been forced to serve the company's overarching strategy and has suffered badly as a result. The odd and slightly encouraging thing is that it's quite fixable, even within the three-month free trial period. Apple could ...

• Get the fuck over integrating Apple Music with users' existing libraries. As currently executed it's not a feature, it's a bug. At the least, just give us the option to maintain separation. It's no big deal.

• Build some kind of persistence into Apple Music itself, like any other streaming service has. It's absurd that I can't easily revisit albums and playlists I've saved (or even listened to) within the service itself.

• Alternatively, add an "Apple Music" tab to the left-hand column in iTunes, like the pointless "Purchased Music" one that's already there.

• Sort out basic UI flubs like not being able to save an album to a new playlist, or save a Radio track to any playlist. Jesus Christ, this should be basic.

• For God's sake make it possible to save something I've listened to – as a streaming link and as tracks playable offline – on a mobile device without forcing me to accept some broken version of a desktop iTunes library I never wanted on my phone in the first fucking place.

I haven't covered Connect here – because it's not all that important as user experience for now – or family sharing, because I signed up to a family account and I just can't face that part at the moment.

But I'm interested in other people's experiences, and in whether there's something I've missed or done wrong. I would aso note that there's no harm at all in downloading the new iTunes, signing up for the three-month trial and having a play (you can listen to the Radio service without even signing up). It's a pretty sweet experience in many respects.

After all, it's only a disaster if you try and make it do any more than simply play you music.