It's been a while since I approached an Olympic Games with less anticipation than the current one. And that was before someone I know had to escape from Rio because her boyfriend got kidnapped and extorted by police and their lives were not safe anynmore. Basically, Brazil seemed to have way too many problems to be holding hands and playing handball.

The spat between the Olympic broadcast rights holder Sky Television and newspaper editors didn't help either. Unwilling to sign away their fair-dealing rights-in-law to show 90-second clips from the coverage in news reports, the papers were thus denied acccess and cancelled their own reporting from Rio. It all seemed to point to an Olympics that few people would care about.

But it was impossible to dislike Saturday's opening ceremony. The colours were bright, the art direction and design were strong and that Olympic flame sculpture was a sort of psychoactive substance unto itself. Even the endless parade of athletes was oddly mesmerising. (I would have mocked the uniforms of the teams from Norway and Sweden, but as a New Zealander I'm not in a position to mock anyone's kit.)

And there is something about watching sport in state-of-the-art bells-and-whistles HD. Sports you might not usually see – in particular, sports played by women. There is, for example, an internatonal women's Sevens circuit, but the coverage is average and generally tucked away where you won't see it. Sevens in Rio looks fab, the crowd is having a proper party and our team, the Sevens Sistas, look fast and fit; none more than Tyla Nathan-Wong, who seems perpetually poised to perform a handspring.

She also tweeted this lovely picture of her mum and dad: 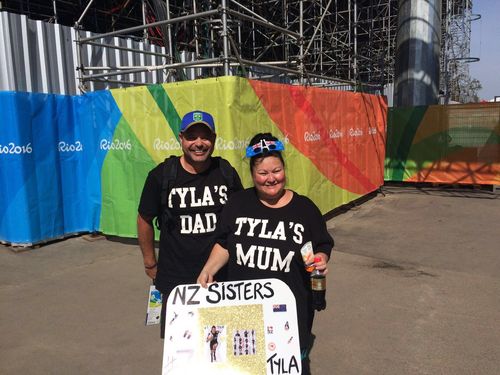 Elsewhere, we have that most affirming thing, a legitimate refereeing grievance. Football Ferns captain Abby Erceg received a completely bizarre red card in the course of her team's 1-) win over Colombia:

Surely Erceg's red card should be rescinded and the Colombian player Tatiana Ariza should be disciplined for attempting to deceive officials? I dunno though. Football seems to take a different view of these things.

There has also been an expression of continuity with tradition. As ever, the horse-parking round proves to the New Zealand equestrian team's achilles heel. Er, hoof.

Further in keeping with tradition, a young Australian sportsman has been a bit of a dick, allowing us access to our our own perceived national virtue of being sporting good sorts. You can't moan.

So yeah, take me to Rio and its nine channels of pin-sharp colour and graphic gizmotronics. Let's see how it goes.