Looking back, my weird food habits started long before they officially became a “thing” that needed fixing. My Plunket book is filled with notes on my inability to take milk or the majority of the alternatives. I couldn't stand bananas and cheese was probably my least favourite food. I have a vivid memory of being forced to eat peas by a babysitter until I was sobbing at the table, and to this day I can't stand them.

As a kid, I was also pretty much obsessed with mushrooms. On family outings to Cobb 'n' Co, my go-to order would be a bowl of mushrooms. I'd choose them over almost anything.

They're still definitely right up there on the list of pretty damn good.

Which is maybe one of the reasons Andorra is now right up there on my list of places I want to see some day.

The European country is a tiny landlocked space, neighboured by Spain and France. Spanish, French and Catalan influences dictate the food, largely due to the fact that the mountainous terrain means that about two per cent of the country is really viable agriculturally.

You know what else those mountains mean, though?

Mushrooms. A whole lot of them. So many, in fact, that come Autumn, Andorra plays host to the Festival of the Noble Mushroom (Fira de Bolt). Not only a festival celebrating mushrooms, but a festival with a truly great name, too.

If great naming ability and a festival dedicated to celebrating the noble mushroom isn't enough reason to visit, the population of around 80,000 has one of Europe's highest life expectancies at about 80. Education is free, Healthcare is funded and there are currently about 12 full-time members of the military, whose primary role is presenting the flag at official ceremonies, (the military hasn't engaged in combat in about 700 years).

So, for Andorra, if you're wondering, I cooked mushrooms. 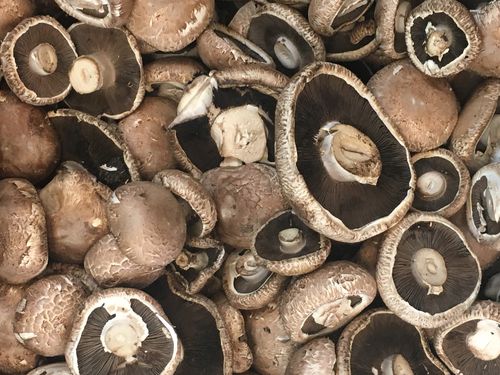 Mushroom omelet in fact. Which made me a little nervous. I pride myself one that can cook the perfect egg on demand. However you want your egg, I can master it. Unless you ask for an omelet. Then we're both in for a world of pain. I've tried, more than a few times, but I've never been able to master the whole flipping thing.

For someone that prides themselves on cooking eggs like a pro, this is a tough admission to make. You've been warned.

So the omelet. Ingredient-wise, it's pretty simple. Saute shallot in butter with salt and pepper. Stir in a couple of cups of sliced portabella mushrooms with a good pinch of tarragon. Set aside.

So far so good. Now for the eggs. Whisk and pour into a pan with butter.

So apparently, when the egg starts to cook, you pull in the outer sides with a fork, letting the egg flow over and cook under it. At this point I think I was pretty much nailing it. And that for the first time ever I might make an omelet that isn't a massive failure. 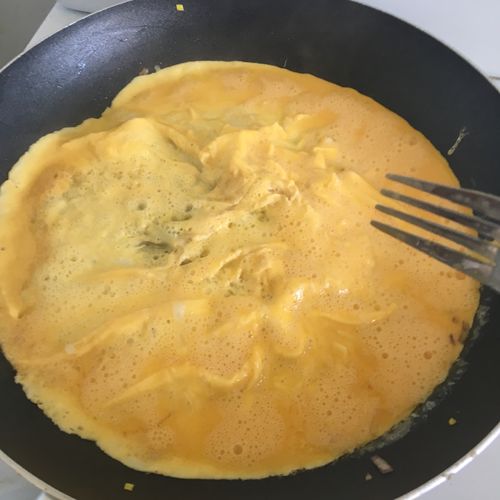 When egg is pretty much cooked the mushroom mix goes into one half and, while I'm still not a cheese person, if you are, go nuts on the Gruyere here too.

Then use a rubber spatula to flip, tilt and transfer to a plate.

And then everything fell apart. 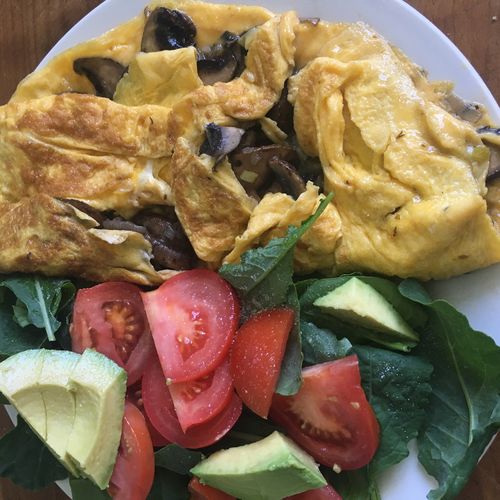 As far as taste goes – eggs, mushrooms and a bit of french flair with the taste of tarragon coming through – there's really no going wrong with that.

Look-wise, this  will likely be a cause for a few restless sleeps in the near future.

Any tips much appreciated. I'm keen to master this one.

It's gonna sting for a while.