This post is more about eating disorders than Angola, or Angola’s less-than-appetising national dish.

Which largely explains why it’s taken me more than a year to actually cook, and write about it.

Remember when you were a kid and refused dinner, and your Mum would come out with the line about starving children in the world who would love the chance to eat what you’re refusing?

For years, when I was in the deepest point of my eating disorder, that line would be in my head constantly. Often I’d be in an uncontrollable binge and purge cycle from morning till night. And the guilt would drive me insane. I was acutely aware of the fact that my particular issue was one that those “starving children” would be horrified at the idea of. I’d often think of kids that couldn’t get a single decent meal as I literally made myself throw up every single one I had. And I hated myself for it.

So I’d been dreading a country like Angola from the moment I started this project. And, as expected, simply the idea of making funge (literally cassava flour and water) scared me. So I put it off a week. Then a month. Until it’s now more than a year later. And I remembered that a huge part of starting this project in the first place was to face these kinds of fears and barriers around food.

So here we are.

Angolan cuisine is largely influenced by Portugese flavours, but its national dish – funge (or funje) is eaten, especially in poorer areas, at most meals. It’s often eaten with some kind of meat, but tends to be the filling and readily available component. Angola’s life expectancy is low, its infant mortality is high and its standard of living is pretty dire.

When I started this project I wanted to make sure I found dishes that are found in traditional, common households, rather than food adapted for tourists or more privileged than most.

So funge it is.

Funge is about as appetising as the name sounds. It’s made from cassava flour and hot water, traditionally stirred in a giant pot on the floor until it turns to an almost porridge-like consistency. (To be fair, "porridge-like" is being pretty kind to funge. It’s basically slime. I know, right? Yum.) It’s kind of grey and apparently salt is a bit of a luxury in the African country of Angola as well. So ... cassava flour and water it is.

Which was another hurdle to climb with this particular dish. When I first began recovering, my list of safe foods was small, and completely flavourless. I’d eat a piece of dry toast, but would be terrified at the idea of even a bite if it had butter or spread. I refused to add flavouring or sauce to anything. Oil was completely off the cards. And I was terrified of salt.

These days I’m a salt fiend. I use oil with almost everything and a dish without spices is a sad affair.

And the thought of flavourless, salt-free, empty carbs brought back that illogical feeling of … fear. So again, I put this project in the back of my mind.

If, like me, you don’t have time to sit on the floor stirring a pot of cassava flour and water, I found a cheat recipe. If you do have the time, I’d suggest using the cheat method anyway. Don’t worry, you can use all that time trying to clean up once you’re done. This stuff sticks to everything.

Whisk together one cup of cassava flour (or tapioca flour works) and one cup of cold water, until smooth. Add to a pot of one cup of boiling water and stir on the heat for about 15 minutes until the mixture become thick and sticky and really unappealing-looking. 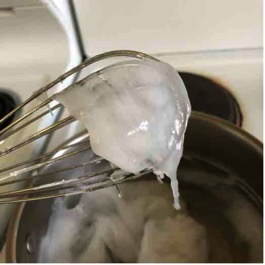 This, my friends, is funge. The texture is sticky, gelatinous and paste-like.

The flavour is bland – as expected. Bland is also being pretty kind to this particular dish. It literally tastes of nothing.

The dish is often mixed with more spicy and flavourful meat dishes (when available), which does make it more palatable (only because it hides the texture and taste – or lack thereof). But generally it’s a filling, flavourless dish that I’m pretty sure I won’t be adding to my list of go-to recipes from here on in.

I tried it though. And that’s what matters, right? 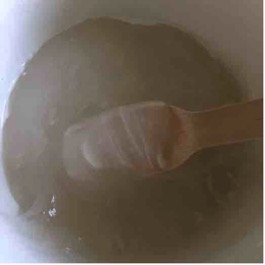