Other people’s two-year-olds seem very quiet in comparison to my own.

A friend’s two-year-old recently told me that “tidying” was one of his favourite occupations (I checked with his parents: it was true). A playground mother amazed me with the claim that she looks forward to rainy days, so that she can spend “silent indoor time” with her pre-school children.

You would have to be very deaf indeed to have any “silent indoor time” with my children. As a two-year-old, my son, Bob, would regularly achieve the same levels of quietness as having a V2 missile hit the house.

On rainy days, his preferred method of entertainment was to have me swing him in circles by his heels, and then flip him yelling into the air, so that he somersaulted once (or preferably twice) before crashing onto the settee. He would happily partake of this activity for hours.

It was the sort of child-care technique that I always imagined might be difficult to explain at an Accident & Emergency ward; and it really didn’t do my sore back any good either. One wet afternoon, ravaged by spinal agony, I attempted to distract him with an episode of the Thunderbirds television programme. Bob was indifferent to the plot, but entranced by the launch sequences. He immediately demanded a personal re-enactment—and that was how we discovered the Palm Tree Game.

Here’s how you play. The first rule of Palm Tree Game is that Bob is the “director” (in the mode, some would say, of a highly-strung Werner Herzog-style auteur). Bob’s first directorial instruction is to flip him upside-down in order to simulate Virgil Tracy’s egress via the life-sized portrait. Then Bob is dragged across various bits of furniture to recreate the journey down the chutes, and eventually lowered into his pilot’s seat.

At this stage, in a rather avant-garde move, our point of view is altered so that Bob becomes Thunderbird II itself. A cushion is raised to allow him to exit the hangar, and the director’s assistant is required to lie on the ground with both arms upthrust so as to represent coconut palms. The coconut palms are retracted as Thunderbird II stomps heavily down the runway. The exhaust hatch is opened. Thunderbird II bounces a couple of times on the runway’s stomach, and is then launched into the air with a wild cry of “Thunderbirds Are Go!”.

Did I mention that the director’s assistant is required to sing the Thunderbirds theme at the same time? Try doing that while a two-year-old bounces on your stomach. Imagine being criticized for inadvertently going “Oof!” instead of “Dum Da-Da Dum Dum”. Then being told that your “Oof!” has ruined everything, and that the launch sequence will have to be restarted from the beginning. Herzog only demanded that scenes be repeated a few dozen times; I was forced to become a palm tree on hundreds of subsequent occasions.

Sunny days with two-year-old Bob were much less emotionally intense. We would often indulge ourselves with a gentle bike ride beside the river. Bob would entertain me with shouted philosophical observations. “Look at those lovely flowers, Daddy,” as we glided past an elaborate council garden of tulips and violets. “I could come here one day and do a wee on those.”

The riverside parks had particularly good swings. In the finest Thunderbirds tradition, Bob eventually developed a swing launch sequence that involved a countdown, blast-off, and various booster stages. “I’m in orbit! I’m in orbit!” he would squeak, as the chains swung past the horizontal point, and gave him a nice bump at the end of a push. His shadow rocketed across the lawn; the sun made a halo of his wild two-year-old’s hair.

Sometimes, when intending to meet Jennifer after work, we would cycle as far as Riccarton Bush. This was dangerous territory. Wildlife and verdure seemed to give Bob an irresistible desire to exert his mastery over nature.

On one occasion, an elderly lady took a kindly interest in Bob. “Did you know that there are kiwis in Riccarton bush?” she asked. “Would you like to see a kiwi? ”

Bob nodded enthusiastically. “Yes, if I saw a kiwi I could shoot it with my gun, and its head would explode. Ha ha!”

I attempted my own chuckle of laughter, as if to imply that Bob was indulging in sophisticated two-year-old irony, and then grabbed his arm to beat a hasty retreat.

On another occasion, we met a mother and her children in the kahikatea grove. “Look at these magnificent trees, everybody,” said the mother. “Let’s all just sit here quietly and soak up their majestic beauty.” A deep silence followed her announcement. Into this silence Bob felt moved to make a contribution.

Bob: Those trees are very tall.

Bob: [loudly] Daddy, you should go and get your chainsaw and chop them down.

One of the biggest difficulties in looking after a two-year-old is the lavatory. Not in terms of the two-year-old’s lavatorial needs, but rather your own. Biology dictates that you sometimes require a few minutes by yourself.

When this happens, you need to ensure that your child is safely occupied, and then operate at top speed. Parental instructions issued from a lavatory are difficult to enforce; unnecessary lingering almost always leads to disaster.

Me: [while sitting on the lavatory] What’s that noise. Are you playing with the taps? I told you not to play with the taps.

Me: Well, whatever you’re doing, don’t play with the taps. We don’t want a repeat of what happened last time.

[The sound of a splashing—as from the sluice-gate of a medium-sized hydrodam—suddenly reaches my ears.]

Bob: [wailing] Daddy, I’ve made a waterfall and it won’t stop!

I found summer evenings with Bob as a two-year-old to be particularly pleasant. We would often climb the weeping elm in our front garden and do our bedtime reading amongst the branches. Bemused pedestrians would gaze skywards in surprise at my disembodied voice.

Of course, the trick with bedtime tree reading is in the extraction of your children afterwards. Unless I was very quick, Bob would clamber into the upper boughs, almost invisible in the greenery. “No, I’m not coming down. I’m living in this tree now. I don’t live in Christchurch any more.”

The actual insertion of Bob into his bed was, happily, the department of my wife, Jennifer. Few things are more relaxing than listening to someone else deal with your protesting child. As the harsh reality of bedtime hit home, Bob’s arguments in favour of postponement would become increasingly surrealist. I have long treasured this particular exchange:

Jennifer: Do you have an issue with going to bed tonight?

Bob: I have three issues: cutting up trees and throwing them down a waterfall; digging up dirt and raining it on snow penguins; when we're asleep and crocodiles come into our bedroom.

It’s hard to argue with that; although I believe Jennifer did her best.

I feel rather sad that I haven’t been able to indulge my two-year-old daughter, Polly, to the same extent that I once did with Bob. There have been no gentle bike rides beside the river. Her two-year-old’s life has been packed full of building, plumbing, electrical work. She knows the difference between a scrulox and a pozidriv screw; she can trot off to the workshop and bring back the builder’s level or the electric plane.

This is, I suppose, my greatest personal loss from the earthquakes and the bureaucratic disaster that has followed. Eighteen months of seven-day weeks and long working days is a lot of missed time for a two-year-old. There’s no way of getting it back. 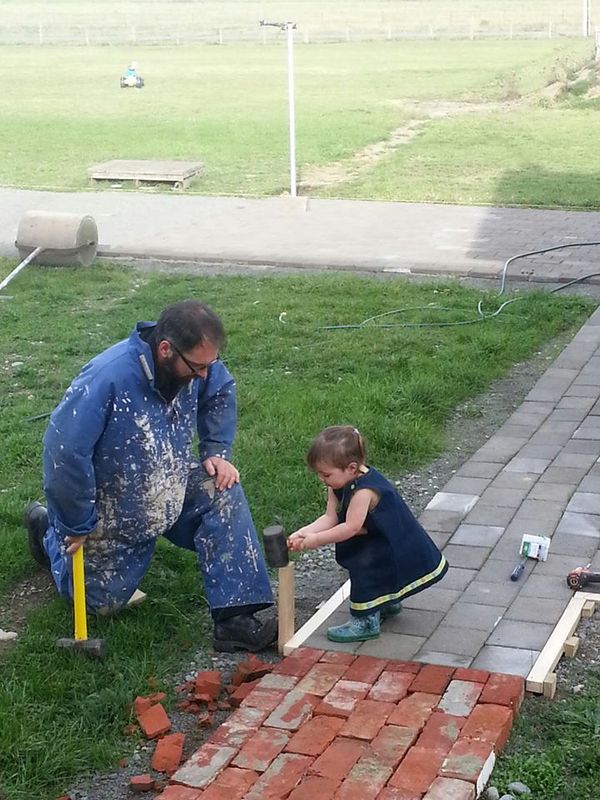 Above: Polly assists with the paving.