I don't know if you've ever played around with DJ software, but here's the thing: for ordinary home use, most DJ apps suck. I'm not saying they're lacking features, I'm saying they are weighed down with way too many features, invariably crammed into a crowded UI that says anything but the word "party".

I'm not saying it's bad that you can pull off an hour of meticulously beat-matched techno with loops, samples and whatnot. Clearly, that takes practice and skill. And it's all about you. But the reality is, you're not Derrick Carter and the ladies at the party would actually quite like to hear 'Buffalo Stance'.

I've been having a play with several DJ apps in advance of a soiree at Dubwise Towers, and Mixxx and Virtual DJ (Home) are astoundingly fully-featured for free applications. They both have active user communities and Mixxx is open-source. It's great that they're around. I just can't see me having a good time poking at them after a few drinks or whatever.

So I wound up back with Algoriddim's djay, the first DJ app I ever used, at first on a Macbook and then on a first generation iPad. The extension into the world of iDevices has, I think, galvanised the developers, because the once-stalled Mac OS version is better than ever.

Mixx and Virtual DJ both support Airplay, but both do so in confusing and non-apparent ways. djay just has it right there in Preferences > Devices. There are various ways to set up a separate cue feed, iCloud access, an iOS remote app and support for a range of hardware controllers. But here's the main thing: it's not an active design crime: 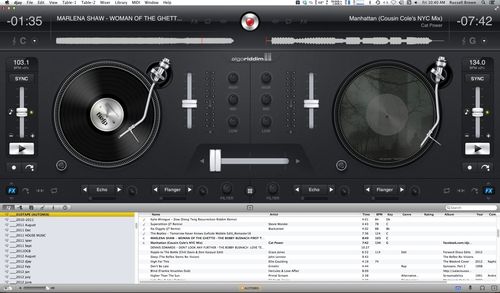 The virtual decks look good and work well and the iTunes integration won't burn your eyes out of their sorry sockets. It's not free -- it's $24.99 in the Mac App Store and the iOS remote app is a further six bucks -- but it delivers what we ought to expect from a dedicated Mac OS app: not only function, but form.

Ladi6 is back, with the first look at a forthcoming album. It delivers the grace, soul and strength we've come to expect:

Nowhere near as polished, but full of fun and potential, Monax and Possum, a duo recently expanded to a trio. It's like some movie set-up where the girls from the club go in and make a rap record and it totally surprises everyone:

Meanwhile, jousting with Christoph El Truento on a daily basis for the top slot on the voted TheAudience chart, Chess Countess, who does a kind of theatre-pop rap. It's some realised shizzle:

I noted last week that 16 year-old Lorde had officially shifted from the building-profile to the selling tunes phase of her carefully managed career. And I hear that after an incredible 60,000 free downloads of her The Love Club EP, the same record has sold strongly in its first week. Don't be surprised if she's number one in the local charts come Monday. And much bigger than that in six months' time.

The Guardian has an interview with Agnetha Fältskog, formerly, of course of Abba, who explains that she has never actually been the reclusive Garbo-like figure she's supposed to be. It's in aid of a new album, whose first single is this thing:

It's not bad for what it is, I guess, but it's also a perfect demonstration of what modern-day popsong science, with all its key changes and storming chorus action, gets you. It's all designed for an auto-tune-assisted foghorn and pretty much tramples over what still seems to be a perfect pop voice. It's a shame no one's ever got her together with her fellow perfect-pop Swedes at the Labrador Records label. That could be magic.

On the dancefloor: this week's Bobby:

And for the second week in a row, this awesome edit of Luther Vandross' 'The Rush' (which combines the David Morales 12" mix and the dub of the original), just because I'm slightly obsessed with it. When Luther pleads "This is scaring me!", that's passion.

And a fab new re-edit of The Commodores' 'Machine Gun' (which older readers will know as "the theme from RTR"):

It also comes with a hella fun video:

Finally, today marks 15 years since Darcy Clay -- aka Daniel Bolton -- died. It was tragic that such a sweet kid couldn't stay in the world, but extraordinary that in his short time making music he created the song voted number one in the entire history of the station by 95bFM listeners:

Peter McLennan marks the day by republishing his 1997 interview with Darcy, which will also feature in Peter's forthcoming book I Believe You Are A Star, out in May. Be evil, play it loud.

I have two copies of the new CD by Atoms for Peace, the unlikely supergroup formed by Thom Torke and Flea from the Red Hot Chili Peppers to give away. Click the envelop icon under this post and email me with "Atoms" in the subject line. I'll draw the winners later on.