Morena! All being well I will have crawled out of bed and hit "publish" on this post after a late one at the VNZMAs and I am now preparing for the very important job of having a couple of wines later with a friend and colleague. As a further excuse, my hard drive died and I still don't have my proper work computer back. What other possible option is open to me? Exactly.

But tomorrow, I will be at Real Groovy Records to join in celebrating 45 years of 95bFM. There's a live broadcast and stuff going on all day, including the release of Darcy Clay's 'Jesus I was Evil' EP for the first time on vinyl. The six tracks will be performed by Darcy's original band with guest vocalists, from about 2pm.

And I'm here to tell you that Buzz Moller will be vocalising 'Joelene' in the style of Darcy, Matthais Jordan will be sing 'What About It' and Emily Littler will also do a tune. And the singer lined to pay tribute to 'Jesus I Was Evil'? Only Mr Mikey Havoc.

It's really great that this release is part of 95bFM's current Bombathon pledge drive, because he's part of that story. As this great 2008 Sunday Star Times story notes, it was Bill Kerton at bFM who put his demo tape to air, and years later, when b spent a weekend counting down its 95 greatest tracks, number one, as voted by the listeners, was 'Jesus I Was Evil'. They called his dad on air and he was so pleased and proud.

I remember him, Daniel Bolton, as a sweet little guy with a lot going on in his head. Too much going on, in the end. I think the last time I saw him was on a bFM bus Breakfast, smiling, with a beer. But I still love that handful of songs he made. I heard this one on the b the other day and thought, man, that's mint ...

This has been doing the rounds on my Facebook network. Matthew Barnes spent too long on hold with IRD and snapped. (Note that I'm mates with both Dave and the Exponents and I'm pretty sure they'd find this as funny as everyone else.) 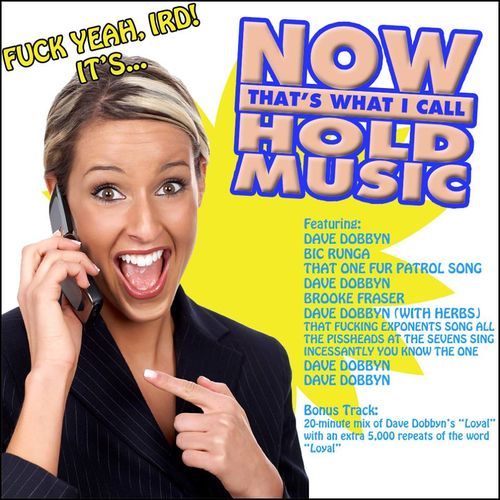 Aly Cook's Alan Jansson-produced album Horseshoe Rodeo Hotel came and went a bit earlier this year. But the single, 'Midnight Cowboys' this week shot to the top of the Australian country chart. It's a very Janssonesque pop-country hybrid: drums, a strum and a catchy-as-hell chorus. But the co-writer is actually Brent Hayward, aka Fats White. I recall him telling me at a party more than a year ago about this special song he had. And here it is:

The Unofficial Flying Nun Vault has come up with something a bit special. The Enemy, live at Beneficiaries Hall, Dunedin, 1978. It's fierce. And as Simon Grigg said to me, you can see why they terrified all the local punkers when they hit Auckland:

Andrew Moore's great New Zealand skateboarding history No More Heroes has been recut with a new Flying Nun soundtrack and is finally cleared and available for purchase on DVD at the Flying Out store. Here's the trailer:

Sleepers Union (featuring Simon McLaren of Love's Ugly Children and Mark Anderson of the Onedin Line) are back with a new album. They launch it tonight at Golden Dawn, along with Soccer Practise, and I presume they'll be playing this catchy little number:

Also on tonight: Grayson Gilmour and French for Rabbits at The Tuning Fork. And The Great North take their (yet unrecorded and untitled) album preview tour to The Wine Cellar.

Thomston has his first new track since signing with Sony Music. It's in the alt-pop-R&B vein of previous releases, but a bit bigger and shinier. I'm impressed:

A new remix from Boycrush's Girls on Top EP: this is by Introverted Dancefloor (aka Bevan Smith) and it's some haunted house. And a free download!

And finally, it's not actually new but it's certainly seasonal. If you click "buy" on this sampler stream, you go through to same on Bandcamp where you can buy that and get Copycat's retakes of a swag of summer soul classics. He might be in New York now, but he's apparently still on southern time ...