Our electricity supply returned about 2.30pm yesterday, ending an outage that began around 9pm during Tuesday night's storm in Auckland. I was grateful: our official resolution time was 6pm and I was prepared to be disappointed given the huge number of outages our lines company, Vector, was addressing. Households only a few minutes away from our place in Point Chevalier did endure another cold, dark night without power last night.

We had been prepared, to an extent, when the lights went out. I'd taken note of severe weather warnings earlier in the day and it was becoming clear that something big was going on outdoors. Friends in Muriwai, exposed on the west coast, were anxiously swapping notes about when and whether it might be time to get out. Happily, the newest, most robust and weathertight part of our house in the city was facing the weather. But I hadn't thought about the prospect of us losing power until I saw this this tweet from Cate Owen turned up in my feed (ignore the incorrect-as-usual Twitter timestamp): 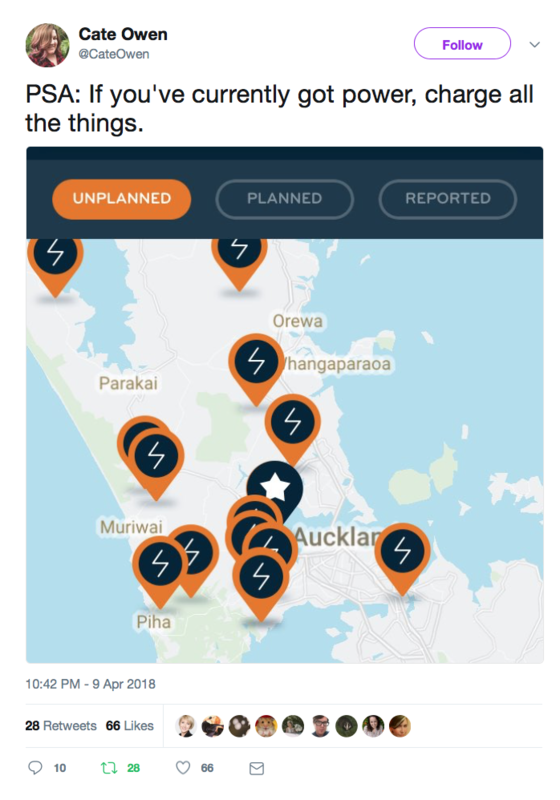 I let everyone in the house know and by the time the lights did go go out about 20 minutes later, we had the candles and torches ready on the kitchen table We'd all charged our devices for as long as we could, but with a fully-charged power pack and an even bigger battery sitting in the porch on my e-bike, our USB-chargeable things were actually the least of our worries.

What's notable here is that the first direct warning that our power might well go out soon came from Cate, an individual (albeit one who works in comms), rather than any of the official services. Vector and Auckland Civil Defence had sent early-evening tweets reiterating severe weather warnings, but neither of them were anywhere to be seen online as the shit started to hit the fan.

Cate's tweet contained a screenshot from the Vector app, which I quickly downloaded. I'm used to using the outages map on Vector's website (our inner-city suburb is no stranger to infrastructure failures and, unlike Watercare Services, Vector is pretty good at communicating the location and likely duration of outages), but it made sense to get the app on my phone, right? Like everyone else in Auckland, I discovered that it was working barely if at all. Screenshots other people posted didn't even show our outage.

Over the next hour, multiple people tweeted about seeing flashes of light from arcing lines and – according to one tweet – multiple transformers in Mt Eden blowing up at once. Someone else said they'd seen the whole North Shore go dark at once. But there was no official word about that – even the Herald's live reporting seemed very light on urgency and detail. The nearest was this tweet from Weatherwarch's Philip Duncan, who was active through the night. 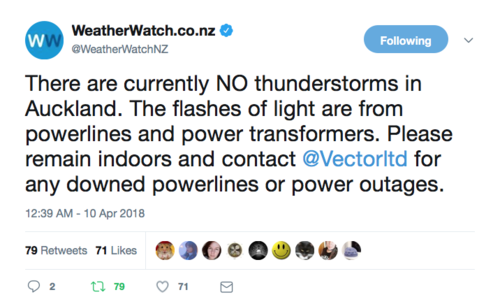 What I understand is that the ferocity of the storm and how quickly damage occured did take everyone by surprise. It may also have been the case that, in a summer of highly localised weather events, the impact was much worse in some places than others and that was hard to track.

At Vector, the app soon got overloaded as many thousands of users connected both to check outages and file reports of their own. When that didn't work, they turned en masse to Vector's call centre. The people who were nominally part of the after-hours Twitter team are part of the call centre, so they got caught up in that deluge.

Eventually, this slightly defensive message was tweeted out: 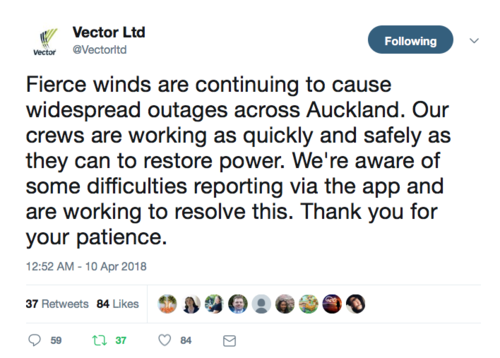 It wasn't really enough. Given the load problems being suffered by both the app and the call centre as around 200,000 homes and businesses (that's getting near half the homes and businesses in Auckland!) lost power, a steady flow of warnings, information and reassurances over social media channels where load isn't an issue would surely have been appropriate. And social media channels are, of course, two-way, which seems relevant when the reporting feature of the app was overwhelmed.

Auckland Civil Defence was worse, tweeting only once, very late in the piece and then later getting defensive, as its director John Dragicevich blathered about people's "common sense" but acknowledged some (shudder) "learnings" from the torrid night.

Dragicevich may have been as personally unsurprised as he says, but the appearance was that his organisation was caught unawares. Perhaps, like the rest of us, it may have had a touch of hazard fatigue. We get a lot of warnings, which is entirely appropriate, but there's a psychological tendency not to pay too much heed when many of them don't come to much.

Rather than posting a warning in advance then clocking off, the professional communicators at key organisations should be prepared to scramble when the shit clearly is hitting the fan. We've learned that in Christchurch and I thought official social media accounts did reasonably well during Wellington's tsunami scare in 2016.

In Auckland, the intensity of the storm clearly did come as a surprise, but the task for these organisations – especially as global weirding becomes the new normal for weather – is to make sure they can scale up very quickly from low-level business-as-usual.

My sense is that that conversation is already underway at Vector at least – and the work done in the past 30-odd hours by Vector's lines teams has been extraordinary. There are a lot of workers not seeing their own families so that households like ours have heat and light.

Anyway, we went to bed in the dark on Tuesday night. And when we woke it became clear to me that our own prep hadn't been all it could have. The relatively warm northwesterly winds of the storm had swung around to the southwest and we facing the coldest day of the year in a cold house. A cup of tea might have been nice, but I never did get around to buying one of those butane rings for emergencies. ("We can always boil water on the barbecue," I had thought to myself. Not yesterday morning in the rain we couldn't.) Happily, there was hot water still in the cylinder for a shower.

Something else became apparent: the mobile networks that had worked fine the night before were slow and flakey the morning after, sometimes stopping altogether. Was that a consquence of load in a powerless smartphone-owning suburb, depleted cellsite batteries, both?

As it turned out, there was a warm cafe only a kilometre away – the outage had not hit the whole suburb – and the bacon and eggs tasted great. I spent the rest of the day getting my hair cut in a powered-up part of Grey Lynn, then being taken to Prego for lunch (where the short ribs were a warming delight). I took pictures like this (a big gum tree near Countdown in Richmond Road had fallen, taking lines with it) along the way: 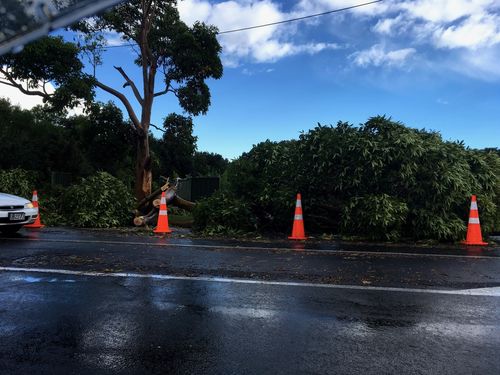 After lunch, I popped in to Bunnings for emergency firewood and a butane ring – the latter were sold out after a morning rush from powerless Grey Lynners.

As I said, I have friends nearby who may only get power back later today – and my west coast buddies won't light up till tomorrow. It seems evident that the longer-term fix for resilience will be the undergrounding of more lines (yes, Christchurch friends, your underground services broke in the earthquakes, but our doomsday risk is a volcanic eruption, which would also be unkind to overhead lines). But until then, yep, I reckon I'm going to reassess our emergency prep. And get one of those gas rings.