The highly-anticipated confrontation between Kim Dotcom and Prime Minister John Key at yesterday's  Security and Intelligence Committee hearing of submissions on the GCSB bill turned out to be mostly dull. The German wasted precious time complaining that his precious time had been cut, and then insisted using up the time he had by reading out a lecture.

It was not until the time was actually up that there was some real interaction between Dotcom and Key. It was on the matter of Key's insistence that although the January 22 raid on Dotcom's house took place in his own electorate and his own department was involved, he had almost no prior knowledge of it and had only learned of it the day before. From Audrey Young's account for the Herald:

Near the end of the 20-minute session, Mr Shearer asked Mr Dotcom if he thought Mr Key had known about Mr Dotcom before the raids.

"Why are you turning red, Prime Minister?" Mr Dotcom asked.

The tone of that exchange was in keeping with the petty, baiting manner the Prime Minister took with several submitters, but its significance was anything but petty. An hour and a half later, on Campbell Live, Dotcom said he would present evidence at his forthcoming extradition hearing that Key was lying about the extent of his forward knowledge of the raid. If the proof holds up, writes John Armstrong this morning:

... Key's resignation might well be in order. It is as simple as that.

But even so, Dotcom's submission was not the most important and rewarding part of the select committee. Before he arrived in a blaze of flashbulbs, some tremendous presentations had been made by people from the internet and tech community. Most notably, TechLiberty's Thomas Beagle, who responded inpeccably to the PM's "but what if there was a bomb and some children died?" question:

The active participation of geeks in civil society benefits everyone. Ruby on Rails lead Michael Koziarski confessed this was the first time he'd done anything like this, but seemed far from overawed:

Freshly-minted InternetNZ CEO Jordan Carter was excellent too -- and also responded well to more of the PM's weird, bad-faith questions:

Thanks to Scoop for providing these clips (there are more here on YouTube) and making them shareable. There has been a range of views on the coming formalisation of video coverage of select committee proceedings -- some people fear it will just lead to showboating. But on yesterday's evidence, I think it might also enhance political engagement in a very useful way.

I'm surprised we haven't heard more about what happened in the hours after the hearing: the GCSB's own website seemed to be attacked and taken down. I have significant reservations about vigilante attacks on public-sector websites -- there's a limit to what you can say with vandalism, and it can easly be counterproductive -- but this one was quite interesting in what it showed.

I'm hardly an expert, but this seemed to be some sort of DNS attack: the domain gcsb.govt.nz would not resolve. Mostly that brought up the standard Chrome message for an unresolvable domain, but it intermittently loaded this: 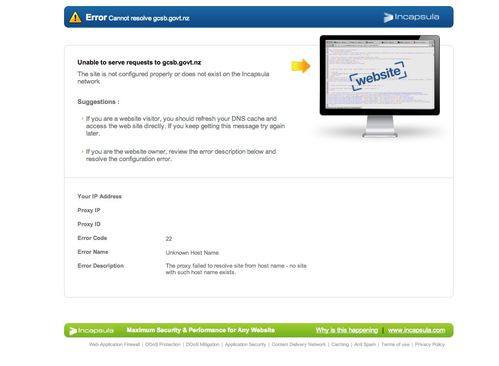 Incapsula is a cloud-based content delivery network (CDN) focused on security and the GCSB is purchasing its services. Its co-founder Marc Gaffan explains the way it works here. He also says this:

"We have DNS infrastructure that will point you to the address of the closest data center to the user," Gaffan said.

The actual user site DNS information is not hosted by Incapsula, however.

"We are not an authoritative DNS provider, so we don't host the zone file," Gaffan said. "From our perspective, there is no access for an attacker to poison our DNS."

That said, Incapsula does rely on the authoritative DNS provider that the user's site is already using.

So, assuming this was an attack, the vulnerability was probably with GSCB rather than its third-party CDN. Am I on the right track here, folks?

Late last night, the final Media3 of the current series went to air. It was a satisfying show to go out on: David Fisher, Peter Griffin and Adam Boileau brought plenty to the theme of journalism and spy (and spying on journalists) and the alarming problems with the current GCSB and telecommmunications intercept bills. It'll be on TV3 again at 10.25am on Saturday, or you can catch it here on demand.

We at Media3 will see you presently. In the meantime: got any work?