Ohhhhh, fancy. After eight years at Cracker HQ, I'd kinda got used to the brown corduroy couch, the wonky desk, the dial-up internet. But this is nice.  Oh, a widescreen TV!

I particularly like the feature picture thingy on the front page, so I thought I'd avail myself of that, even just for a little fishing tale. Unfortunately, for someone who likes to take photos, Monday's incredible fishing adventure was the second time in the last month I'd forgotten to take my decent camera along (the first involved a helicopter trip down to Lake Rotoiti for a beautifully sunny Labour Weekend) and was left with just my iPhone.

Still, even with a good camera, dolphins are incredibly hard to photograph, what with you never being quite sure where they're going to pop up. So even in the midst of a work-up, surrounded by dozens of the buggers, this was about the best I could manage: 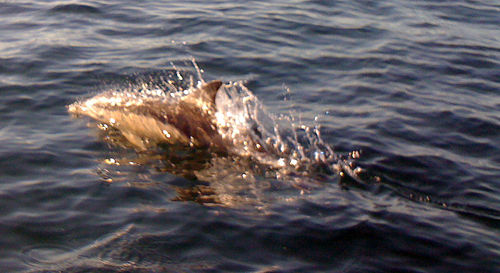 Photographic issues aside, it was an incredible day on the Gulf. Having a couple of mates with flexible/questionable employment status (and one with a boat) meant not fighting every other bugger on the weekend, so when Monday came around, and the sun was shining, we decided to head out for a look.

After motoring out for about an hour, at a depth of 45 metres we started looking for work-ups. For the uninitiated, a "work-up" usually signifies a big school of bait-fish, being furiously dived-bombed by flocks of gannets - an amazing sight close up - often picked off by dolphins and bigger fish. Where there are bait fish, there are usually Snapper down below.

So we squinted into the distance through the binoculars, looking for the tell-tale gannets. From a distance they form a giant T, as they dive in a column, then emerge from the water and then re-queue again at the top. As far as we could see there were plenty of birds sitting on the water, but no action above.

A random drop of the jig - we were using small jigs rather than fresh bait, far more pleasant than the smell of pilchards and squid turning rancid on your hands in the hot sun - turned up a decent snapper, but further drops proved less fruitful. We'd have to find that work-up if we all wanted dinner.

Not that it wasn't pleasant enough out there. The sea was glassy and the sun pounded down. Dolphins abounded, mothers with calves in numerous pods - more than I've ever seen out fishing before, and probably at least 100 all told. And then we spotted a wobbly dorsal fin off in the distance. What was it? An Orca? Some weird shark? We motored closer for a look, and I found myself just metres from one of my favourite fish - if it's possible to have such a thing past the age of 5 - and yet one I had never seen in real life: A Sunfish. 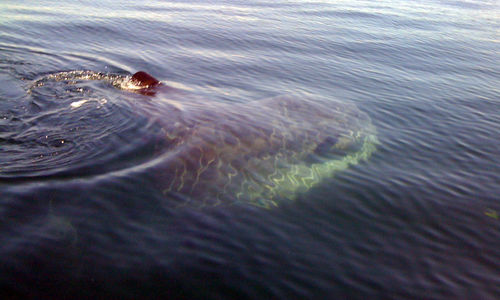 Again, not a great shot, but here's a photo which gives you a better idea what they look like, and how big they are.

Anyway, by the time we'd followed that around for a while (me because I wanted to spend all day with it and was seriously regretting not having a mask and snorkel; them because it was being followed by a few big kingfish they hoped to lure away), there was a change in the air. Birds started leaving, flying off in one direction. We followed... and found a work-up of massive proportions.

As we motored into the middle of the kamikaze gannets - big birds smashing into the water at great speed just metres from our boat - the excitement was palpable. We couldn't get our lines down quick enough, and as it turned out, the Snapper below felt much the same way. Before the weights hit the bottom the Snapper were on. All three of us we hooked at once.

For me, nothing quite says Summer like three reels screaming as the fish take off.

Fishing in a work-up is insane. More fish than you need, eager to jump on your line, but still keen for a fight. Your arm screams with the pain of constant winding, the bottom of the boat is covered in blood and still-flapping fish as you try and keep count to ensure you stay under quota.

Then another highlight. Fifty metres away, a Right Whale breaches. The first time I've ever seen a whale in real life too, even though they're common enough out on the Gulf, particularly in a decent work-up.

The day couldn't get any better. With our limit of well-decent Snapper on board (we'd thrown anything vaguely small, or particularly big, back - sustainability is key), there was no point fishing any more, so we headed for home. Even after a good day's fishing, the ride home can take a while, and you know that the next few hours will involve unpacking, washing the boat, and then gutting/scaling/filleting your haul - in itself a massive task. But it was still pretty hard to wipe the smile off our faces, and the thought of freshly caught Snapper fried in butter for dinner (and lunch, and dinner, and lunch...) and a couple on the smoker was certainly something to look forward to. 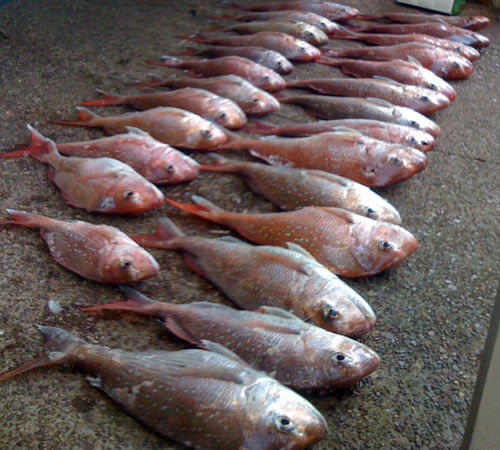 (If anyone's looking for a fishing charter over summer, my mate Steve whose boat we went out on is in the process of starting up a small customised charter business - only up to four people, very reasonable rates - drop me a line.)