The most piteous image of a life which has had more than its share of awkward moments was related in Paul Goldsmith's admiring biography of Don Brash. You know what I'm going to say: the loneliness of the long-distance corned beef. Ruth Laugesen recalled it in the Star Times when she met Brash after another marital setback:

Brash boils the jug and makes cups of instant coffee. The last time he was living on his own was in 1985, after his 21-year marriage to Erica Brash broke up in the wake of his intense affair with Je Lan, whom he of course later married.

Biographer Paul Goldsmith painted a depressing picture of those days, of a small Glenfield flat and a man awash with guilt. Every fortnight or so Brash would cut up a slab of corned beef into portions. And each night he would put on a pot of peas, his dinner plate with two slices of frozen corned beef resting on top. By the time the meat was defrosted, the peas were cooked.

This time, the surroundings are more luxurious. Some things don't change, however.

Brash is back eating corned beef. "I like it," he says.

He probably likes that instant coffee too.

I'm one of those people who is more comfortable cooking for 20 people than four; less of  a chef and more of a caterer. I genuinely enjoy  the process of preparing a mountain of food for a crowd of friends. But once a week, on Mondays, I am faced with making dinner just for one.

Half the family is at Film Society every Monday and the remaining member scorns our neurotypical human food. So I can please myself. There are several thing to consider here.

One is that I don't want to be making a whole lot of mess for myself to clean up. Not that I don't clean up after myself, but it feels a bit stupid making work for myself in the circumstances.

Another is that it's a chance to eat things the rest of the family don't like. My darling is not a great fan of steak, and responds glumly to the sight of any meat with even a hint of blood about it.  And no one else in the household likes fresh salmon (I know, right?). Either, with a little side of potatoes and greens, is a delight.

But there are also times (quite a few of them lately) when you want to spend as little as possible in the way of effort or money. I freeze single-serve leftovers of curry and serve them over some microwaved rice from a sachet. That's a perfectly fine dinner, as is a homemade tomato sauce fetched out of the freezer and served on some pasta.

Some of the best dinners-for-me are the result of haunting the aisles of Farro Fresh, looking for near-dated specials. I got some venison shortloin there a few weeks. It's normally as much as $90 a kilo, but I found a generous piece for $12 and it was incredible.

Tonight, I shall be dining on duck cassoulet. No, I'm not making it. I bought it in a single-serve 350g jar from Farro, marked down from $14 to $7.99 as an introductory special for the new line Labeyrie from France. Officially, it's Cassoulet au Canard du Sud-Oest. 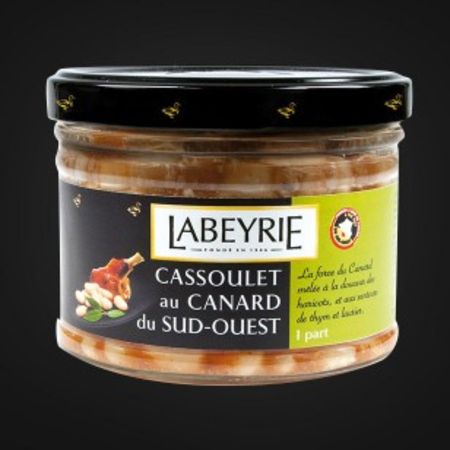 I will tip it into a nice little Temuka dish I got for a couple of dollars at Avondale Markets, put a breadcrumb crust on the top and heat it in a hot oven while I cook some green beans. I will fancy myself to be quite flash when I eat it, and then I will watch Native Affairs on the television.

But of course, I only do this once a week. Things might be different if it was this way every night, like it was for poor Don Brash. I don't think I could bear eating the same thing every night. Would I actually cook all the time? Or would the takeaway seem too alluring? I dunno. What do you guys do?