I look out the window of the Hägglund – a vehicle resembling a little train on bulldozer tracks – and begin to cry. Towering above me, out the window, is a turquoise cliff some fifty metres high. It’s the Barne Glacier. Finally it had sunk in – I’m in Antarctica. 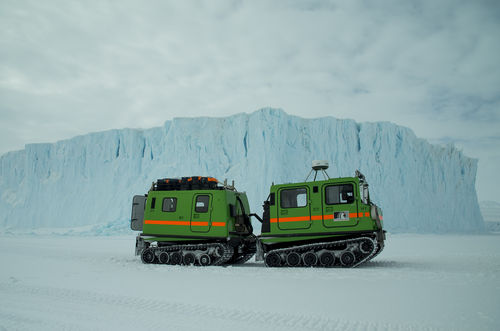 There had of course been a few clues before this. The months of planning. The trip to Christchurch; being issued with a multitude of jackets. Not to mention the flight in a US C-17, a great, grey, aircraft, five hours south inside its pregnant belly, before emerging blinking into the bright white glare of the expansive sea ice.

I’m not really one for bucket lists. But of all the places in the world, the only one I’ve had a long-held longing to experience is Antarctica. After years of attempts, finally this year I came up with a hare-brained scheme just crazy enough to work. I would take world-famous Havelock North YouTube star Jamie Curry (of Jamie’s World) to the Ice. We would frolic with penguins, fight with balls of snow, and learn about the work of New Zealand scientists as it relates to climate change. See how I snuck that last one in there? That was the plan anyway, to raise awareness among Jamie’s millions of followers, who as a group (predominately young women aged 13+) aren’t well reached by traditional media. 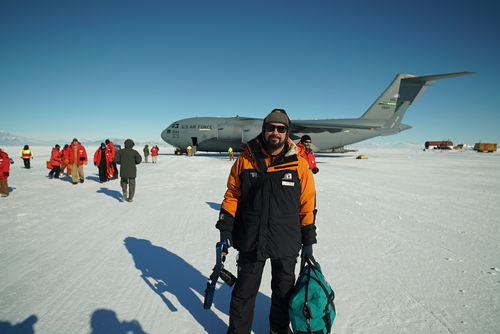 Before we leave there are forms to be filled, tests to be taken, and a rigorous medical including polio vaccinations and a chest x-ray to ensure we’re not riddled with Consumption. Because apparently in 2016 we still fear the same illnesses Scott and Shackleton did a hundred years ago.

At the Antarctica New Zealand base in Christchurch, we meet Woody, an avuncular chap who smiles quietly at our excitement, issuing our gear like he has for thousands before us. Like a pastry commercial, we try layer upon layer, are given more pairs of gloves than I’ve lost in my entire life, and are told we’ll figure out a combination that worked for us. Dressing for -30C on a Spring day in Canterbury it seems hard to imagine we’ll ever need that much clothing at one time. All things going according to plan, by 2pm the following day we’ll find out.

2pm the next day, I’m staring at a pen of baby alpaca while Jamie politely agrees to requests for selfies with young girls. When you’re expecting Antarctica, the Canterbury A&P show is a surreal experience. Our flight is delayed due to bad visibility at the Ice. It’s the morning after the Presidential elections, and with John Kerry on our flight, I wonder if the real reason is an inconsolable Secretary of State refusing to come out of his hotel bathroom.

Twelve hours later, in the middle of the night, we are red-eyed ourselves, as we head to the airport for our pre-flight briefing and a 6am departure. On our plane is the Secretary and his entourage, as well as a couple of dozen US scientists and support staff. The C-17 is a utilitarian aircraft – we sit sideways down each side of the plane, pallets of cargo strapped in down the middle. There’s plenty of leg-room, but only half a dozen portholes in the cabin. After a few hours in the air we begin flying over the broken sea ice, and queue for a peek out the rear porthole, marveling at the fractured ocean below.

With no windows, the landing approach takes forever. We know at any time the pilot could decide it’s too hard, and return to Christchurch. He’s landing a 128 tonne plane on 2 metres of frozen water for heaven’s sake, turning back seems like the only sane thing to do. We sit there, measuring how blocked our ears are, listening for clues, until eventually we touch down. Wrapped in our warmest of jackets and thickest of boots and gloves we shuffle out, into Antarctica.

Despite being covered in and surrounded by frozen water, Antarctica is the driest place on the planet. Moisture doesn’t exist that far below zero – it freezes. This makes the cold somewhat surreal, like stepping into a meat freezer, and it is hard to register how significantly cold it is. Until you experience the wind (Antarctica is also the windiest place on the planet), then it’s hard to register anything but. All you want to do is cover every single square milimetre of your exposed skin, with gloves, with hats, with masks, with necks warmers and ear warmers, to get rid of that bitter chill. 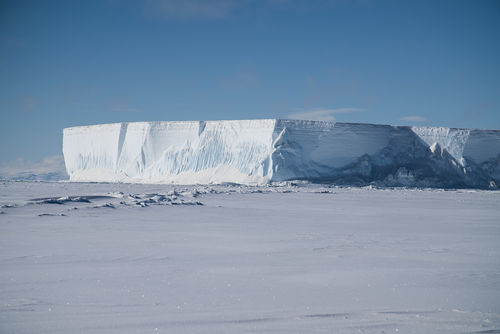 Scott Base is a series of interconnected buildings, all painted a jaunty light green (Chelsea Cucumber, if you are looking for a test pot). By November, the snow has gone from much of the surrounding earth, ice and dirt combine, vehicles are coming and going. Jamie has only seen snow once in her life before – roadside, mixed with dirt – so this is all familiar.

Inside, and I’m quickly acquainted with the one thing that will taunt me throughout my stay in Antarctica – static electricity. Some combination of the extreme dryness, woolen thermals, and a building that apparently isn’t well earthed (it’s raised above ground) provides a decent kick – enough to short telephone lines and damage computers. To mitigate this, Scott Base residents are constantly hitting metal joinery and pillars as they walk down the halls. The harder you whack, the less you notice the shock. I seem to be more prone than some, and I feel like I’m in some perverse psychological experiment.

Antarctic Field Training is an important part of the trip. Antarctica is still fundamentally the same harsh place that killed those intrepid early explorers, and has claimed the lives of dozens of scientists since, the most recent in October, when renowned US climate scientist Gordon Hamilton drove a snowmobile into a crevasse. But going through the hours of briefings and theory, I feel like a kid in a classroom gazing out the window on a hot Summer’s day. Outside it’s Antarctica, and I’m looking at a whiteboard.

Soon it’s time for our first decent look around. The pressure ridges out front of Scott Base are where the sea ice has pushed up against the land, buckling like giant frozen waves splintering on the shore. Ice like this absorbs the red part of the light spectrum, meaning these alien-like structures have a beautiful blue hue. 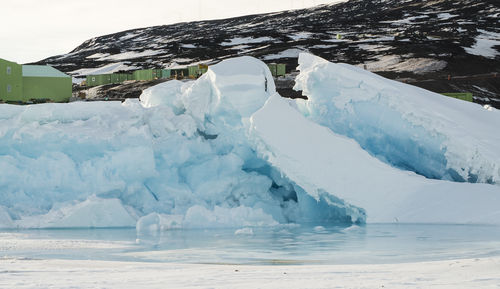 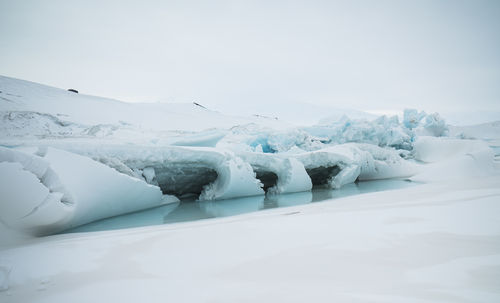 The ridges change daily; one day’s safe flagged path can be hazardous the next, and our marked entrance point now resembles a turquoise slushy, with a thick layer of white Christmas cake icing curled over it. As far as inconveniences go, this one is a picturesque stunner. We cross the ridges by another path, onto the sea ice, where dotted around are calving seals and their young. It’s my first encounter with Antarctic wildlife, and the Weddell seals look like giant slugs. They move like giant slugs. But their babies are postcard material. 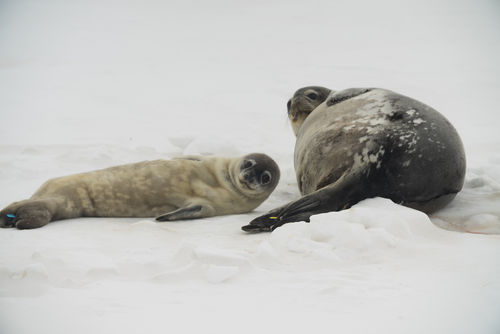 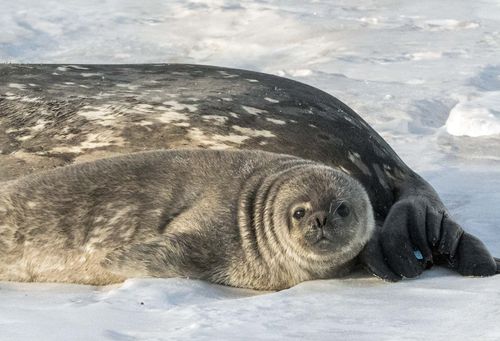 As day turns into what-would-be-night, if only the sun ever set, I’m strangely energised. I’ve always been a night owl, now the sun is giving me permission to indulge that inclination. The scientists I speak to say over-working can be a real issue – with only a limited time on the ice and the sun saying ‘keep going’, many do just that until overcome by exhaustion. Me, I’m just catching up on late night tales in the dining hall, as a group gathers around the only source of food outside of meal times – the toaster.

It’s easy to lose track of days, especially with no night, but Sunday is a day of rest for staff at the base. Day trips provide an opportunity for scientists and general staff alike to see areas they might otherwise not. It’s the classic kiwi Sunday drive, and today our tiki tour takes us to Cape Evans and Cape Royds, the sites of huts belonging to the great explorers Scott and Shackleton and an Adelie penguin colony. 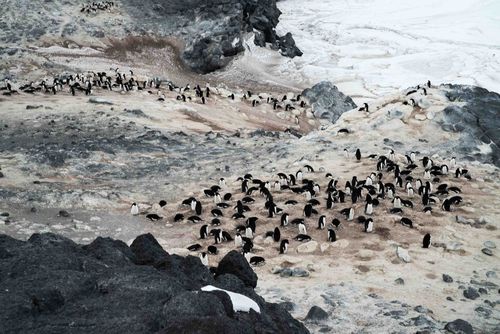 The huts are incredible. Preserved, both by the cold dry climate as well as in a heritage sense, they’re a time capsule. Rations, equipment, clothing, newspapers, scientific instruments, all on display. Staged, certainly, but only with items found in the huts, and the smell still heaving from the strips of seal blubber piled in the corner tell you this is no artificial museum exhibit. In the pitch black storage room of Scott’s hut I find a stack of Emperor penguin carcasses, ready for dissection, and a dog skeleton, collar still around its neck. Eerie doesn’t begin to describe it, even with full sunlight outside, only a dull glow comes through the few small windows.

I’d been told there’d probably be no chance to see penguins this trip, which was a bit like being told there’s no Christmas this December. From my vantage point on top of a hill at Cape Royds, I’m looking down at 20,000 reasons why you shouldn’t believe everything you’re told, especially when it comes to seeing penguins. Closing my eyes, I can still tell there are 20,000 penguins nearby – an Adelie colony gives century-old seal blubber a good run in the whiffy stakes. There are no babies yet, but judging by some of the activity going on down below, they won’t be far off. Yes, I went to Antarctica and watched penguins doing it. If it’s okay for nature documentaries, then it’s okay for the rest of us.

DAMIAN IN ANTARCTICA from Damian Christie on Vimeo.

For lunch our guide decides to take us ‘somewhere scenic’. This seems like an odd thing to say in a place like Antarctica, a place littered with icebergs several kilometres long, glistening, trapped in the sea ice until late Summer. With Mt Erebus puffing smoke on one side, and islands dotted across the McMurdo Sound on the other. Where everywhere you look you feel like setting your phone to panorama mode. Perhaps he meant “somewhere that doesn’t smell like old seal blubber”.

We pile out of the Hägglund, and there it is, the sight that had brought tears to my eyes earlier that day – the Barne Glacier. I wander away from the rest of the group, in need of some alone time. Perhaps with the same thing in mind, a lone Adelie toboggans past on its belly. It stops, stands up and looks at me. I take a bite of my ham sandwich and look back. It poops on the snow and glides off. David Attenborough, eat your heart out. 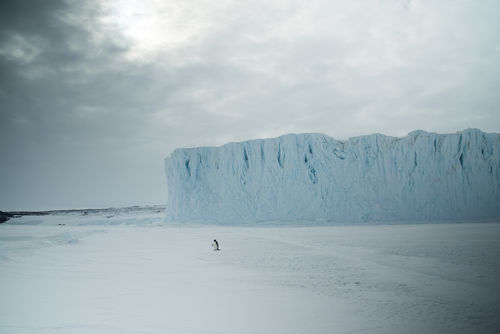 Jamie and I were part of Antarctica New Zealand's Community Engagement Programme, so huge thanks to them!

This piece was originally published in the Weekend Herald, mucho gracias for allowing republication here.

Webseries production was made possible with a grant from the Deep South National Science Challenge, most appreciated.