When I started SciFilms about this time last year, it wasn't really a change of direction so much as a narrowing of focus. I've always loved doing science and technology stories, and I really wanted to put my flag in the ground and say "this is what I want to do".

In the past few months I've been to Antarctica, diving in marine reserves, flying drones in regional parks and just last week, captured (with shooter Bevan Crothers) some beautiful footage of bottlenose dolphins which has been viewed hundreds of thousands of times around the world via viral sites like Mashable and BoingBoing. Here's that footage in case you missed it:

But as Summer draws to a close, one of the things I'm so glad we got done this year was a bat hunt with Ben the Batman.  Ben and I had met up when I first launched SciFilms and I knew I wanted to do something about his work.

The lovely folk at the Weekend Herald thought my profile suggestion was a good idea, and the following is republished with permission. The icing on the cake as a proud Dad was the fact NZH chose one of the photos taken by my 5 year old Harry (you can see him clicking away in the Batman hoodie) as the main illustration for the article. And yes, I paid him for it.  Have a watch and a read:

Batman has a name, and that name is Ben.

By day, and regularly at night too, this Batman goes by the full name Ben Paris, and he works at Auckland Council as a senior biodiversity advisor. But on social media, his regular radio appearances, and when he addresses our group of two dozen children and parents gathered at the Waitakere Ranges Regional Park on a Summer’s evening, he’s Ben the Batman.

In case you weren’t aware, New Zealand has two species of native bat, the long-tailed bat, and the short-tailed bat. They’re our only native mammal. There was a third species too, the greater short-tailed bat, but it’s believed these became extinct around 1967 thanks to an invasion of ship rats on the two Southern islands they called home. The remaining lesser short-tailed bat is endangered too, in part due to its habit of crawling on the ground for food, rather than flying. 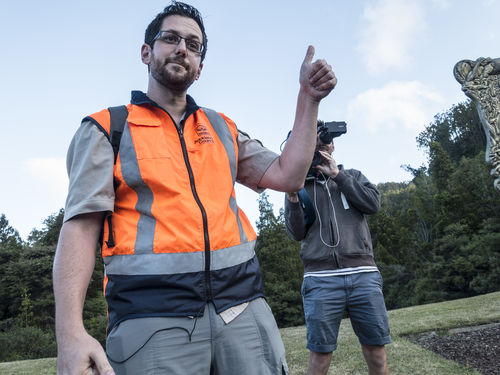 On this particular Wednesday night, we’re looking for the less endangered (but still at-risk) long-tailed bat. It’s half an hour before sunset, and there are no bats, not yet. Batman Ben has advised us to bring insect repellant, and he’s not joking. The sky is thick with mosquitos, searching out the one overlooked, unsprayed patch of skin. Tonight the tables will be turned on these blood-sucking parasites, as a cloud of bats shall emerge from the depths of Hell (or at least a nearby kauri) and descend to feed. Weighing between 8 and 12 grams, people have little to fear from the long-tailed bat, but each critter can devour a thousand mosquitoes in a night. And my already itching elbow says they’re not going to have any problem finding their quota this evening.

Ben the Batman’s not having any problems filling up his bat tours either. Running twice a week over Summer, they sold out quicker than an Adele concert, in no small part due to the guide’s own enthusiasm.

“The bat tours book out within about two weeks, which is really amazing, basically they open around the 1st of December and they’re gone, it’s really, really popular and we really love that people in Auckland really love their bats."

In truth, most people in Auckland have probably never thought about bats, let alone know that the edge of town is bat country. That doesn’t mean they’re not keen once they find out – all my invitations to join the special bat tour put on for us are promptly snapped up, the adults just as excited as the children at the prospect of spotting these often-maligned creatures.

For Paris, it wasn’t bats, but native birds that got him started in conservation. “I guess I’m a bird nerd,” he explains, recalling how a school camping trip was his inspiration. “We went out to Pureora Forest down near Taupo, and they got us up at five in the morning. We were like ‘what the hell, what’s going on’, sitting in the forest in the cold, but then hearing the kokako sing, the dawn chorus was just amazing. And that’s when I realised, this is what I want to do.”

After graduating from Waikato University with a science degree, one of Paris’ first tasks was bringing tui back to suburban Hamilton, where rats attacking nests had wiped them out across the city.

“So we did some really intensive rat predation in a halo around Hamilton, and within two years tui started coming back. First of all we’d have one sighting of a tui, then ten sightings… now there’s trees full of tui, and it’s really exciting when I go back to Hamilton that my legacy is left behind.”

Hamilton was also where Paris was introduced to New Zealand’s native bats, and together with colleagues began bat tours in 2008. At the same time, a group of bats had been discovered in the Waitakere ranges by an Australian ranger, who being used to bats back home, didn’t think much of his find until he mentioned it to his workmates. When Paris took a job at Auckland Council he saw the unusual species as a way to get communities interested in conservation, and the Batman was born.

“I used the bats as a flagship. I created my NZ Batman profiles on Facebook and Twitter and Instagram to try and get the word out there. When I first moved to Auckland I was talking to a few local schools in Henderson, then it grew to ladies’ Probus Clubs, and it’s been snowballing from there. They might not remember my name, but they know I’m the Batman!”

At the Waitakere Ranges our excitable group has walked a hundred metres into the bush, through a foot-spraying station to combat kauri dieback, and come to a halt near a thousand year old kauri tree. Paris directs the group to a dead branch with a small hole in it – this is where bats live. Necks strain upwards, eyes squint, torches search out the crevices, cameras click, but there’s no sign of them yet.

The Batman gives the group a rundown of everything you might want to know about the long-tailed bat: Their body is the size of an adult thumb, with wings expanded they’re the size of your hand. They have just one baby – or pup – each  year. During breeding season, the male and female of the species move into segregated maternity and bachelor roosts, only visiting for “fun times”, as Paris explains in a family-friendly manner.

What about being Auckland’s answer to Batman? Does that help with the “fun times”?

“It doesn’t work as well as it should,” Paris laughs. He says it does result in a lot of bat-themed gifts from friends, most recently a Batman shower curtain. But he admits his partner doesn’t share in this particular passion, and she’s not alone.

“There seems to be this weird fear about the bats. They’re just very different, they’re very unusual. But when people see them, like we will tonight, they get very excited about it. I think it’s the Batman folklore and things like that.”

While he’s fine with bats, there are some critters the Batman isn’t quite so comfortable around. He admits giant centipedes can freak him out when he stumbles upon one unexpectedly. “Sometimes the cave wetas can give you a fright too when they jump out at you. But there’s nothing in New Zealand that’s going to hurt you too much.”

So what is it about bats that see him invest so much time, including his evenings, raising awareness about these tiny beasties?

“I get excited when other people get excite about it,” Paris says, and it’s not only bats. “I get a real buzz off people learning and discovering new things.

Kids just buzzing because they’ve seen a spider, or a little native crayfish in the stream, that’s really cool.”

The excitement is certainly contagious. There’s a mad scramble by the children when Paris asks the group “so who wants a bat detector?” The little devices, about the size of a walkie-talkie, are tuned into the echo-locator frequency the bats use to ‘see’ in the dark. In the case of the long-tailed bat, that’s around 40hz. Wave the detector around the sky and if there’s a bat in range, you’ll hear a fast series of clicks as it darts about. (The detectors can be borrowed from the Council if you suspect there might be bats in your backyard).

However, as sunset approaches and then passes, there’s a sense tonight might be a bat-less affair. For the adults it seems almost expected, like a fishing trip with no fish. The children’s expectations are still set at 100% chance of bats. The non-appearance isn’t for a lack of mosquitoes, that’s for sure. And there are a few false alarms – the flit of a fantail at dusk seems remarkably bat-like.

It’s hard to remember exactly what happens next. The bat detectors all clicking madly, or some sharp eye spotting a single bat dancing above the tree line. Our group is abuzz. Thirty seconds of circling, then it’s off. Soon comes a second, then shortly after a sighting of another (or possibly one of the first two) further along the ridgeline.

For all of the guests tonight, it’s our first confirmed bat sighting. Satisfied customers, happy Batman. But what happens to the bat tour when the bats are a no-show? How do you explain that to a crowd of over-tired children?

“Oh it gets really awkward,” Paris shrugs. “We have to try and get them enthusiastic about glow worms instead!”

It’s unlikely bats will be commonplace in the suburbs anytime soon, but after leaving his mark on Hamilton with tui, Paris has plans for a legacy in Auckland too. He’s working with residents to develop a pest-free ‘wildlife corridor’ linking the Hauraki Gulf islands and the Waitakere ranges, encouraging birds to move between the two, and ideally settle in between, across the North Shore. All going well, in years to come, when the suburban backyards of Auckland are full of our native parakeet the kākāriki, the kea’s cousin the kaka, and kōkako, the city’s residents should look to the sky at night and give thanks to the Batman.