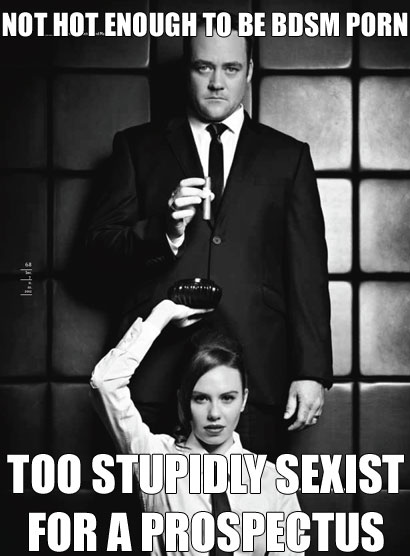 Okay, look. I don't own a tie. I'm not saying I won't wear one, but you'll have to provide it, and I'd like it to be a bit less fugly than that one, okay? The whole white blouse and black pencil skirt thing I can do: every skinny brunette needs that trick in their armoury, right?

Yeah, I like men in suits. I love cigars. And yes, holding someone's ashtray for them is the sort of thing I might do. It'd be negotiated, of course, as part of a relationship to which affection and mutual respect is integral. In that context, yes I would hold your ashtray, or pour your drinks, or go and get you some fucking ribs. I am that kind of woman.

But here's my problem. If I were to hold your ashtray, I wouldn't be doing it in such a blatantly stupid position. I'd either be facing you or, preferably, kneeling to one side of you. That way you, as an obviously dominant male, would be capable of, you know, taking a step. Should you want to. I wouldn't have my arm raised like that in an obviously unsustainable way, because I'm going to be there a while. But then if I were constructing the scenario, also your cigar would be lit, and you would know how to hold it, and indeed have some grasp of what the object might be. And you wouldn't look quite so... gormless.

No, here's my problem. I really, really don't like it when vanilla advertising co-opts imagery from BDSM. I don't know why this is becoming such a thing. All you can get that way is surface. You scrape that off and take it and you don't understand what's underneath. Yes, 'human ashtray' is a thing, and I don't recommend you google it. (Though if you do, you might notice something about the gender balance of subs.) That kind of service is a Dominance/susmission thing, and you so clearly don't understand it. You don't get why your image is so much more disturbing than, say, this one (NSFW, mild nudity). So many little things, like facial expression and tiny pieces of body language that show an understanding of a D/s dynamic.

Context is everything. You've quite deliberately taken that imagery out of context, and planted it square in your hotbed of misogynistic marketing bollocks. I mean, it's not that you're really sexist and homophobic, right Moa? You just think it sells. That's why 'one picture' is problematic: because you think misogyny chimes with your target audience. You think it's what they want. You took something I love and made it cheap and tacky and insulting, and you've got no fucking clue what you've done.

You're also hoping the humourless outrage will get you sympathy and lots of tasty cheap publicity. Thing is, the outrage has been pretty humoured. Just the Twitter hashtag has shown more "sharp wit" than, obviously, you can buy. And let me tell you, as a submissive woman who thinks Cassells' Alchemist is up there with the Civic and John Barrowman in terms of Perfect Things? I don't think your Modern Manhood is quite Premium enough to cope with me. You can't have my money, Moa, but you can have my slightly condescending pity.