The Government recently released its plan to tackle the complex issue of childhood obesity – and a barrage of interviews and opinion pieces from medical and health professionals soon pointed to a consensus that the Government’s plan is overwhelmingly lacklustre (also “timid,” “watery” and “really very disappointing”).

Instead of recounting the ways in which the Government’s plan fails to live up to previous recommendations from the World Health Organisation or the advice of public health researchers, I want to explore whether or not feasible approaches can still be implemented that at least lessen the gap between what ought to be and what is.

First, let’s take a look at our starting point. The Ministry of Health conveniently summarised the 22 initiatives of the plan in a pastel pyramid, its tiers labelled with promising headings—targeted initiatives at the top, increased support in the middle and finally broad population approaches forming a sturdy base. At first, the catchy colours, the initiatives numbering into the double digits, and the key signalling that health sector and food industry actions were in the mix showed promise. However, all that glitters is not gold. 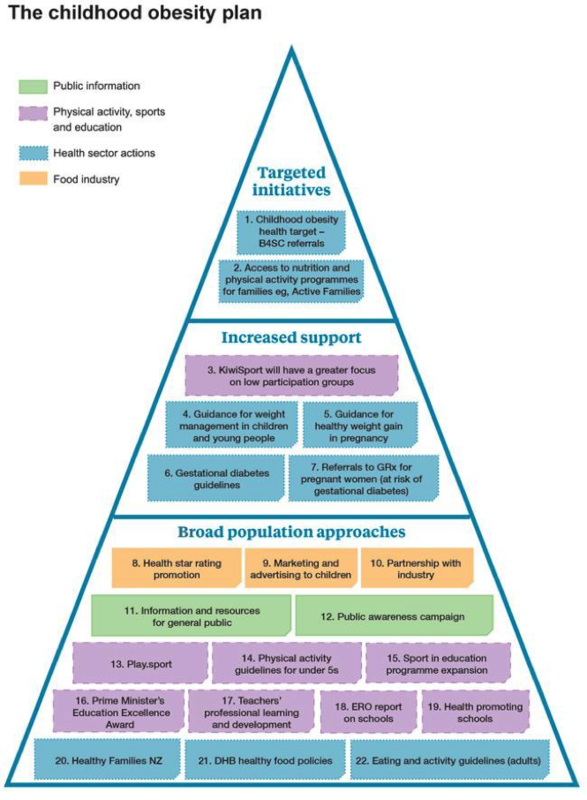 It might be useful to slightly amend the headings to better reflect the content of the plan. Targeted initiatives can remain as is. We’ve seen that health targets can be an effective way to drive action—take for example, the immunisation target.

But let’s just keep in mind that the targets in the childhood obesity plan focus on screening (identifying obese children before they enter school) and pointing families with obese children to support programmes, not prevention or changing the underlying drivers of obesity. As the Children’s Commissioner explained, screening checks are questionable if the programmes that families are directed to are ineffective. And as experts recommended to the Ministry of Health, it would be better to have a more aggressive target.

‘Increased support’ can be renamed the ‘information and education’ tier of the plan. What could be said about information- and education-based approaches that hasn’t been said before? Clearly, no one is arguing to rid the plan of such approaches, but here we have a classic case of "necessary but not sufficient". With more than a quarter of the approaches focusing on guidance, information, public awareness or guidelines, it’s safe to say that the "provision of information" aspect of the plan is sufficiently covered (if, of course, the initiatives are implemented as outlined).

The third tier could be renamed ‘existing approaches’ instead of ‘broad population approaches.’ Despite a disappointing name, this group of approaches holds the most promise. Among these initiatives are Healthy Families NZ, the (re)announcement of DHB healthy food policies and the continuation of Health Promoting Schools.

Don’t get me wrong, these initiatives are heading in the right direction—focusing on changing environmental factors and underlying causes of obesity—yet they are not huge surprises. While only representing a small proportion of the pyramid, it would be encouraging if the Government chooses to invest in the success of these initiatives.

Also under ‘existing approaches’ are three orangey-yellow boxes in the pyramid that assert the continuation of industry self-regulation with respect to food labelling and marketing, and also reaffirm that yes, the Government will maintain partnerships with industry. Again, these initiatives are nothing new. The Government commitment to front of pack food labelling—the voluntary Health Star Rating system—was announced last year, and the advertising code for junk food marketing to kids has been around since the late 1980s.

If the Government wanted to depart from the overall lacklustre theme of the report, how could these three initiatives be somewhat ‘bedazzled’ to show more promise of actually reducing childhood obesity? No need to call for blanket regulation, complete bans or taxes. We already know that these options were taken off the table by the Health Minister, although promoted by many public health experts.

There are ways to encourage action while using little or no Government regulation. Here’s a simple suggestion that could still be implemented for the review of food marketing to kids, which is currently an industry-led approach under the Advertising Standards Authority.

It’s clear that the Government established a technical advisory group of experts to guide the Minister’s recommendations on childhood obesity. It’s also clear that the Government sees it as important to consult a wide range of stakeholders in policy development, as demonstrated by the mere existence of this advisory group. If the time and money is already being spent to consult such experts, why not give such groups greater capacity and responsibility to shape the final policy decisions?

For example, why not involve the existing advisory group of experts in the review of the Children’s Code for Advertising Food? That way, no new regulation is required, and it’s up to industry groups, advertising authorities and health professionals to work on a compromise solution that addresses both public health needs and industry concerns.

As another example, the Government has already committed to utilising the Front of Pack Labelling Advisory Group to “play a critical role” in the implementation of the Health Star Rating system. This Advisory Group consists of industry representatives, government officials, representatives from NGOs and public health researchers.

Why not include in that ‘critical role’ the tasks of developing criteria for the detailed reporting of industry commitment to the Health Star Rating scheme and establishing a transparent, online website where the commitments from different companies could be displayed? Here, we are making it easier for the public to see the details of industry uptake, increasing industry accountability and, importantly, not even whispering of mandatory regulation.

Obesity reduction plans do not need to be all or nothing—all mandatory or all voluntary, all industry or no industry, and so on. It’s clear that calls for mandatory regulation to restrict junk food advertising, to mandate healthier food in schools or to ban the sale of sugary drinks are all unwelcome to the Health Minister.

However, the burden of diet-related chronic disease will also be a very unwelcome reality if serious action is not taken. Solutions like those suggested above show that it is possible to stick within the bounds clearly laid out in the Government’s plan and preserve the partnerships with industry valued by the Government, yet also foster deeper partnerships with trained experts in public health.

Amanda Wood is a PhD candidate at the University of Auckland.