In restoring our earthquake-damaged house, I’ve come across a few interesting old items.

In the attic we discovered a group photo of the Avonside Tennis Team of 1929: ‘Matches Played, 8; Matches Won, 8’ (a successful year for them). And demolition of our chimneys unearthed an unusual brick with animal paw-prints in the clay—identified by me as ‘small dog’ and by Ian Dalziel as ‘gigantic rat’.

Then there’s this letter: 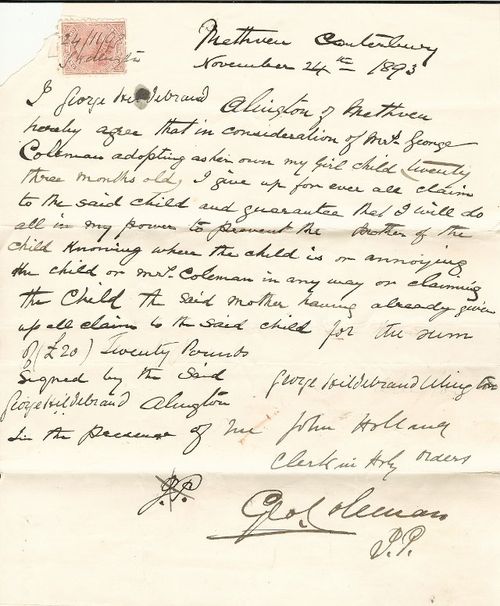 Above: Letter of adoption of child, 1893 (click image to enlarge).

I, George Hildebrand Alington of Methven, hereby agree that in consideration of Mrs George Coleman adopting as her own my girl child twenty-three months old, I give up forever all claim to the said child and guarantee that I will do all in my power to prevent the mother of the child knowing where the child is or annoying the child or Mrs Coleman in any way or claiming the child—the said mother having given up all claim to the said child for the sum of (£20) Twenty Pounds.

Signed by the said George Hildebrand Alington [his signature]

In the presence of John Holland, Clerk in Holy Orders

There are also two receipts: 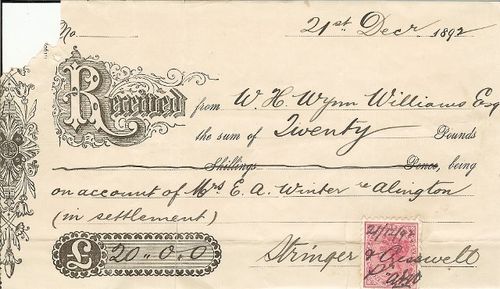 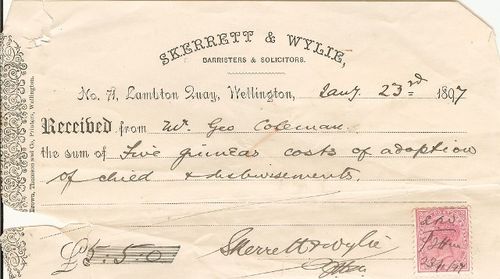 I admit to being slightly shocked when I discovered this letter. As a father myself, I can’t imagine giving away my child—particularly at 23 months old when she would be scampering around and quite capable of holding a conversation. And then there’s the slightly unpleasant promise to hide the location of the child from her mother. Not to mention the twenty pound payment to the child’s mother, with a receipt dated 11 months prior to the letter of adoption.

The inclusion of another solicitors’ receipt dated five years later shows that some sort of official legal adoption has now taken place. Does this mean that my discovery of these documents is via the family that adopted the girl? Or was the receipt forwarded to the biological father, who kept it carefully in his records?

Alington is a distinctive surname. The adoption letter was penned over 120 years ago; so I didn’t think anyone would mind me investigating the matter. Here’s what I discovered about the child’s father:

George Hildebrand Alington was married in the same year that he adopted out his daughter. His new wife, Winifred, turned 20 the year she was married, whereas George was aged around 43. Both were from rather posh backgrounds; the National Library holds archives of the family but makes no mention of George fathering a daughter prior to his marriage.

The proximity of the adoption and George’s marriage raises some interesting possibilities:

There is also the matter of the child’s mother and the payment of the twenty pounds. This was a large sum of money in 1892—a typical carpenter in Canterbury only earned £23 per year. A payment this large possibly has a whiff of hush money about it.

It’s also interesting that the payment receipt is made out to W.H. Wynn Williams (a very prominent Cantabrian who once held office as Provincial Solicitor), but signed by Stringer & Cresswell, an unrelated firm of Christchurch solicitors. Presumably W.H. Wynn Williams was acting on behalf of George Hildebrand Alington, and Stringer & Cresswell on behalf of the child’s mother. But the plot thickens when we see that Williams has paid “on account of Mrs E.A. Winter RE: Alington”.

Could Mrs E.A. Winter be the mother of the adopted child? Although given the ‘Mrs’ then perhaps it’s more likely she would be the grandmother. On the other hand, an article in an 1887 Christchurch Star makes mention of a Reverend E.A. Winter speaking at Saint Luke’s Church. It’s possible that he had a wife who dealt with these kinds of matters. Was Mrs Winter connected to an orphanage where the child may have been placed out of the way of her father?

Taking the child’s age from the adoption letter we can calculate her date of birth: between 25th November and 24th December, 1891. According to the Births, Deaths, and Marriages database there were no children born with the surname ‘Winter’ (or ‘Alington’) in that period. So perhaps the Mrs E.A. Winter named on the receipt was unrelated to the adopted child.

It should, of course, be an easy matter to find the child’s mother’s name (and the child’s birth name) by inspecting all the birth records within the date range. Unfortunately, however, the Births, Deaths, and Marriages database doesn’t permit unnamed or wildcard searches.

Investigations into the child’s adopted family have been less successful. There were several George Colemans in Canterbury during the mid-1890s: a Justice of the Peace in Christchurch, a farmer in Ashburton, a military captain in Ashburton, a prominent member of a Canterbury Tramway Board (these last three may even be the same person), but no mention of a daughter. There was even a George Coleman in Wellington who was sentenced to two years hard labour in 1898—could this be connected to the child’s official adoption in Wellington in 1897? I hope not.

And so the trail goes cold.

After finding the adoption letter (and the information about George Hildebrand Alington), I had visions of playing a minor role in a family reunion: introducing the Alingtons to their previously unknown cousins. It’s disappointing that I haven’t been able to help that along very much.

From the limited evidence it’s difficult to know what to think of George Hildebrand Alington. Perhaps he loved the child’s mother, but her parents forbade marriage, and George did the best he could—giving the child’s mother his life savings and making sure the baby was safely adopted. The promise to keep the mother away from the child being inserted in the letter only at the adoptive mother’s insistence.

On the other hand, perhaps he was a moustache-twirling cad who contrived to remove the child from the mother, paid off her relatives, and then used his connections to dispose of his illegitimate daughter on the eve of marriage to a wealthy young heiress.

I mentioned that the Alington family were quite posh. A mildly interesting discovery was that the girl in the adoption letter is actually a verifiable relative of the current royal baby. Oh, if only the mighty financial resources of the Womans’ Weekly could be directed to solve this mystery—and to pay wheelbarrow loads of money to Births, Deaths, and Marriages for the certificates that could reunite the Alingtons with their long-lost (nearly) royal relations.