I don't care to be railroaded. The Auckland landscape is littered with the debris of last-minute plans. Nonetheless, Graeme Osborne, who is the chief executive of Tourism Auckland, has given me pause for thought with some rather dismal pictures. Let us begin with the slide show, and his commentary. 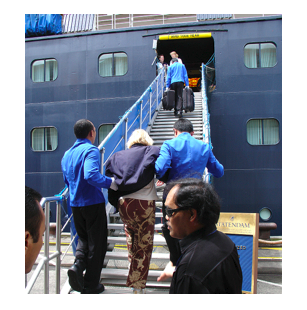 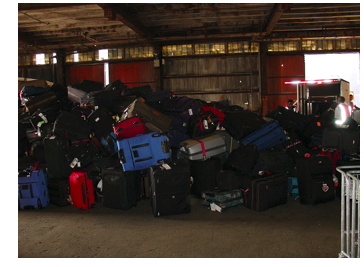 This, Graeme says, is how we handle their baggage. 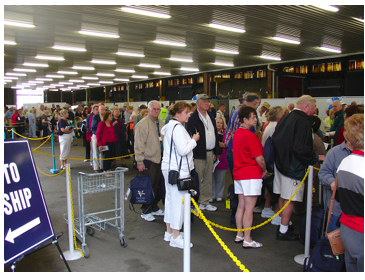 And this is how we process them. 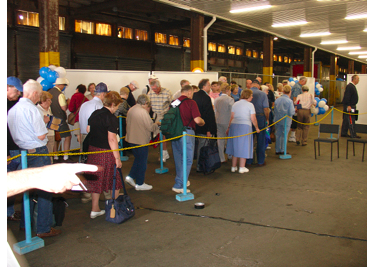 So, what do you think of New Zealand so far?

He has an argument to make. I remain leery of spoiling a grand opportunity through haste, but I'm happy to give him a platform. I now turn the microphone over to Graeme Osborne. Please feel free to debate in the usual manner.


At least four consultants’ reports in the last 12 months. A public competition to procure a suitable design. In-depth analysis for the last 12 years. And still we fumble for the right decision on what to do with Queens Wharf.

Let’s get on with it. We need a decent cruise ship facility and public open space on Queens Wharf. That’s why the Auckland Regional Council and the Government agreed to buy it from Ports of Auckland.

The work has been done. Endless reports support the view that the $97 million option – including wharf repairs and a $49.2 million cruise ship terminal in time for Rugby World Cup 2011 – as the best for Queens Wharf. Right now we have a need to deliver bold decisions and generate momentum, and time is against us.

It’s important to cater for the influx of visitors that the Rugby World Cup will bring. At least 60,000 international visitors are expected here for the event, with Auckland likely to host up to 40,000 of these at any one time. Clearly we don’t have the hotel rooms available for this kind of influx, meaning that motor homes and cruise ships will be required to boost accommodation supply.

We expect that at least two cruise ships will be needed to accommodate fans during the Semi-Finals and Finals in Auckland. How compelling a proposition will it be to have them tied up alongside a couple of old sheds that are better suited as a

The eyes of the world will be on Auckland like never before and we have the opportunity to create a stylish, welcoming, best possible shop window.

However, Rugby World Cup 2011 is only part of the picture. The true legacy benefit of investment in Queens Wharf will be delivered by the cruise ship sector.

Right now we offer a substandard service to cruise ship passengers, which are growing in number. The treatment we give them, especially those leaving the ship in Auckland, is embarrassing.

We are competing with Sydney as a hub port where cruise ships offload and pick up new passengers. The inflow and outflow of cruise passengers provides Auckland with a great opportunity to be a host city and has downstream impact on cruise ship visitors scheduled throughout New Zealand.

We need to make a bigger priority of providing cruise ships and their passengers with a profound sense of arrival and a facility that gives them an integrated transit process to include baggage handling, check-in and forward transport.
Next season we are expecting around 133,000 passengers on 70 voyages. What will they find when they get here?

Tourism is big business for New Zealand. It comprises 10 percent of the New Zealand economy, 10 percent of employment nationally and is our top earner of foreign exchange. Tourism earns $1.6 billion of GST per annum. Yet we only capture 0.5 percent of global visitor arrivals.

Auckland is a key driver of New Zealand’s visitor economy. Of all New Zealand visitor

Tourism is a highly competitive business internationally and we need to be on top of our game with our visitor infrastructure, delivering a top class visitor experience, and in communicating our attractions to the world.

A decision to proceed with the $97m Option 4 for Queens Wharf is in Auckland and the nation’s best interest. It therefore seems appropriate and reasonable that Government should come to Auckland ready to help fund this investment in partnership with Auckland’s ratepayers. These opportunities do not come along often. Let’s seize the moment and move forward.