I had the recent experience of being requested to provide a self-image for an international  art magazine, one of those nicely laid-out publications of leading-edge contemporary art, filled with thoughtful commentary, exhibition reviews, artist profiles, and lots of full-page gallery advertisements.

I loathe requirements to provide self-images. I always have. My first facebook self-image dated from the beginning of facebook, and was only recently replaced, after complaints of misrepresentation, by another more relevant to my current appearance.  Even this second facebook image had been taken under obligation, with much wailing on my part, by a New Zealand Herald photographer to accompany a story.

In the last five years, to the best of my recall, I have only voluntarily delivered two other self-images to the internet. I’d taken one in a mirror after a 24 hour bender, in boxers and a tee, and posted it, with attendant psychology, on my facebook account. The other was a pleasant image taken by a casual photographer at a gallery opening, which I mostly enjoyed because of the other person imaged in it. Images of myself occupy next to no space on my hard drives.  I seldom facilitate their creation publically and I usually don’t perform them in private.

So after the international art magazine requested a shot to be run very small on their contributors page, I gave them an image of myself I actually liked, a selfie – of sorts. I posed it against the large fake Colin McCahon painting in the lounge room. It said a lot about me, I thought. The background was considered (imitation New Zealand art) and the pose dominated by that careful splash of the reluctant subject’s palm. It said ‘no, I’d rather you read my work than look at me.’ There was a little Hollywood, a little media-history, and if you were a palm-reader, all my life was there to see. 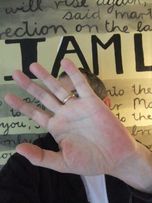 I sent it off.

I received the following email:

Thanks for the photo, but we will require you to submit another head shot (without face obscured).

We require this asap as we are heading to print very shortly.

So I surrendered and sent them my lo-rez copy of the Herald shot, really the only ‘authorised-looking’ image I have.  I could live with that image, I figured, if really required.

I also thought lots about the fascism of the obligatory self-image in contemporary life and the odd contradictions inherent in the editorial policies of cutting-edge art magazines. It also coincided with the fact that I have been puzzling a lot about selfies as a genre and a style of self-presentation lately.

The very first selfie in photographic history is Robert Cornelius’ ‘Self-Portrait’, taken in 1839. 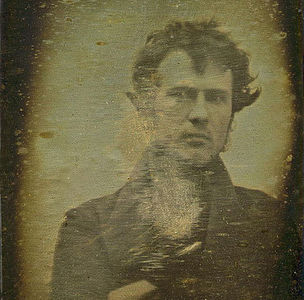 An American, Cornelius had specialised in chemistry at school and worked for his father’s silver-plating and metal-polishing business. Cornelius had been approached by a local inventor to help with a daguerreotype, a process which involved making silver light-sensitive and fixing the result. He discovered his own interest in the technique.

Cornelius’ self-portrait was taken outside the family store on Chestnut Street, Centre City, Philadelphia. He had pressed the shutter and sat in front of his camera for more than a minute. It was labelled in his own hand: ‘The first light picture ever taken, 1839’,  His slightly side-on glance, with its angled almost suspicious air, amply befits the first man to initiate a photographic genre which would come to preoccupy the contemporary world.

Even in contemporary terms, it’s a very good selfie.

It was also part of a long art tradition, since mirrors had first made a self-portrait possible. The true history of the mirror and its effects on our psyche remains to be written. It seems impossible for us to conceive the fact that for most of human history, the vast majority of people had no idea what they looked like. There’s a good portion of contemporary neuroses gone in a flash.

But the self-portrait is seldom just a record. Self-portraits are also self-presentations, with much attendant drama, from Durer’s Christ-like pose to Van Gogh’s bandaged ear

Staging the self seems to come directly after the first experiment. Staging is learned, a combination of tradition and desire. Whether self-portraiture is always aspirational is a moot point, but aspirations go in many directions. There are desires to look mad, bad or dangerous to know, just as there are professional or socially-elevating ambitions.

In 1840, a year after Cornelius posed himself before his camera, the French photographer Hippolyte Bayard photographed himself in ‘Portrait of a Drowned Man’. It was a public and trenchant illustration of his anger at not being accorded the same respect as his contemporary, the photographer, Louis-Jacques Mandé Daguerre. The tableau was a serve at an art-establishment which Bayard felt had neglected him. 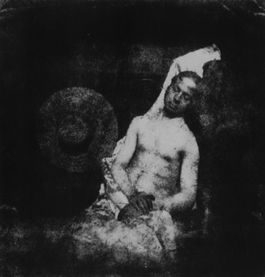 It was a selfie with a message. It was the first image of what would become a preoccupation of photographic self-portraiture – self-drama - where the depictive act is ramped up way beyond an act of record to make a point.

On a daily basis, my Internet feed inevitably contains a number of selfies, taken by people I know. Multiply this ten-fold for the ones I see of people I don’t know.

The first recorded use of the word ‘selfie’ was by photographer Jim Krause at a seminar in 2005 (“That's not to imply that it's "wrong" for your arm or hand to show up in a selfie.”), but has now become ubiquitous, and something that has shaped camera design. While cameras with short-focal lengths and instant delivery, like the Polaroid had made selfies easy, it wasn’t until the smartphone revolution in the late 1990s that the means to instantly take and share a self-image became a reality. One of the major uses of a smartphone camera with a second forward-facing lens is to facilitate selfies.

Astronauts take selfies on spacewalks. President Obama’s daughters were taking selfies at his second inauguration. Selfies are an obligatory part of a media-celebrity’s twitter tweets or facebook posts - with occasional monkey, bestie, or fellow party-guest thrown in. Instagram hosts more than 90 million images hashtagged ‘me’. There are any number of internet sites that offer tips on taking a good selfie: ‘For the most flattering photo, hold your phone slightly above eye level and away from you at a 45 degree angle.’ The Ugly Selfie is a popular meme where deliberately unattractive or distorted images are chosen to be foregrounded and even used as profile shots.

The place of selfies in facilitating sexual contact in the 21st Century also cannot be underestimated.  Dating sites are hotbeds of sexual selfies, and it has taken to extremes by gay males, still our most reliable weathercocks of sexual trends.  On images found on gay hook-up sites and apps, the iPhone has virtually become a secondary sex-characteristic, a product held high in all those selfied images: me-neck-to-thigh-with-erection-and-iPhone. Apps like Grindr mean that one can be fed the nearest truncated-torso’s location for the possibility of immediate gratification. Face-shots are something to be asked for, something that comes later, a fact interesting in itself. A whole history of face dominance gone in a flash.

The role of selfies as representation is also somewhat subordinate to their signification in various systems of exchange. To not have one is to be unable to fully participate in social media activities. Not having a selfie is just like not having an obligatory photographic portrait image (passport, ID, PR). People with selfies want to see yours. They want the happy party, the autobiographical record, the fun-with-selfie-conventions, the ugly selfie, the carpe-diem, the fashion statement, the pose… Your selfie is you. Being and recording have become one.

But my selfie was rejected by an international art-magazine…  I can’t figure out what it signifies. I’m probably vaguely proud of it.  I don’t know what that says about me or the magazine, but I’m sure it says something, just as the rise and the rise of selfies in contemporary media says something about us as a culture.

Are we all narcissists? Are selfies a demonstration of anxiety, where we need the validation of an image to hold the fort against the great dark forces outside? Are selfies just another economic or technical angle on an increasingly mediated life? Are selfies the logical consequence of the invention of mirrors? Whatever. They aren’t going to go away anytime soon. A few weeks ago I watched a four or five year old insouciantly take a selfie by the bucket fountain in Wellington’s Cuba Mall  He had all the angles down pat.