The Washington Post, Buzzfeed and others are reporting something strange and troubling today: a fake news site falsely claiming that Donald Trump and not Hillary Clinton has won the popular vote in last week's US Presidential election is the top search result in Google News.

The result of the popular vote is, I'm sure you know, immaterial to the result of the Presidential election – but it carries a undeniable moral weight. Equally obviously, the claim is simply untrue. Clinton will ultimately win between one and two million more votes than Trump.

I don't know enough about the way the Google News algorithm works to say exactly what's gone in here, but I can guess and say that the currency of the story – the number of times it's been cited and linked to – pushed it to the top of the news search results.

This isn't immutable. The Post's screenshot of the result looked like this:

By the time Buzzfeed screenshotted its search result, the Post's story had hove into view, for presumably the same reasons the fake story was elevated. 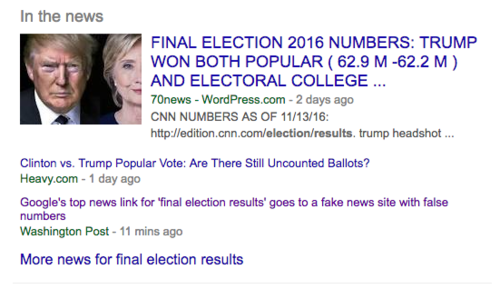 Another report by Business Insider found other debunking stories beginning to populate the results: 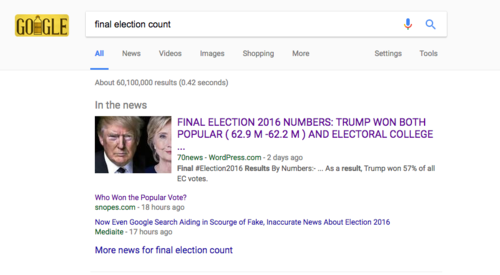 So debunking fake news is worth doing. But I tried the same search just now – and the fake story is still the lead result. 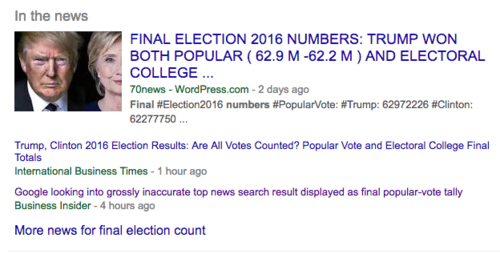 Google isn't doing this deliberately. It's not a corporate plot. Remember, Eric Schmidt, the executive chair of Google's parent company Alphabet Inc, was an informal advisor and donor to Barack Obama. He's also an investor in The Groundwork, a data company used by the Clinton campaign.

So what the hell is 70News and how is this happening? The Post's story notes that the report on the Wordpress-hosted 70News is based on a tweet, which in turn cites USASupreme.com – a site which occasioned the memorable Wonkette headline Hillary Clinton Threatened To Murder Bernie Sanders, Says Credible Not-Russian-Sounding News Site back in August. The Wonkette story is worth reading for its forensics on how that particular fake news story was put together.

A couple more things about USASupreme: whoever writes it appears not to have English as a first language – and they freakin' love Wikileaks and Julian Assange. 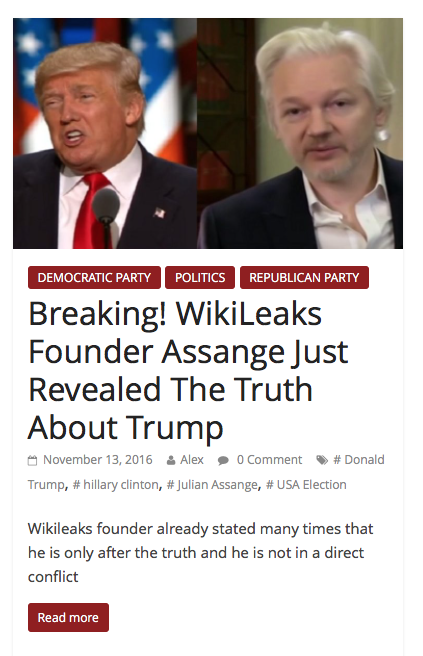 So once again Assange the man who exposed the truth about Hillary Clinton to the world has confirmed that Trump is clean and it is the democrats that made so many bad decision over the last couple of years.

USASupreme also really likes – and I'm guessing this isn't going to come as a total surprise to you – Vladimir Putin: 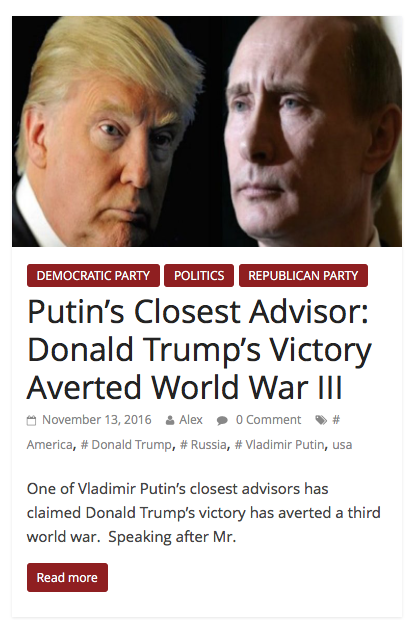 The belief that Hillary Clinton, if elected, was going to precipitate World War III was remarkably popular in the weeks and months before the election, especially amongst professed left-wingers.

Does USASupreme spring from the bowels of the now infamous building in St Petersburg where a "troll army" labours to influence the beliefs of Russian and other citizens? We can't tell. But this story on what happened when Swedes debated whether to join NATO – a flood of confusing information and outright falsehoods into the public discourse – is interesting. And sobering:

The claims were alarming: If Sweden, a non-NATO member, signed the deal, the alliance would stockpile secret nuclear weapons on Swedish soil; NATO could attack Russia from Sweden without government approval; NATO soldiers, immune from prosecution, could rape Swedish women without fear of criminal charges.

They were all false, but the disinformation had begun spilling into the traditional news media, and as the defense minister, Peter Hultqvist, traveled the country to promote the pact in speeches and town hall meetings, he was repeatedly grilled about the bogus stories.

“People were not used to it, and they got scared, asking what can be believed, what should be believed?” said Marinette Nyh Radebo, Mr. Hultqvist’s spokeswoman.

“The dynamic is always the same: It originates somewhere in Russia, on Russia state media sites, or different websites or somewhere in that kind of context,” said Anders Lindberg, a Swedish journalist and lawyer.

“Then the fake document becomes the source of a news story distributed on far-left or far-right-wing websites,” he said. “Those who rely on those sites for news link to the story, and it spreads. Nobody can say where they come from, but they end up as key issues in a security policy decision.”

Although the topics may vary, the goal is the same, Mr. Lindberg and others suggested. “What the Russians are doing is building narratives; they are not building facts,” he said. “The underlying narrative is, ‘Don’t trust anyone.’”

“The Russians are very good at courting everyone who has a grudge with liberal democracy, and that goes from extreme right to extreme left,” said Patrik Oksanen, an editorial writer for the Swedish newspaper group MittMedia. The central idea, he said, is that “liberal democracy is corrupt, inefficient, chaotic and, ultimately, not democratic.”

Another message, largely unstated, is that European governments lack the competence to deal with the crises they face, particularly immigration and terrorism, and that their officials are all American puppets.

Sound familiar? Every time during this US election campaign that I got involved in a social media argument with someone telling me things about Ukraine or Syria – which was far too many times – I'd find myself explaining that I actually follow a few people who cover those conflicts closely, and none of them say that's what's happening. Sadly, I was often referred to screeds by John Pilger that didn't tally with any reliable reporting either.

Meanwhile, the Wikileaks Twitter account gushed with misleading, out-of-context or outright false characterisations of material from its email troves. The Infosec Taylor Swift account has been on a tear about this over the past couple of days:

"WikiLeaks spreads information."
Like telling bigoted nationalists how Hillary's campaign murdered a dude and is run by satanists? Remember? pic.twitter.com/Bex8OIBX7z

And it's still happening:

Yes, you can literally die and, against your family's own wishes, Assange will go on national TV and lie about your death for his own lols. pic.twitter.com/XlcWHeb2m0

In truth, it'll be hard to tell what proportion of the bullshit is deliberately propagated and how much is simply an exploitation of the click-counting programmatic environment in which news must dwell these days. I don't think Mark Zuckerberg likes fake news any more than you and I do – it's just that the business model has evolved around it. The cancer has incorporated itself into the body.

This is not to say that Clinton, the USA and liberal democracy itself are blameless innocents in the world. But something pretty nasty is happening here. And by the way, a white supremacist publisher of fake news is going to be chief strategist in the Trump White House.

But I will tell you one thing: think twice before you complain about the "mainstream media". News organisations aren't perfect, but they've been basically your only bulwark against all this. Indeed, one of the few pleasures of the ghastly Presidential campaign was discovering the work of a host of good journalists – from David Farenthold at the Post to feisty independents like Sarah Kendzior. It's not just the Post and the Times, it's  Buzzfeed and Snopes and a hundred others. It's all those people literally put in a pen at Trump rallies. It's going to be a tough few years for some of them.

A couple of days ago, Silicon Valley investor and "contrarian" Keith Rabois posted a string of tweets along these lines.

Wait until journalists learn that today's AI is close to writing news stories on par or better than they do.

He seemed to enjoy the idea. We should run screaming from it. As Facebook moved from human curation to trust arficial intelligence to sift it stories, fakery exploded. It was a Google algorithm, not an editor, that made a wholly false claim about the popular vote the "top" story in its rankings. The idea that AI will actually write most of the news we see is genuinely horrifying.

Be nice to the next journalist you see. You'll need us.