"Go the All Blacks!" said the young woman. I smiled and gave her the thumbs up. It was a scene so ubiquitous on Cup Final Day as to barely be worth remarking on -- were it not for the fact that I was at the fence of the Occupy Auckland encampment in Aotea Square and she was an Occupy organiser.

I was on my own mission, and had stopped only to photograph the many signs displayed by the occupiers (I wasn't the only one doing that either), but I was pleased I'd included the occupation in my game-day ride. I think one thing the Auckland occupiers really got right was not setting themselves against the Rugby World Cup, which would have been death to any idea of an inclusive action.

They even managed to get the lawn they are occupying declared an alcohol-free fanzone for the final -- rather brilliantly, this required Murray McCully's signature -- and staged their own symbolic rugby match on Saturday. Spokesman Campbell Jones spake thus:

“Aotea Square is the only alcohol-free fan zone in the inner city,” he says. “It’s a great place for the kids and we’d like you to join us for an exciting night.”

“There are a lot rugby fans at the occupation who are fed up with the 1% constantly moving the goal posts for the 99%.”

Although there has been wide-spread speculation over the Occupy movement’s true goals, Jones refused to confirm rumours Occupy Auckland wanted to secure the best seating to watch the game live.

As the tone of anti-capitalist protest goes, this is something new.

On the other hand, Auckland's occupation isn't quite the entirely novel action we associate with the Occupy movement. There were two separate Facebook groups looking to Occupy, and the more organised one -- the bloc associated with the Unite union -- seems to have got its way on most things. Which is fair enough: organised groups achieve things.

Essentially I'm more sanguine that Gordon Campbell is about the realities of consensus decision-making. The Atlanta video I incuded in my earlier blog post about Occupy was a good example of how even -- or perhaps especially -- the elborate consensus practices of Occupy can simply be another way of leading crowds along.

But Gordon's column is worth your while reading. He also links to a Bernard Hickey column about Occupy, in an effort to define some potential demands for Occupy Aotearoa (the Wellington organisers say there are no demands and it's not a protest). Bernard suggested:

1- A land tax to rectify the transfer of wealth to the landed generation and make our budget more sustainable.

2- Reversing the tax cuts for the highest income-earners, which are not working to boost economic growth and are being paid for by foreign borrowing.

3- Joining the European push for a global Financial Transactions Tax to forcibly reverse the financialisation of the economy.

4- Avoiding taxpayer bailouts of our biggest banks. The Reserve Bank's Open Bank Resolution proposal is heading in the right direction.

5 Extending the retirement age to 67 over time.

6- Our banks further reducing their reliance on foreign bank funding that can freeze in a crisis.

7- Pulling out of free trade talks with the United States, which is an enemy of free trade and bankrupt politically and financially.

8- Balancing our budget as quickly as possible to reduce the burden of debt on future generations.

9- Reducing consumption of imports, and saving, producing and exporting more.

It's the policy prudence approach to capitalism, rather than a movement against capitalism itself. I suspect it would not meet with the approval of many of the occupiers, but for so long as they insist on making no demands whatsoever, it will be for commentators to fill the gap.

Dame Anne Salmond, in an elegant column run by both Fairfax and APN papers, took a less prescriptive approach to necessary change:

We must demand of our leaders - and ourselves - that at the very least, the land, the sea and our young people are cared for. Without them, there is no future. I agree with Phillip Mills and Sam Morgan that there should be a redistribution of wealth in New Zealand. Recent studies link high median incomes with prosperity and stability, and wide disparities with economic fragility and failure.

We should expect the press to deliver vigorous, informed debate. Democratic principles must be upheld, and dictatorial styles of leadership resisted. MMP is helpful here, and the cynical abuses of our electoral system in Epsom and elsewhere are a disgrace.

As Sir Paul Callaghan has argued, technical and entrepreneurial innovation is crucial. It is not sufficient, however. In New Zealand, world-leading ways of delivering on justice, care for the environment and for others are also vital.

Again, much of this may not be what the occupiers here, in America or anywhere else the movement has caught on, actually think ought be done, to the extent that what Dame Anne actually thinks should be done is clear. (I noted in my earlier blog post that the respective demands of different Wall Street occupiers were sometimes in conflict, to put it mildly.)

Dame Anne copped a fairly stinging response from her fellow historian Dr Paul Moon, who assailed everything from her vagueness to her syntax.

Yet there is some general, fuzzy agreement abroad that -- as we wait for the seven billionth human on earth to be born -- there must be some change; that capitalism as currently practiced is not working in the interests of a majority.

That feeling -- and it is a feeling for most people, rather than a thought -- has probably played a role in the relatively benign municipal attitude to the the occupations in Auckland and Wellington, and the general tone of media coverage. But now the Cup is over, patience may end too. Alastair Thompson at Scoop reports that "rumours have spread through the four Occupy Aotearoa camps in Auckland, Wellington, Christchurch and Dunedin that a police eviction operation may begin as early as dawn tomorrow."

I would be surprised if the police were happy about buying a new fight only days after the RWC (where, for all the reasons they have given us to lament their actions in the past few years, the police handled things calmly and sensibly), but this action does have to go somewhere from here. If nothing else, the Auckland occupiers will need to bear in mind that they're sitting on a precious piece of green space intended for working people in the city.

We'll be looking at all that and more in Media7 this week, with Bernard Hickey, Dame Anne Salmond and Alastair Thompson. If you'd like to join us for tomorrow evening's recording, we'll need you to come to the Victoria Street entrance of TVNZ after 5.15pm but before 5.40. As ever try and drop me a line to let me know you're coming.

And for now, here are some signs: 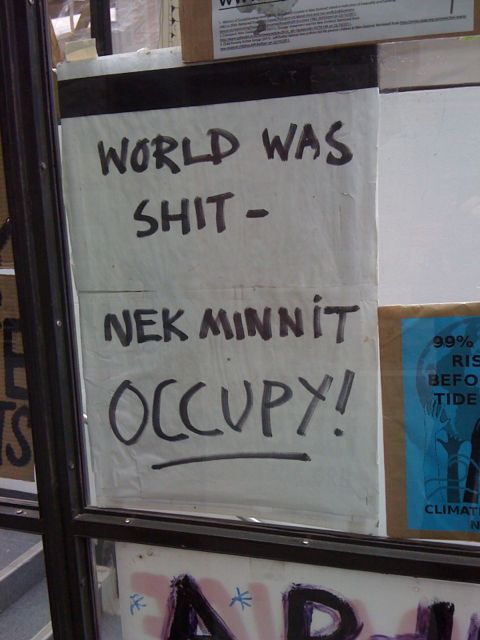 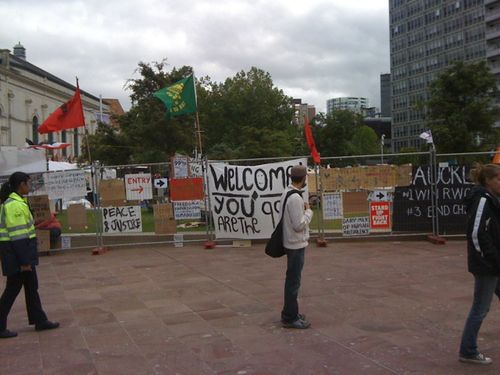 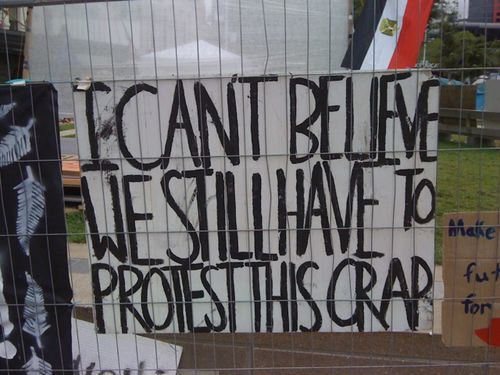 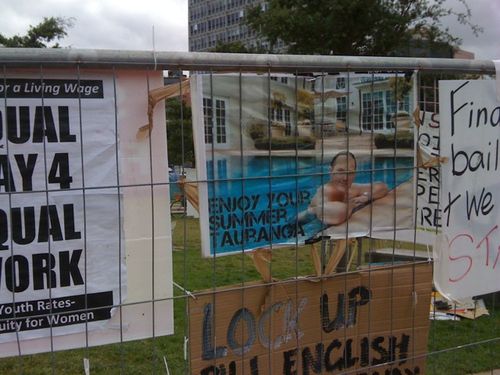