There are many delights to be found at Auckland Museum's Outrageous Fortune exhibition, but the big thrill for me was right by the entrance. There, under glass, are the writers' original notes, draft scripts and -- thrillingly -- the shows that didn't get made.

Yes, the fabled version of the first episode with narration by Loretta is there (the plan was to have each episode narrated by a different character).

And so is the Van and Munter spin-off rejected by TV3. That opens with our rascally heroes being anally probed aboard an alien spacecraft. No, I am not making this up.

What happens next, I cannot tell you, because only the first page of the script is visible. I feel cheated. Where's Wikileaks when you need 'em?

It's apparently considered a bit risqué for a museum to devote such an exhibition to a commercial TV show, but I'm delighted it has done so, and I think it's particularly appropriate that the Auckland Museum recognises the screen production industry that's such a big part of the city's creative culture.

It was also appropriate to kick things off with a proper party. The very large crowd whooped and hollered as Sir Don McKinnon (who seemed to be having a fine time himself) introduced the series creators, the cast, Robyn Malcolm and the "I am Cheryl" finalists. Later, Hello Sailor played upstairs and the bar got drained.

And I heartily approve of the decision to not only allow photographs in the reconstructed Chez West, but to let people make themselves at home there. Fiona and I sat down for a while on that couch and just smiled and looked around for a while.

"Excellent Draska tribute there," I observed. "Oh, hang on. That is Draska."

The obvious delight that cast and creators were taking in the evening really made it for me, and it was especially nice to meet Robyn herself. After the year she's had, she deserves a fun night out. 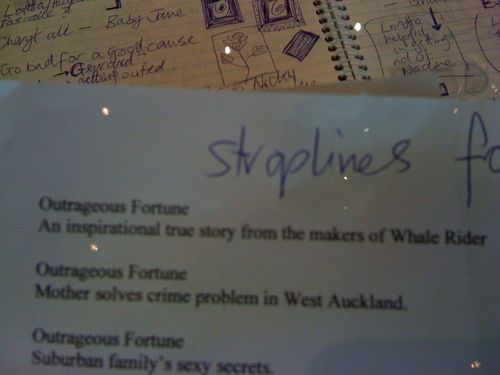 On Saturday, I attended a very different exhibition -- but one perfectly in line with the bold brand that Christchurch Art Gallery has established for itself.

The two most intriguing and provocative art shows I've been to in recent years -- Daniel Crooks' disarming video works, which play with space and time, and et al's haunting political fantasy 'That's obvious! that's right! that's true!' -- have been staged by the Christchurch gallery.

Well, make that three. The Ron Mueck show, 13 works until January 23, is moving and extraordinary. It's as if some trauma has yanked his characters through a wormhole and dropped them in the gallery -- confused, scared, lonely, unexpectedly exultant.

The most obvious characteristic of Mueck's scultures -- their hyper-reality -- is not the point in itself, but a means by which to bust through the viewer's intellectual fourth wall and let us feel what the characters feel.

Mueck further modulates the emotional signals through scale -- the 'Dead Dad' is but three feet long, diminished and powerless. The newborn baby is a leviathan. I wanted to comfort the tiny old lady, shivering in her bed.

When I emerged into a blazing Canterbury morning, I was silenced.

The only downside of the exhibition? The people who spent more time pointing their damn camera phones at the works than simply looking and contemplating what they had to say. It was generous of the gallery to allow photography, but I could have done without it in this case.

I think it also warrants saying that the gallery's advertising campaign for the Mueck show got me there. I'd been seeing the outdoor advertising in Auckland, so I was aware of the show -- and then the billboard on the airport approach road sealed the deal.

And a nod also to the gallery's project manager, Neil Semple, who saw my flabbergasted post-Mueck tweets and got in touch to offer Public Address readers a Christmas treat.

So … I have five double passes to the Ron Mueck exhibition to give away, along with (for those who've seen the show already) five signed copies of the exhibition catalogue.

To enter: click the little envelope icon at the bottom of this post to email me with either MUECK: TICKETS or MUECK: CATALOGUE in the subject line.

As the title indicates, this post was intended as a summary of the cultural year. But my cultural perspective is too narrow for that (perhaps Dr Gracewood will lead a literary discussion) and my memory is too patchy. So this will have to do.

Prediction: the best female vocalist category at next year's Music Awards is going to be a humdinger, and this is why …

I was sitting in my hotel room in Christchurch last Thursday after a delightful evening out with Emma and Karl, scrawling some notes for the next morning's presentation, when I realised that Modern Fables is my favourite album of 2010. It's hard to believe that an artist capable not only of writing such honest, sophisticated songs but singing the way she does spent the last few years working in a clothes shop in Melbourne. In a just world, Julia Deans will henceforth earn her keep with her wonderful music alone.

I wrote a little while ago about the pleasure of watching Ladi work over the years, and now seeing her arrive artistically with this record. It seems that she and Parks will see a lot of summer in the next few years, as they travel between New Zealand and their new second home in Germany. And that's right and proper -- because this is an eternal summer record.

The Fall bored me into leaving early this week, but it wasn't a wasted evening, because I got to hear Street Chant tearing it up through the big Powerstation PA. An old friend of mine, a musician, in town for The Fall, was almost in tears as he heard them for the first time (he wanted to go and give them a hug for playing such great rock 'n' roll, but we agreed that could be seen as inappropriate). Again it's not just the chops (in particular, Emily is a fantastic guitar player) but the brilliantly structured songs. I hope 2011 delivers for Street Chant (if it does, they'll be spending a lot of time in America), because they strike me as an exceptional band.

Of records not made by New Zealanders, this is the one that has stayed with me. It's a record about love, loyalty and growing up -- and sometimes playing up. Alexis Taylor wrote 'Brothers' for his actual brothers, but it works too as a song about a man and his mates. As he sings, "We play to be free." (Also, look out on the internets for 'I Feel Bonnie', the rework of 'I Feel Better' with Bonnie Prince Billy on vocal duty.)

Also: best digestive aid: The Phoenix Foundation's Buffalo. This always seemed to be the album I'd put on at dinner time.

Best big, bad bangin' dance track: 'Finally Moving Remix' by Pretty Lights. (Yes, boys, your dad is dancing on his own in the kitchen -- he's also doing the dishes.) Free download here or go to Pretty Lights' website for name-your-price downloads of all his records to date.

Live shows? Jeez, that's taxing the memory a bit, but Paul Weller and Leonard Cohen were marvellous, and Dizzee Rascal stood out from a pretty humdrum Big Day Out lineup (hey, but next year -- how good is that looking?). Ladi6 was a joyful evening at the Powerstation.

And last week's Lawrence Arabia show at the King's Arms was quite the most pleasant I've attended in a while. It wasn't just the 'Legends of New Zealand Cricket' theme (James in full umpire kit, a copy of Save the Last Ball for Me: The Chris Pringle Story proudly displayed at the door) and the artful pop, but the people. I swear, Lawrence Arabia attracts the nicest crowd in all creation. And most of them know all the words to 'I've Smoked Too Much'.

I'm sorry to say I only went to one play all year, and that was Gagarin Way last week. I loved its blend of intellectual fancy and physicality, and I loved the fact that it wasn't in a theatre. I would like to see more plays that aren't in theatres.

Television? You probably haven't seen it yet, but the second series of Misfits is even better than the first. It's stylish, funny and constantly surprising. Among other shows sent to me on VHS by friends abroad, The Walking Dead was a zombie story that didn't suck, and the BBC three-parter Welcome to Lagos is the best documentary I've seen all year. Nick Dwyer's Making Tracks is a continuing delight. And yeah, that Outrageous Fortune programme was pretty bloody good.

Best cultural event I was involved with: The Orcon Great Blend 2010. There was only one Great Blend this year but it was a success in just about every way I can think of. And before you ask, I'm having a meeting today about how we can get the #OGB to Wellington and Christchurch this summer -- and I have a seriously good concept for the next big one at The Edge.

Please do feel free to share your favourites and fill in the gaps in my tastes. And also, a self-interested request: it occurs to me that I'm bored with my current cultural websites. So do share your best links in the discussion for this post.

But wait! There's beer! Monteith's have a website for their new Single-Source lager (the idea is to establish traceability and a link to the land where the hops and barley are grown).

The question is: What variety of hops is used in the Single-Source lager?

Up for grabs: FIVE one-dozen packs of Monteith's Single-Source lager, delivered to where you live. Click the envelope button and email me with MONTEITH'S and the answer in the subject line. I'll do a draw some time tomorrow.