Next Wednesday, the winner of the 2014 Taite Music Prize is announced at a ceremony in Auckland. As always seems to be the case, the list of finalists is all-killer-no-filler:

Past Taite judging panels have shown they're not shy about serving up a surprise. But one winner on the night is already known. This year's Independent Music NZ Classic Record is the legendary Ripper Records punk compilation AK79. And I'm delighted to say that you can find out everything you need to know about that album, in both its incarnations, in Simon Grigg's new feature article for Audioculture.

In keeping with the Audioculture style, the article is illustrated with some great photographs, including more from the amazing archive of Sara Leigh Lewis. But it's a Murray Cammick shot from 1978 that really makes me happy. The Scavengers, outside the Windsor Castle in 1978: 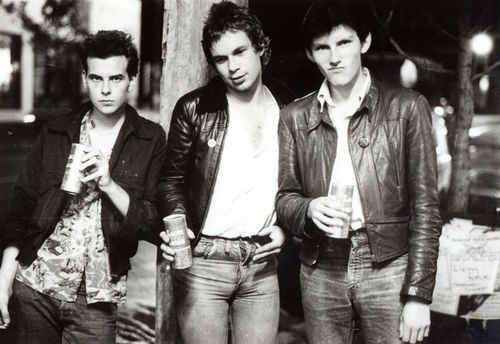 I wrote recently that major music companies and other copyright holders seemed to have struck a balance in their approach to Soundcloud between policing and permissiveness, allowing what is an increasingly important channel for them to maintain its vitality. (Lorde, recall, first reached the word via Soundcloud.) Turns out I have have spoken too soon.

There are reports that the UK record industry group the BPI intends to increase the pressure on Soundcloud and, if necessary, flood the site with takedown requests. I'm unsure what they think they're doing here: Souncloud has tightened up considerably in the past year. There are relatively few original master recordings there without permission now and if the BPI intends to crack down on re-edits, remixes and other derivative works, it will be scoring the biggest own goal imaginable.

The DJ Dimitri Paris posted this on his Facebook page this week:

Everyday, there is more of you visiting my Soundcloud page and that of other music people, from small to big.

Finding there a wider variety of music, than what the more mainstream media, have to offer.

Major labels (Universal Music Group, Sony-BMG, Warner-EMI) constantly remove content from Soundcloud, automatically taking tracks down without notice. That content their robots remove, legally belongs to them, even though some real people at their head offices decide they don't care to make it available to you.

Content that is most times spontaneously reinterpreted and curated by music loving people (edits, mixes, mashups etc) to share with others alike, adding to its value in the process.

Content from artists whose repertoire is owned by majors, which they don't care to exploit.

Content that you can choose to listen and share, and that at this time cannot be made available in other (legal) way.

Ultimately content that spreads the music, and legacy of the original artist beyond financial motives.

While this system is indeed not retributing the original artists, it can benefit both them and the "Soundclouders" by boosting their notoriety, something the majors typically don't make hard cash from.

So rather than set out to get income for themselves AND the artist by exploiting the music they own, Major labels take the YouTube - If I Can't Have It I'll Break It - approach so that eventually no music can't be heard unless they say so.

Peter McLennan rounds up the heartbreaking losses from the Kilbirnie self-storage fire.

SJD's first album, 3, is now on Bandcamp, at a price of your choosing. Excellent.

It's probably entirely fanciful, but Prince to play Glastonbury as a supergroup with members of Led Zeppelin has to be the musical rumour of the year.

New on TheAudience: Valere, whose 'IKTL' is a sparse, measured, interesting soul tune.

In quite a different vein -- that vein being a cool, accomplished indie rock vibe -- Brendan Lott out of Blenheim:

The strange and mysterious Jordan Reyne is back. This is, in her words, "a song made of vocal loops that tells the tale of a mysterious town where people are taken to become something they are not." You can pre-order the EP it's from (the first in a trilogy) at her Bandcamp, where she also explains what her new recordings are about.

I heard great things about Estere's opening set for Erykah Badu this week. If she got you interested, there's plenty like this for download from her Soundcloud:

I mentioned Dimitri from Paris above. He has an amazing playlist of his remixes on Soundcloud, and most of them are available for download. They include this official remix of Danny Hathaway's 'The Ghetto':