In 2004, Wired magazine edtor Chris Anderson wrote a famous feature called The Long Tail, in which he proposed that the infinite shelf space of the digital world would create a new paradigm for digital retail. One in which the combined value of everything that wasn't a hit would exceed the value of the hits. In the case of music, it seems reasonable now to say the long tail is a myth.

One part of Anderson's prediction has come true: because there is room for everything on the shelf, there is more music available to audiences than ever. The other part? Not so much. Last week, I was given a copy of a paper called The Death of the Long Tail: The Superstar Music Economy, by Mark Mulligan of the media consultancy Midia. It contains a killer fact:

The top 1% of works attract 77% of global artist revenue from recorded music.

As Mulligan puts it:

The democratization of access to music distribution has delivered great benefits for artists but has contributed to even greater confusion for fans, ironically culminating in an intensification of the superstar effect, with the successful artists relative share of the total pot of musical works getting progressively smaller.

In other words, in a world of endless availability it is becoming harder for anyone but superstars to get attention. The report says that digital music catalogues now typically hold 25 million songs and some digital music services are expanding their catalogues at a rate of 100,000 songs per month.

This means that however good a music discovery and recommendation algorithm might be, it needs to get 100,000 tracks better at its job every single month just to be as good as it was the previous month. More tracks paradoxically means less discovery. There is so much choice that there is effectively no choice at all. This is the Tyranny of Choice that in turn leads to mainstream consumers flocking, like the sheep that they are, to the familiar and the easy to find.

But the vastness of the global catalogue means that the 1% isn't actually as tiny as it sounds. It's 250,000 songs. That's at least 100 times more than might be played in a year on a commercial radio station. But Mulligan says that the share of income going to that "superstar" catalogue is increasing. 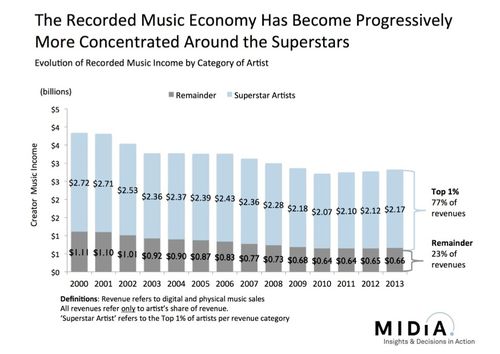 Superstars aren't suffering as badly from the music industry's chronic decline in revenue and are seeing far greater benefit from digital income (streaming especially) than the others. One important point is that this doesn't necessarily mean that the remaining major labels are scooping all the income. Some of the biggest albums of the decade (Adele's 21, for example) have been released by independent labels.

Interestingly, physical music sales (compact discs) show less of the concentration than all the new platforms. 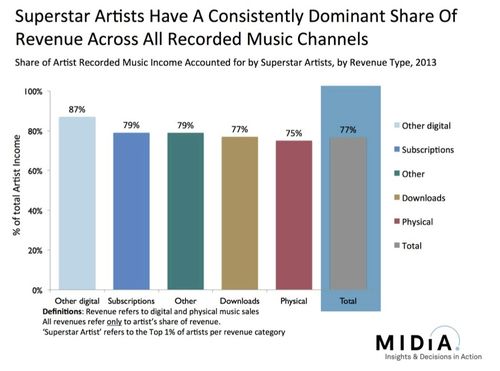 But the way the global catalogue has grown actually exagerrates this effect The long tail is stuffed with shit no one wants to buy: vanity releases, soundalike records, etc. Mulligan actually suggests biting the bullet and cutting this "pollution" out of major music services altogether. At the least, removing it from the statistics might give a better impression of what's really going on.

There's also the fact that while there might be shelf space for everyone and everthing, display space is shrinking. A music service, be it iTunes or Spotify, can't show you very many things on your mobile phone screen.

And here's where I think the oligopoly of music retail has a case to answer. In a way, it doesn't matter if many worthwhile releases are hard to find on the most mainstream platforms, so long as customers are aware of and have access to place where they do wash to the top. That's why I think curated retail spaces like the one Flying Nun Records has created for its own and like-minded releases in the Flying Out store are really valuable.

Maybe there's a way that this can happen for streaming platforms too, but for the time being, stores like Flying Out are branding themselves on vinyl sales. Vinyl is a niche market, but a thriving one -- even the major labels are selling heaps of it. It's quite likely some of the vinyl customers are listening to the actual record (which will typically ship with a download code) infrequently, or even never. They just like an object to treasure. It would indeed be quite an irony if we were to discover that the market of objects had saved the soul of the market of bits.

You know what I find wearying? The annual whingeing about New Zealand Music Month. Folks, please: it happens every year and it's a pleasant time to focus on an art form that, despite the odds, is still lively.

One thing it's nice to see back is Kiwi FM's Short Sets, in which invied artists play two of their own songs and a local cover version. You can catch the video of yesterday's set from Sherpa on the Kiwi FM Facebook page. But the one I'm really rather up for is today's session with Arthur Ahbez, who now has a live band. You can hear that at 4pm today on Charlotte Ryan's show on Kiwi FM.

Next week's lineup (all at 4pm on Charlotte's show) is as follows:

The sets will also go up on the Kiwi FM Soundcloud page.

In a similar vein, mad props to Hugh Sundae for the work he's been doing in streaming live music month shows -- including returning to his post in a cast yesterday after breaking a bone in his foot during the setup. To judge by his Twitter, nitrous oxide agrees with him.

Also of note on the Herald site, The Great North's Hayden Donnell (who is a journalist at the paper) explains the events that inspired the group's forthcoming album, Up In Smoke, including a loss of faith not only in God, but in Bruce Springsteen. You can listen to a stream of the album ahead of its release next Friday.

And, finally, Hugh and his team have polished up the audio on their Taite Prize coverage and you can see Kerry Buchanan's excellent speech about the AK79 years here, about eight minutes in.

Local and freshly out this week ...

And on the heels of a great cameo on A Hori Buzz's 'Providence' (see last week's post), Tali has a new single of her own. And as more-or-less a soul tune, it's a bit of a change of pace:

Also on TheAudience, I really like this hazy indie tune from Shukan, a 20 year-old Los Angeles native living in New Zealand:

In our occasional series of covers-that-really-shouldn't-work-but-do -- The Horrors cover Frankie Knuckles' 'Your Love'. No, really, it's pretty amazing:

Tomorrow evening, I will be doing a little digital DJing at my dear friend (and longtime makeup artist) Carla's 40th birthday party. I will be dropping the following. All the ladies on the dancefloor ...

The ladies may also be hearing this big cuddly dub of a remix of the Barry White classic: