Let's face it, there are many more important things to get exercised about than a new pop music video. But it does appear that some people actually hate the new video made by the award-winning Special Problems for Lorde's 'Tennis Court'. It appears that it might have been safer to put the band in a car or something.

My response on seeing it was that its full-on first-person style was a gutsy creative move -- especially when the person is a 16 year-old girl. But there's no doubt that Lorde has the presence to carry it off. She really does continue to impress:

Also, I've been listening quite a lot to Dan Aux's remix of 'Tennis Court'. He doesn't really change the tune so much as take it up a notch:

My friend and occasional collaborator Blair Parkes now has a blog as a home for his music, art, craft and writing. He posts something most days,  so it's worth keeping an eye on.

This week, he released Black Circles, a new EP from his solo project Saturations ("exploring space, time and pop"):

The EP's title comes from this art project, where he's expanded on the technique of the Chimney Book work we helped him present, in painting alphanumeric characters on sets of found objects:

Black circles is a project based around a collection of black vinyl circles offcuts  found during the demolition of the Addington Railway Workshops in the early 1990s. They are 52cm in diameter.

Individual characters have been painted onto the circles, photographed, digitally manipulated and recomposed. 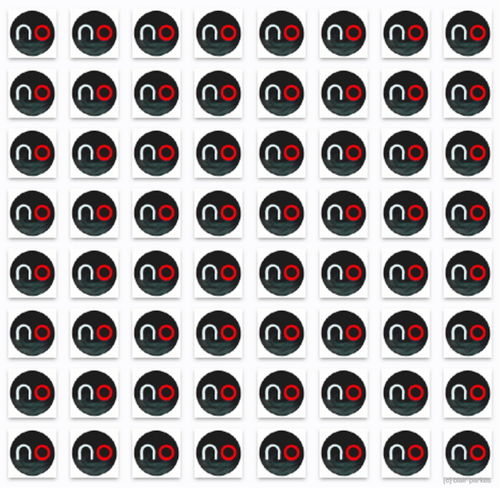 Blair is busy in New Brighton.

Speaking of determined, idiosyncratic artists, Pretty Lights' album A Color Map of the Sun is finally out on Monday, but you can stream the whole thing already from his website and, if you wish, pre-order various physical permutations of LPs, t-shirts, bags, etc. He wrote this on Soundcloud:

Like always, the album will be available in its entirety as a free download on the album's release date via prettylightsmusic.com. For the first time however, I encourage you to purchase a copy of the album. There are two honest reasons for this. The main reason is that as an artist I have always reinvested any success I have directly back into the music, the show and the art that goes along with it. Secondly, this isn't just an album; it is a massive collection of music beyond what is on the CDs that I will continue to put out after the album release. There is an insightful documentary film on the making of this project to be released alongside the launch of the album, as well as a music video for every song. They are all beautiful and uniquely unusual pieces of art.

This "album" is a multi-medium map of my mind and my self. It is personal and honest and I put everything into it. I have stayed on the path of being a completely independent musician and with the help of every supporter and friend, we have transformed a simple idea into a movement, a cultural beacon of light. If you can, I encourage you to purchase a digital or physical copy of A Color Map of the Sun. If not simply support by sharing the music and sharing the idea. If there is any success to be had from this album, it will go back into my rule bending, never ending quest to channel beauty and taste through music and art.

And the album? It's fuckin' chunky.

If I might be permitted a plug, I think the Lawrence Arabia-Sam Scott collab at our Orcon Great Blend wevent in Wellington on July 10 is going to be very enjoyable. And it's free! You just need to RSVP at the link here.

I've told Sam, who recently revealed his personal pain over the way no one in his band will let him play clarinet, that he can play any reed instrument he likes. Because we're supportive like that at Public Address.

The Other Crate Record Fair has moved from Morningside to Britomart.  It's on tomorrow from 10am to 2pm at Tyler Street Garage -- and I'll be playing some records at some point after noon. Not feeling any pressure about the fact that that fact got plugged on Base FM this morning. None at all.

But hey, come on down tomorrow and do some crate-digging. These events have a nice vibe.

There are a few new things on Audioculture this week, but the big one is Peter McLennan's profile of the legendary Phil Fuemana. As ever on Audioculture, the photos are a particular delight. Check out Greg Semu's pic of Phil with an old-school brick phone. (Pleased to see a link there to my old Planet magazine interview with Phil too.)

Over at TheAudience, Randa, who's been a bit of a noise about town lately. I can see why:

What Benny Tipene sounded like before X-Factor (well, to be fair, what he presumably still sounds like when he's not on X-Factor):

But I still think the Dead Beat Boys are the freshest old-school rock 'n' roll I've heard in a while ...

I've been enjoying this groovy bag of reworks by Cousin Cole of tracks by the singer Misun, who I'd never heard of. She's a bit Santogold, a bit Lily Allen. You'll need to click through to download the tracks individually, but they're all free:

And finally, maybe see you here tonight. Its the Drab Doo Riffs' release party at Galatos and also features an appearance by the Hallelujah Picassos. But I don't mind saying that what I'm quietly excited about is the opening set -- David Saunders with Street Chant as his backing band. And yes, they will play 3Ds songs. And yes, that means Emily Littler will be playing the David Mitchell guitar parts. Can you say, "murderous right hand"?