A week or two ago, I was talking with a local record company person who mentioned the name Thomas Stoneman -- a kid who, he said, "every record company in the world wants to sign at the moment." It sounded interesting, but the name didn't ring a bell for me.

It wasn't until I read Mike Chunn's opinion piece in the Herald this week that I made the connection. He noted that Stoneman, who attended Avondale College last year, was a co-winner of the 2013 Lion Foundation songwriting competition and records as Thomston. That did ring a bell.

Back in the January 10 Friday Music post, I noted that I'd found this track on TheAudience and ("another talented, moody, confident kid comes out of nowhere") was impressed by it.

I'd love to say this was the blog that made him the most-wanted, but, as Mike explains, that probably happened about a month later:

On February 12 this year, Pigeons and Planes posted another tip page, headed"Daily Discovery: Thomston, a Teenage Pop Artist from New Zealand". Thomston is the stage name of Thomas Stoneman (Avondale College, Auckland last year) who was a co-winner of the 2013 Lion Foundation songwriting competition. The next day, the A&R director at Atlantic Records in New York emailed the Play It Strange office asking if we know how to get hold of one Thomas Stoneman. We oblige. On February 18, Thomas emails with news that his homemade EP which Pigeons and Planes picked up has had 35,000 plays on Soundcloud since the post and he had inquiries from 11 record labels. Presumably Atlantic Records in New York was one of them.

Remarkably, Pigeons and Planes, a reatively small, discovery-focused music website, also seems to have played a role in the early buzz around Lorde and in the interest that got Broods a deal.

"Revolutionary young artists achieve distribution through the technology of sharing," Mike declares, and he's right. It's fascinating to see the established music industry now so fully invested in a principle that even five years ago, it might have found threatening.

So you (and anyone else with an internet connection) can go to Thomston's Soundcloud page and download all five tracks from his debut School Night EP for free, just as for months anyone could grab Lorde's The Love Club EP and 60,000 people did.

It helps that Soundcloud has found a sweet spot: it's respectable enough for record companies to use, but still free enough to allow the edits, remixes, covers and other derivative works that provide a good deal of the creative vitality in the new world of music.

Examples: the oldest thing on Wellington producer Eddie Johnston's Soundcloud (as Race Banyon) is his remix of Drake's 'Forever', posted two years ago to a reception that clearly surprised its creator. This isn't unusual. Playing with other people's pop music is one way to work out your own. The first thing I ever heard of FFFRRANNNO was his sweet bootleg remix of Miguel's 2012 R&B hit 'Do You' (which you can still download for free here). I don't think I'd ever even heard the original. (You may note that FFFRRANNNO's management contact is now with Saiko, the company of Lorde's manager Scott Maclachlan.)

It also helps that there is actually something going on here: an aesthetically cohesive group of young local producers taking a cue from the pop music around them, but doing something distinctive. The interest of international record companies is not unwarranted.

I've had time to write a few things for Audioculture lately, and have thoroughly enjoyed doing so.

Those things include an essay on the landmark Flying Nun release the Dunedin Double EP, featuring The Chills, Sneaky Feelings, The Stones and The Verlaines. It's hardly a perfect record, but it is a hugely important one that embodies a great deal of Flying Nun's mythology. And if this pic of The Stones doesn't bring joy to your heart you may be Matthew Bannister. 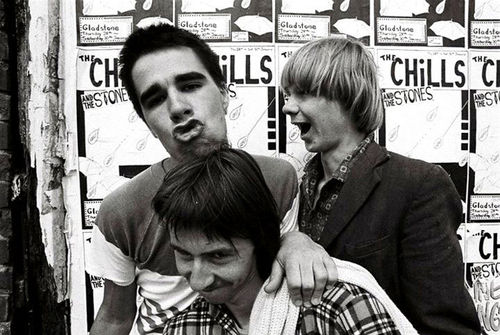 Having been out of print for 17 years, the Dunedin Double is lined up for a re-release by Flying Nun on Record Store Day, April 19 (along with with Bored Games' Who Killed Colonel Mustard?).

You'll definitely want to visit this blog on Friday, April 18, when I'll look at some more special re-releases and have a few to give away.

Also new by me on Audcioculture, the Jean Paul Sartre Experience article, which I hope explains why they mattered and dispels some misconceptions.

One of the reasons I keenly follow Jonathan Moore, aka Leftside Wobble, is that we seem to have a fair bit of musical schooling in common. In particular, the acid house revolution in late 80s London. So I'm delighted that he's been posting a few of his go-to tracks from that era, including this superb edit of Charles B and Adonis's acid classic 'Lack of Love', to which I will introduce the neighbours later this afternoon:

So, you know, 'Royals' went to the dancehall with Busy Signal -- but have you heard this excellent dub version?

That's derived from a nice roots remix which is also a free download here.

An intriguing edit of a 1976 Alice Cooper track by the hyperactive Russian DJ Shanti. Like most of his edits, it's not really a tune some much as a track to mix within a DJ set, but it does underline the fact that early 70s rock 'n' roll was funkier than you think:

But I don't think anything from that era is funkier than Suzi Quatro's 'Your Mama Won't Like Me'. I have this on 7" but I hadn't played it for years until I dropped it when I was doing a guest slot at a record fair and just thought, wow.

And just for good measure, a mad clip of her playing it live in Japan in 1975: