If you happened to see Australia thump India in the last of their Cricket World Cup warm-up games last night, then you got a first look at the coverage you will see throughout the tournament. And you quite probably thought something along the lines what in the name of all that is holy am I watching?

The coverage is being produced by the Indian-based, Murdoch-owned channel Star Sports, which has paid millions of dollars to be the Cricket World Cup 2015 "host broadcaster". The ICC is billing it like this:

It won’t be possible for all cricket fans to be in the venues to watch the action first-hand so the next best thing will be ICC Cricket World Cup 2015 broadcast’s array of on-air enhancements and compelling and new graphic presentation to accompany the insightful and trusted voices of its expert group of commentators.

What that long and unlovely sentence actually means is this. Some version of this video game-like status bar, bobbleheads and all, takes up the bottom of the screen though most of the live action, including when deliveries are bowled ... 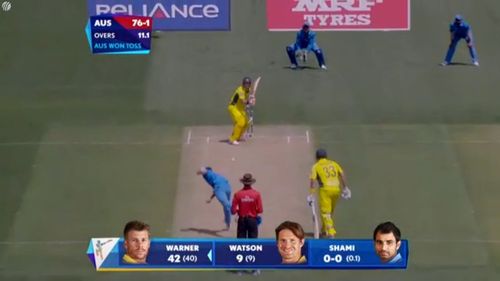 And when shots are played ... 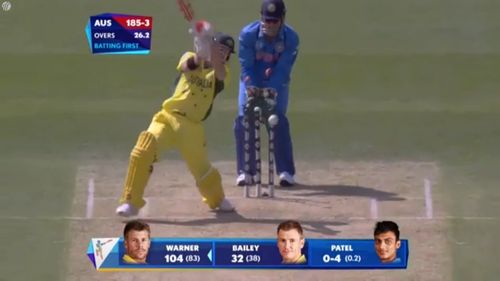 Cuts between replays are stuffed with pointless, ugly visual garbage. The "on-air enhancements and compelling and new graphic presentation" look, frankly, like something the eighties called to say it didn't want back.

But it's not just the ugly graphic bling. On the highlights video here, look at Mitchell Johnson's dismissal from 02:21. He skies one and the cameraman and director are flailing first to get a shot that isn't obscured by the bar, then to find the ball, and end up with a crash zoom on the catcher. It's all over the place, like neither of them know the ground. There were other such wobbly moments in last night's coverage.

That's presumably because the "host" broadcaster has shipped in as many as 200 production staff for the Australian games and an unknown, but presumably large number to run coverage at New Zealand grounds. The Australian's "security fear" angle today is silly, but the rest of the story is interesting:

The mass of foreign workers for the World Cup has upset ­unions, crew and local broad­casters for a number of reasons, including job security, safety, the degradation of wages, and the possible outcome the event will not even provide a net economic benefit to the local broadcast sector.

Safety is a particular concern. Workers needing to be inducted to work at the SCG, for instance, are doing so via computer link rather than face-to-face. It is believed the ICC’s document on safety for broadcast crew is three pages long; its document concerning the protection of image and ICC branding rights is 60 pages long.

There are doubts foreign workers are doing the induction themselves, with fears that they have also had their visa applications completed for them in such a way to bypass normal visa ­restrictions.

Indeed, it is not even known what class of visa the inter­national broadcast crews are using to enter Australia, meaning they will be paid below the required pay rates and not subject to local employment terms and ­conditions.

The paper says production call sheets indicate that 85% of crew on the four teams Star Sports has assembled to deliver coverage here and in Australia will be flown in. On the evidence of last night's game – which at times was genuinely hard to watch – it would seem that we're in for significantly poorer coverage than we're used to.

This is all about money. Star Sports has paid millions to the ICC so it can embed adverising and sponsorship IPL-style into the coverage. With India playing poorly and the more reliable commercial opportunities of the IPL lined up directly after this tournament, that plan appears not to be going too well, but you can expect in-game advertising to be normalised like it never has been before in an internatonal cricket tournament.

Maybe last night's match was a rough dress rehearsal. Maybe we'll grudgingly get used to the bling. Or maybe we'll find ourselves thinking that WASP wasn't so bad after all.

There, in all this, one small but unalloyed mercy. The "blended" commentary teams have been announced. And amongst the 30-odd former players lined up to talk over the pictures, one name is missing. There will be no Danny Morrison.