I believe New Zealand's future can only be as a republic. I am not, as a matter of course, particularly interested in the Royal Family. I do not, unlike the people who grieved so extravagantly after the death of Lady Diana Spencer, fancy that I have any personal connection with them.

And yet tonight, we'll be having a few friends over for a curry (proper British), a few drinks and a gander at the telly. (Actually: TVs, iMac, iPad -- it'll be a sort of telepresence experiment.) It seemed foolish to pass up the opportunity offered by the extremely social hours at which the royal wedding will take place in New Zealand. Awesomely, two rather compelling sporting events will be broadcast live in the early part of the evening.

Think of it as Naan Bread and Circuses. I'm done speaking to truth to power for the week and I'd quite like a laugh.

So while I respect the righteous disdain -- hell, contempt -- expressed this week by the likes of No Right Turn, it's not in me. Indeed, for the British at any rate, I do see a place for the monarchy, subject to the will of the people. Living in Britain during the Thatcher years, the monarchy seemed to me a mild force of moderation, or at least of some constancy against the works of people who wanted to take shears to the social fabric.

If the Windsors were allowed to stay on in a symbolic and ceremonial role, of course, they'd have to pay their own way. And they largely do. The Civil List costs the British taxpayer £37 million annually, but the royals, by some estimates, bring in about half a billion pounds a year in "royalty tourism" revenues. They're the world's top royalty brand.

We don't plan to even mention the wedding on Media7, but there's a festival of party-style media deconstruction beckoning. We've already seen Wendy Petrie's whoopsie:

And Alex Jones' 'Secrets of the Royal Wedding Exposed':

Charlie Brooker has been typically funny -- at the same time as the Guardian correctly notes that Sheikh Khalifa Bin Ali al-Khalifa, a former head of Bahrain's National Security Agency, which has been accused of torture and human rights abuses, will be at the wedding. He was invited a matter of course in his role as ambassador of Bahrain. It's more disturbing to think of him at his desk every day than that he'll attend a wedding.

On the Listener website, Fiona Rae has fetched up the magazine's coverage of the 1947 and 1981 royal weddings, with page and cover scans. That's a lot of fun. And Guy Somerset has an excellent pick of suitable videos for the day.

I sincerely hope that the last-minute restraint of The Chaser's planned alternative commentary on the wedding (it would have been great to have watched online tonight) will be answered by a tide of mashups and parodies.

There is of course this, if it all gets too much: 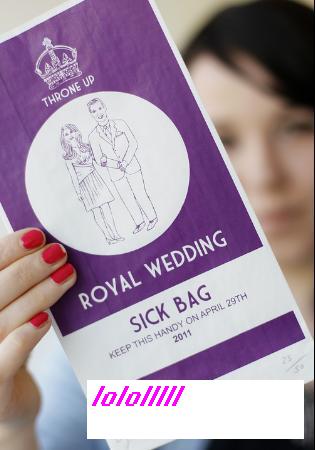 There are curiosities in the 96-page official media briefing. The Prime Minister's wife will be there as "Mrs John Key" (better than "John Key +1", I guess). Most dignitaries "have been invited with their spouses or partners if married or in a civil partnership", but an exception seems to have been made for the Prime Minister of Australia and her very good friend, Mr. Tim Matheison.

Were I in the midst of it, I suspect I'd be more cynical. My British-based friends seem to be. I think I'd have grabbed those three days of annual leave that connect up Easter and the official wedding holiday into 11 glorious days off and gone somewhere nice. Even the anarchists just seem to want to be left alone to enjoy a nice day at the pub.

But the appeal of watching it from a distance is almost the opposite. As well as the frocks and funny hats, there will be London, live on the telly. There'll be a sense of familiarity. It'll be fun.