One flood ago now, a group of we dog walkers had a shifty chat down in Hansen's Park. It's a lovely Christchurch riverside park that doubles as an epicentre for quakes, the last a magnitude four about ten days back. The talk was with two of the older regulars, who confessed they were off to Nelson, sold up, cashed up and ready to go.

Looking about us, the other two of us admitted we had started to nurture similar thoughts.

Rufus's owner has young kids, I have older kids doing NCEA plus two geriatric delinquent parents just hanging on in their own home. And Nina, last winter's pup.

What we older ones realise is that a functioning metropolitan city will arise again too late for us.We and what was are over.

We live five doors up from the river, out of the flood zone by two doors but close enough for very little comfort as our low profile Heathcote turns feral.Not as flashy and florid as Flockton but scary nonetheless.

After the big February 22 quake I lost my words for years. I did manage one big spit on Stuff before I went mute, a piece headed up “We are not ruined, here”.

At the time I meant it.

Now I'm not too sure, and the fact I and mine have long deep roots in Canterbury no longer has the same hold.

It's not the ceaseless quakes, rumours of quakes, loss of city centre, or the endless cultural imperialism of “experts” jetting in to tell us how to fix things. Nor the institutionalised brutality of the EQC/Fletchers repair process that crushes and shortchanges far too many blameless people.

The dreadful collapse of the Chistchurch City Council into a spineless soundbite looking for a photo opportunity until very recently did not help. Our city has CERA because it failed not only to pick up the ball and run with it but indeed to even get in the game. That's got better since the local body elections saw off the soundbiters almost as a seamless job lot of discarded “media personalities”.

Outside of our shattered and split city, we hear the perplexity that it is still not fixed.

If you don't see 80 per cent of your city centre fucked, it is hard to understand just how stuffed lots of Christchurch is.

Or that below decks even more unglamorous devastation lies, which means you can go looking for pipe and find it a metre above, below or beside where it is meant to be.

Even in Christchurch people had very little idea of how close the city came to a major infrastructure collapse of water and sewerage systems.

The math of the quakes is numbing; 14,000-plus and still rocking at times.

I have a PTSD specialist shrink friend in the States who is adamant there is no benchmark for the level of psychic hits and trauma Christchurch people have  had.

He says that a year after the last big one will be when we start to emerge from what has been a collective state of clinical shock.

To that I can add both my agreement and my own own weary testimony.

There's something inside us as people that generally means we can hit the skids , dig deep, skid, dig deep again and repeat. Until we can't.

We got there as a family over a year ago when a hell virus came and stayed for nearly six immobilising months. We became very ill indeed, and soon ate through a redundancy pay-out and our savings. Over the last year we have glided glumly out of the middle classes, farewelling bit by bit our long-time trappings of middle New Zealand life.

I am stunned to be nearly 60, in an unfixed house and cash poor. It is simply not the way my life trajectory has gone for a very long time.

We grow food, which helps, but now with nearly half the annual rainfall already we can't. The ground is sodden, wet and cold. The floods this year are finishing off hope amongst the wounded of our city.

As the election year bullshit builds up into a chorus of blandishments and blame, the reality is we trust nobody past the neighbours and friends who have stepped up after each disaster.

I know the PR/politics game inside out, having worked both sides of the fence.

That said, as the rain starts and the river rises I know we and any others need lots more than photo ops and faux empathy.

If there is still a social contract intact in Christchurch it is, to invoke the Rolling Stones, torn and frayed. We feel not only abandoned  and lied to but beyond weary, beyond worn and just plain scared.

The land has sunk, the rivers have risen. People have not heard the truth, that land keeps moving for years after a major hammering like we have had.

If we had a “one in a hundred year flood” in March, a hundred years just rushes past so fast now that two more centuries have come and gone.

Yesterday (Tuesday) I stood by the Heathcote River near our street corner and watched not just the usual silt and shit-laden waters flood, but rubbish bins floatimg and garbage spilling from them. Last night, for the first time, I and Sharon both felt beat, defeated and ready to go.

I don't think we are alone. The dog walkers will bear me out once the waters recede enough to walk in the park again. 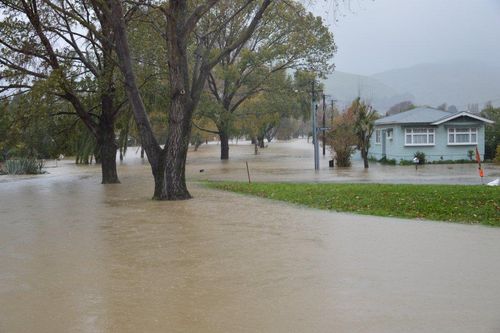 Our street corner yesterday. For the third time this year. (Photo: Sharon Murphy)