Earlier this week, David Farrar posted a WSJ chart that he says shows the solution to Auckland’s housing crisis. The chart, shown below, shows US cities that have grown outwards have affordable homes, while cities that don’t grow out get more expensive. That, Farrar says, means the obvious solution to Auckland’s woes is to grow outwards:

If you want cheaper house prices in Auckland, vote for a Council that will make more land available.

Let’s look at the WSJ chart more closely. Most of the cities that have become really unaffordable haven’t released as much land for very good reason – they’re already jutting up against coastlines and mountain ranges. You simply can’t expand LA to the south or west, because you run into the Pacific ocean. Boston can’t go east, New York can’t go south, San Diego can’t go west, and so on.

By contrast, many of the rapidly expanding, affordable cities David Farrar points to as sit away from the coast, on relatively flat land. Six of the seven fastest expanding cities in the US – Atlanta, Austin, Charlotte, Orlando, Phoenix, and Raleigh – fit this mould. Las Vegas is the only partial outlier.

So, which of those groups of cities do you think is more like Auckland? The ones where you can build outwards in any direction, or the ones hemmed in by geography?

It’s not a hard question, as the illustration shows. 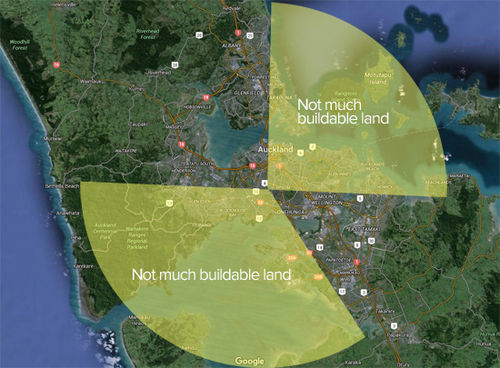 Over 60% of the area surrounding Auckland isn’t at all buildable, because it’s in the ocean (~50%) or in the Waitakeres (~10%). That’s what makes it more like New York or LA, and less like Atlanta or Austin.

Meanwhile, while National learns how to read a map, house prices continue to skyrocket, as Duncan Garner has illustrated today.

It's a tragedy topped with a farce.

Don’t get me wrong, expanding Auckland north and south should and will happen, just as there has been some enlargement in the unaffordable US cities. But it will never be a complete solution to the housing crisis, because there’s s so little new land for so many new people. Not even close. It simply has to be paired with new restrictions of demand, and with building and intensification in existing residential areas.