We’re closing in on the end of the first full year of the electoral term. So how are things shaping up for 2017?

Let’s start with the current polls. Taking an average of the last 6, they show the left-bloc (Labour, Greens) polling around 43%, up around 7% since last year’s election, or up 6% if you call Internet/Mana “left bloc.” The right bloc (National, Conservatives, ACT, UF) scores an average of around 49%, down  little more than 3% from 2014. Centrist parties (NZF, Maori Party) are on around 8%, down a couple from 2014.

That’s a pretty good year of recovery for the left, but of course it isn’t yet enough. If the next election were held right now, you’d very likely see another National-led government.

But the next election isn’t being held right now. It isn’t for nearly two years. So the big question isn’t so much“where do we sit right now,” but whether we’ll see the broad trend of voters drifting from right to left continue through to 2017.

The online prediction market iPredict suggests it will. 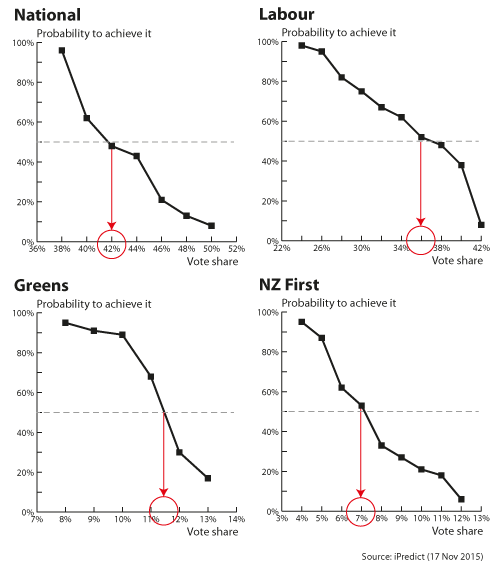 The charts above show the probability that iPredict investors give to parties achieving various vote shares. The vote share they think a party is 50% likely to achieve (that is, equally like to achieve it and not achieve it) is the closest we have to the market’s best guess today about the 2017 election.

On that basis, here’s where the market thinks we’re most likely to land after the next election:

That result represents a continuation of current trends. It suggests the left picking up another 5% over the next 22 months, and the right losing another 5% or so.

As the comic (credit: xkcd) shows, there are all sorts of potential problems with simply assuming current trends will run into the future, but nonetheless the punters at iPredict are picking it as the most likely outcome.

Should the election come out that way, New Zealand First would have an interesting decision to make. Winston would have to weigh up the fact that more people voted for a change in PM than voted for the current one, and the fact he really dislikes Key, against the fact he’d get more power as #2 to National than as #3 to Labour and the Greens.

He would face the choice between again being a larger part of thwarting plurarity preference for a change in direction, and again propping up a decaying government, or being a smaller part of a vibrant, new direction for New Zealand.

iPredict seems to think Winston will choose National more than he’ll choose Labour in that situation. They give National a 58% chance of remaining in power, despite suggesting the right will most likely lose to the left by a substantial margin. They think that for Winston peters, more-power-for-me trumps giving-effect-to-the-collective-will.

Of course, Peters’ ability to choose for New Zealand depends on Labour and the Greens not getting to about 49% - at that point they’re probably home as a two-way coalition, or at least able to govern with UF or the Maori Party rather than Winston. The iPredict most likely scenario isn’t far short of that.

On the flip side, for the left to rise above a combined 42% - let alone touch 49% -  it will need both Labour and the Greens to perform well, remain disciplined, and capture the imagination of ever more of the population over the next two years. But as this last year has shown, they’re up for the fight.