Ah, nationalism. How it craps all over you when you least expect it. Unless you’re a minority of some kind, and therefore expect it constantly. That’s probably why some of us don't have much invested in rugby, which is serving me rather well right now.

Plenty of New Zealand-born ethnic minorities though, are just as crazy about national sporting teams as the rest of the ‘kiwis’. Maybe even more so. One of the two New Zealanders Of Colour I was watching the game with in Geneva (the one wearing two All Blacks shirts, one on top of the other and no, he wasn’t going to share with me or the other New Zealander Of Colour), had to go home directly after the match in a fit of depression. The other just pretended for a while that he wasn’t depressed, that he was only sad for the country, for all those people who really care about rugby, before going home an hour later in a fit of depression.

I wasn’t depressed at all. I was actually immediately worried about all those people who were going to be getting the bash in the usual post-defeat backlash against those real harbingers of the All Blacks' twenty year losing streak: the nation's lippy girlfriends. Yep, history repeats.

It’s odd that although I'm no rugby fan, I also seem to have a much greater sympathy for the All Blacks in the midst of this orgy of recrimination than that expressed by some avowed rugby maniacs. It was lamer than lame to see a commenter on PA System laying into Dan Carter for crying publicly and thus showing to a horrified world that he was not a real man. Is this 1956? That kind of weird anachronistic macho criticism makes me all the more fond of Dan Carter. I think they all need a bit of a hug. Especially Dan Carter.

If you’re seriously blue, look at it this way. The French may have a shot at the World Cup, but they also have Sarkozy. They needed a break to feel better about themselves.

My 21st century guess is that teams of individuals who end up winning or losing a rugby match don’t do so because their country is famed for breeding assholes (sorry, ‘mongrels’) who never cry and instead just beat up their wives. I have this strange feeling that whether or not a country as a whole feels good about itself, or 'hard enough' or 'too soft', holds precious little sway over the abilities and successes of its sporting teams. I might even hazard that sporting success could be something to do with sports instead: talent, resources, training, and conditions of specific games, as opposed to the psychology of the nation. Hey, look at Switzerland, where I'm living right now! Europe's new far right Heart of Darkness. Women prevented from voting in some areas until 1991. How much more manly can you get? And pretty crap at rugby.

It's the reverse path of cause and effect that is out of control - the impact that the success of one's sporting team has on received 'national identity'. People wouldn't be so cruel to a losing All Blacks side if they didn't care so much - about how it makes them feel. That's sort of like saying your boyfriend beats you up because you screwed up making the fucking eggs in the last half, but also because he loves you, so that's ok. Not much comfort; and not true anyway.

It's can't just be me and Idiot/Savant - there must be other people who really don't care that much, are a bit freaked out at these nice bulgy-thighed boys, and their shadowy counterparts, the nation's vulnerable abused women, all getting the bash. There must be people, like me, who are confused to find out that the 'inquest' into the quarter-final loss refers to a real inquest, not a metaphorical one where boys just weep and cry out 'why? why?', then punch each other in the arm for crying.

Could all come down to the ref though.

I've found, through this impervious experience with national loss, that a little baseline suspicious antinationalism goes a long way. It protects you from these strange moments of national frenzy and breastbeating over sport, even if it can't protect the rest of the country.

That’s not the purpose of this kind of ethnic minority-brand suspiciousness of course, it’s actually formed in order to protect you for when the shit really hits the fan, and you get sent to the internment camp for your own protection, during a spot of futuristic geopolitical bother involving some kind of proxy-war north of Australia. You need to learn faith in what you think the country actually stands for, not in what it, uh, ends up doing to you.

So hey, maybe I am the ultimate traitor, what with the not caring much about the rugby, and with the leaving of the country, and I was even a little apprehensive of being facebook-lynched by my sarcastic status-update: “Tze Ming is sure that the Burmese democracy movement is taking a moment to send positive energy to New Zealand to help our fragile nation with its identity crisis.” (more on that later)

I even sang along with the French national anthem a bit.

Like Mr Slack, I was in a pub full of the French on Saturday, where I remembered again who Dan Carter was (oh, the hot one?) and that the French national anthem is probably the best in the world. It was lame as usual to hear the scattered New Zealand contingent in the packed pub mumble and vowel their way through the Maori verse (but it sounds better if you learn it in Maori, don’t you guys realise? AAAOteaaaaRROOOOOAAA...) and then let rip the English verse in all its mediocre glory. After which, it was blasted out of the water by the Marsellaise.

The French national anthem is so rousing. Blood, revolution, oppressors, militancy, glory, weapons. Fantastic. War: it’s just like sport, but you get paid less. It’s almost like they wrote the thing to prepare for futuristic sports tournaments, rather than to commemorate the violent overthrow of a tyrannical regime in the name of the people, only to institute a regime of further tyranny, cycles of instability, and an imperial expansionist war. Which reminds me, what’s the new Iraqi national anthem like? I bet it rocks.

You may have heard about the dominant party's now infamous posters for the upcoming election. In my part of liberal Geneva, the black sheep posters of the Swiss People's Party, led by Christophe Blocher, have been mostly defaced or torn down; here’s a shot the BBC prepared earlier, three white sheep standing on a Swiss flag, kicking a black sheep back over the border: "For More Security." 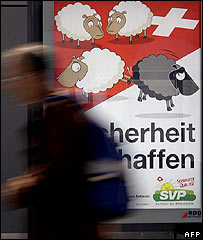 As part of the demonstration against some directly fascist-flavoured deportation policies of this party, the anarcho-kid wing of an anti-Blocher rally just tore up Berne in a serious riot, to depressing effect: a rise in support for the ‘respectable’ far right, with Swiss media showing only footage of the wholesome, cowbell-ringing pro-Blocher demonstrators, rather than the skinheads and neonazis also there in numbers. There are rumours of course, of agents-provocateurs planted in the anti-Blocher crowd. All the more reason for anarcho-kids to stop wearing those stupid fucking balaclavas.

My liberal Swiss friends (they exist) inform me that this country has major problems coming to terms with its past, particularly its complicity with Nazism. Now consider my situation: I am officially a Bad Migrant. I consider myself disloyal and transient in Switzerland, not actually a settler. I'm not even loyal to my home country's rugby team, and I definitely can't spell Switzerland in Swiss German. Actually, the Swiss Germans also cannot even agree on how to spell “Swiss German” in Swiss German. It’s that kind of language. I was an archetypal Chinese International Student at summer school here a few months ago: lazy at French, hung out with the Chinese girls a lot speaking Mandarin, and slouched around pool halls avoiding the Swiss.

As a result, the creeping fascism has led to the inevitable end for me. I am currently being forced to wear a yellow badge with a black sheep on it. Okay, it’s a protest badge, clearly. Cute! And at least one New Zealander here has thought it had something to do with the All Blacks, and New Zealand, what with the blackness, and the sheepness. But according to its semiotic layers, I am embracing and reclaiming my mouton-negritude*, while also rejecting it. Which doesn’t really make sense. But hey, this is Europe. It’s probably one of those ceci n’est pas un pipe moments.