It’s not often I get a column mostly written in my head, and then have to tear it up and throw it away. Surely that should be even less likely to happen with a memorial column: isn’t the subject the past? But this will be a very different column from the one I would have written two weeks ago.

I have very dear people in my life who come to visit Christchurch once or twice a year. Because they don’t see it every day, they can be our best guides to how things are changing. All those I saw around Christmas remarked on how the city felt noticeably better this time.

Much of this is the central city. Finally, more is going up than coming down. My own feeling is that the impression is due not so much to the completion of any one project, like the bus exchange or the Margaret Mahy playground, as the way the dots are starting to join up. The shops on New Regent St are no longer isolated. They’re between the Isaac Theatre Royal and the playground. St Asaph St is turning into a lovely bank of bars and restaurants that should be really nice if they ever stop digging up that road. We could do with more functional footpaths and bike lanes, but there’s obvious progress. I spent Sunday at Hagley Oval, the prettiest test cricket ground in the country, and yes I will fight the Basin Reserve over that title. We have pavement cafes and by gods we will use them. 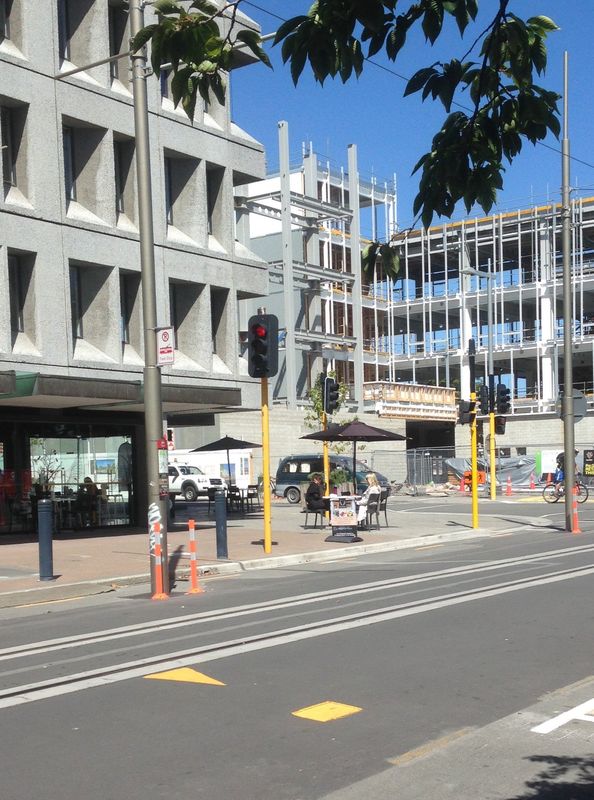 And then, things happened. Because this isn’t about the past, five years on. Things are still happening.

I was out in the garden when the Valentine’s Day quake hit. It was vast and rumbly and long and far stronger than anything we’ve had for years. I went inside, and I was right back to picking things up off the floor and cleaning nutmeg out of the pantry. A week later I’m still finding things that have shifted or fallen, and my bedside lamp will never be the same again. It’s not just one quake, either. It never is. Little aftershocks still rumble lazily on. We’d been so long without them, we let our defences down.

Almost immediately afterwards, we were told our mental health funding had been cut.

The babies born on the day of the quake start school today. Like the rest of our children, they’re more likely to show signs of anxiety and developmental delays. And I don’t know, you might be sick of us because of the way we voted (no we didn’t, but never mind), or our endless whining, or the way we want to keep complaining and yet won’t take your eminently sensible ‘just leave’ advice, but we’re a vulnerable population. When you neglect a vulnerable population, bad things happen. Bad, expensive things.

On a smaller but similar note, it turns out my kids’ old school has in fact not secured a rebuild site. This feels like yet another step backwards. Five years on, to have any school still in limbo, still in temporary premises, still subject to disruption, is not good enough.

What’s also not good enough is our public library. The Central Library wasn’t badly damaged by the quakes, and could have been repaired on its site for very little more than its insurance payout. But no. Because the convention centre. So five years on, we have two tiny ‘temporary’ libraries instead, and no sign of any permanent replacement.

It’s fair to say, my optimism has taken a few knocks, and not just because of the Australian batting I sat through yesterday.

So today we will remember. The important thing is, today we will be allowed to remember. We will be given space to be sad, to reflect on the way our lives have been shaken up. It’s good for our mental health. And then we will get up and get on, because as my mother used to say, there’s no other choice.