The first of a series of reports on New Zealand's role in the Five Eyes surveillance network has been published this morning across the news services of three co-operating media companies.

The principal reporter is Nicky Hager, whose book Secret Power first shed light on  New Zealand's part in the international spying network nearly 20 years ago. He has been working with documents from the trove held by NSA whistleblower Edward Snowden, supplied to him by Glenn Greenwald, whose news website The Intercept also reports the story today.

Hager reveals that from 2009, New Zealand worked with the US National Security Agency to move to "full take collection" of the communications of countries around the Pacific, including those with whom we are friendly.

The reporting adds substance to what's indicated in this 2008 slide, which has previously been released by Snowden and Greenwald: 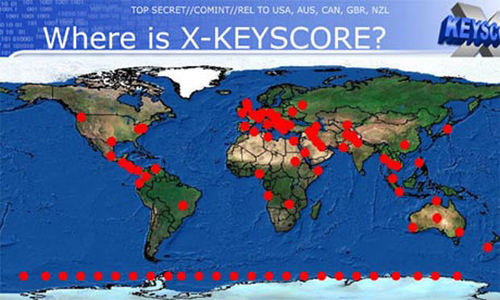 As the slide shows, the local centre for X-Keyscore, the "spy Google" the NSA uses to search and analyse global communications data, is the GCSB base at Waihopai. What we haven't known until now is the extent of the data collection New Zealand does in the region and when it shifted to the level of mass surveillance.

On Stuff, Michael Field does a useful job of explaining why we might want to eavesdrop on our Pacific neighbours, and there will doubtless be a range of opinions on the propriety of what what we're doing for our American friends.

But for now, it's interesting to look at the official response. When he was questioned yesterday by journalists about the story to come, Prime Minister John Key took what now seems to be standard approach to impending journalism: to defame the journalist:

Having yesterday dismissed Hager's story in advance as a self-serving lie – and suggested that only someone who was not "a good, hard-working honest, New Zealander" could think otherwise – Key is now declining to comment on the published reports at all:

"The Government will not be responding to claims made from documents stolen by Edward Snowden," a spokeswoman for Key said.

"As we saw during the election campaign, misinformation was put before New Zealanders in an attempt to damage the Government.

"The Snowden documents were taken some time ago and many are old, out of date, and we can't discount that some of what is being put forward may even be fabricated.

We "can't discount" that the Prime Minister is a space alien either, but it doesn't seem very likely. Indeed, I don't believe any document released by Snowden has even been suspected of having been fabricated. To say so is simply to cynically deflect the story.

I think we can expect a range of official contortions as this story unfolds over the next few days.