It's been quite the week for Broadcasting policy geeks. NZ On Air released its annual report for the year to June, and it's essentially a story  of trying to do more with less.

The agency spent $83.5 million funding 965.7 hours of TV programming -- that's 140 hours more with seven million dollars less than it had in 2009. The board included this warning alongside those figures:

Capped funding, along with increasing production cost and a growing number of project applications, means both the General and Platinum funds are under mounting pressure. We make increasingly difficult choices as we juggle constrained funds, a growing pool of successful series, and the desire to create opportunities for new ideas to be supported.

There has been a big change in music funding with the introduction of the Making Tracks scheme, which seems to have done what it was meant to do. From 1216 applications, 324 tracks were funded -- resulting in twice as many video grants and three times as many recording sessions. Again, more with less.

TV plays for music videos continue to head towards irrelevance. "These days the biggest music video bang for ourbuck is coming online." The biggest funded clip on YouTube was Kimbra's 'Good Intent', whose 4,469,021 views accounted for nearly half of the total views for NZ On Air-supported clips.

This graph also shows the internet growing in importance as a music discovery medium: 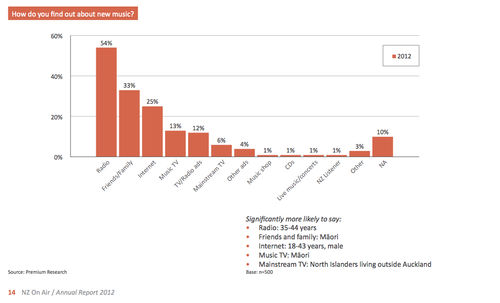 But radio is still where most people discover music. Also, radio programmers -- and presumably their audiences -- really like Six60.

Meanwhile, the Ombudsman has forced TVNZ to publish research from last year that shows that three quarters of the country was aware of the now-deceased digital channel in its last few months -- and it was being watched weekly by more than half of Freeview households. In other words, TVNZ 7 was doing quite a bit better than then-Broadcasting minister Jonathan Coleman seemed inclined to admit.

Until now, TVNZ has fought to avoid handing over the numbers to the Save TVNZ 7 group -- and it's taken so long that Save TVNZ 7 itself has now morphed into The Coalition for Better Broadcasting.

The new group was on the warpath this week over Sky's offer to bail out Auckland regional broadcaster Triangle TV with a free channel, 89, on its service from February. Triangle will rename as Face Television. Quoth the CBB:

In the same way that Quench or Raro are described as orange flavoured drink and not orange juice, Face should be described as "public service style" programming because it certainly won’t be the real thing.

But what was Triangle supposed to do? The company closed its digital channel Stratos last year, unable to sustain the cost of digital transmission after a Cabinet about-face on a transition strategy for regional TV, in which Stratos would have played a backbone role. And Triangle still has no way of affording a Freeview slot from Kordia (an SOE) when all analog broadcast is switched off next year.

It was like this: work with Sky (which has, of course, handily burnished its own community credentials by doing the deal) -- or just go out of business. Six regional broadcasters have taken up the $70,000 being offered via NZ On Air under the government's revised transition strategy, but it seems like too little money spread too thinly.

There is, of course, an irony here. While regional broadcasters still have no viable path to digital, even as digital switch-off looms,  Sky itself got a sweet deal to get Prime TV on Freeview -- on the guidance of the minister -- in 2009.

I'll be talking to Triangle boss Jim Blackman on Media3 this week. If you'd like to come along to the recording tomorrow evening (ie: Thursday), we'll need you to come to the Villa Dalmacija ballroom, 10 New North Road, at 5.30pm.