Back in June, I wrote a post about the consultation process with potential users of the most exciting part of the Nelson Street Cycle Route being delivered by the NZ Transport Agency and Auckland Transport – the swoop of the disused motorway off-ramp that will run from Canada Street, under Karangahape Road to the top of Nelson Street.

Auckland Council's short online survey offered options on the look of the road surface, from “Distinctly New Zealand” to “Words/lyrics/storytelling” and I wasn't alone in feeling that NZTA and its partners should just keep it simple and let the skyway be what it is. My preferred option was "Don't fuck it up."

Well, construction of the route is well underway and Matt at Transportblog has posted the pictures. The news is that they've fucked it up. Royally, and in a way that no one who looked at the survey options could have anticipated.

The cycleway in the sky will be closed in with three-metre high walls. 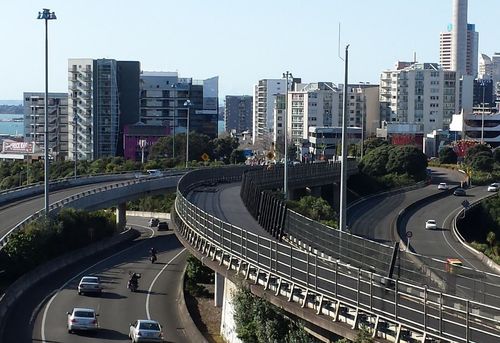 Yes, the walls to be affixed to the big metal pillars will be some kind of transparent plastic, but from a shallow angle, they will be decidedly less transparent. They will not have a direct bearing on the usefulness of the route – but they will rob it of most of its environmental joy. That is, of one of the reasons we ride bicycles in the first place.

The obvious assumption is that the high walls have been ordered to stop people throwing objects off the bridge onto the motorway below (which they clearly will not) or to stop people jumping or falling off. But if it's the latter, why do none of the bridges over the motorway network (including the recently-upgraded Upper Queen Street shared-use bridge) have similarly monolithic walls? Why has the soon-to-be-installed access bridge to the same cycleway been spared the walls?

I had planned to get out and photograph some of those other bridges, but Matt has already done that, so feel free to consult his excellent post.

So why has this happened? I can only guess that it's some attempt at design coherence with the 2011 K Road overbridge redevelopment. That, too, needlessly blocks the public view. (It also features shelters that do not provide shelter, and was badly received by users when it opened.)

There's also the soundwall that runs along the Freeman's Bay side of the approach to the harbour bridge. But that separates walkers and riders from the noise and peril of five lanes of motorway traffic. It addresses an actual problem.

But this? I'm dumbfounded. Apparently Transportblog got wind of the plan a few months ago and tried to talk NZTA out of it – but the panels had already been ordered from Germany. That no one thought this overwhelming feature of the cycleway's design warranted being part of the consultation process just defies belief.