The announcement of Phil Goff's intention to seek the Auckland mayoralty yesterday was able and organised. Various important constituencies were represented in the room, the messaging was precise and the first person to be greeted by name in the candidate's speech was the present deputy mayor, Penny Hulse. So she's on board.

I wasn't able to take an extensive look around, but those present also included Green Party Waitemata local board member Vernon Tava and Ranginui Walker and his wife Deirdre.

The banners flanking the stage read:

For A Better Auckland: A city where talent and enterprise can thrive.

Both the speech and the acccompanying video repeatedly hit this theme. Goff opened:

I’m standing for Mayor because I believe that together we can create a better Auckland. A city where talent and enterprise can thrive - whether you’re a hip-hop artist, a scientist, a tradie or a businessperson. A city where we care about each other, our environment and our way of life. That’s the city I want to lead.

The late scientist and entrepreneur Sir Paul Callaghan talked of making New Zealand a place where talent wanted to live. He got it absolutely right.

My vision is of Auckland unleashing itself as a creative, innovative and entrepreneurial city. It should be a centre of learning and a centre of culture. A city rich in diversity and proud of its Maori, Pasifika, European, Asian and other heritage.  A place that attracts and nurtures talent and enterprise. As we grow, we must be a city where trade and investment can thrive. Where business is easy to do.

And finally, hitting it again:

I’m working for a better Auckland.

A city where talent and enterprise will thrive.

The benefit of the "creativity and innovation" line is that it is so broadly aspirational: "a hip-hop artist, a scientist, a tradie or a businessperson," can all hear themselves being flattered and valued in it. Most of us would like to think of the city as attractive to the kind of talent we value. It's a fuzzy but clever message.

Goff alighted on diversity more than once, averring that:

We must be an inclusive city.  Where diversity brings richness not division.  A place where people don’t have to live in gated communities with poverty and homelessness on their doorstep. Where people can earn an income they can actually live on. A place where every Aucklander can reach their full potential.

You can't be part of local government in Auckland without talking about transport and housing. On the former:

We need to do more than just finish the motorway network. We need to get on with the city rail link to double passenger capacity and deal withcongestion at Britomart.  We need light rail on the isthmus, in the East and out to the airport.

My friends at TransportBlog coughed politely over the idea of light rail to the airport and Christine Caughey wondered exactly what he meant by "finish the motorway network" (was he raising the Eastern Motorway from the dead?). But there seemed no doubt that Goff supports the bus-trains-bikes strategy already unfolding in the city.

"It’s the same for housing," he continued:

There are ways to bring supply and demand in housing back into balance and Auckland should be strongly advocating for those solutions.  Policies that give the building industry confidence and certainty to gear up for construction. Policies that put home buyers ahead of speculators. More intensive housing in the city and along arterial routes is needed.  But that must be balanced by good urban design, plenty of public open space and protection for areas of high heritage value.

It got more interesting when he talked about paying for these components of the Better Auckland. There was a re-run of what he had already said in interviews about learning to do more with less:

... operate effectively and efficiently ... eliminate bureaucratic duplication and waste ... fiscally prudent ... Rate increases have to be brought under control and offset by cutting waste and finding savings.

He also repeated his criticism of the two reports on Auckland Council assets released last week as a "waste" of half million dollars: privatising Watercare or any other asset was off the agenda. Being a politician, he was then this morning all over the massive effective ratepayer subsidy to Remuera Golf Club members outlined yesterday by Bernard Hickey. The irony being, of course, that this story came directly from one of the reports Goff dismissed as wasteful and pointless.

But the other side of the financial message was more interesting.

Funding for this infrastructure can’t just come out of rates.  Auckland pays its fair share and will continue to do so. But the Government must also provide funding to meet the needs of growth. After all, a large portion of the Government’s revenue comes from taxes paid by Aucklanders.  It must bring the funding forward to anticipate future needs rather than waiting until gridlock paralyses this city ...

We need to put our own house in order and make Auckland New Zealand’s best performing city. When we do that, we are in a stronger position to leverage Government resources to meet the needs created by rapid growth ...

I know how central government works and what it takes to make it responsive to our needs.

There's a similar line in the video:

I know what makes central government respond positively. My role is to get the best deal for Auckland.

It seems likely that we're being primed for an administration where Hulse continues in her role of wrangling the various interests on Council and Mayor Goff talks to government, probably with a degree of Auckland Exceptionalism that will piss off the rest of the country.

And going by his quotes to the Herald after Goff's announcement, the Prime Minister is okay with that. I don't think the Right will try to put up a sensible candidate against Goff. For all that the capable Victoria Crone is musing about standing as an independent, she'd be mad to do so. Goff is standing as an independent, but he has an able and experienced centre-left machine on board. Crone, with no political experience and no machine of her own, would be obliged to go swimming in the crazy soup of the Auckland centre-right.

Perhaps Key reasons that giving the Auckland centre-right a leg-up would complicate the internal balance of the National Party. Morely likely, he realises that Goff already has a considerable head start and it would be better to work with him than to have to deal with a political neophyte, or worse, a flaming nutbar.

What this all means to contests within individual wards next year remains to be seen. I suspect the centre-left is hoping that backing a strong, experienced and well-known candidate will provide momentum and motivation. It could also turn out the other way, with centre-right candidates promising to keep Goff honest.

Goff was at pains to emphasise that yesterday was not a campaign launch, merely the announcement of his candidacy. Policy will come with the launch proper, next year. He has already drawn some clear lines: finance the CRL more quickly, prevent Port expansion into the harbour, don't privatise Watercare. But he will need to take good advice on what he chooses to say around the complexities of the Unitary Plan, the Auckland Plan and the Long Term Plan before having to actually state policy on them. Populism gets very perilous in that area, especially when you're promising "protection for areas of high heritage value."

But yesterday's launch was competent and confident. After he spoke, Goff circulated easily for photographs while the press waited at the door of the room. His meeting and greeting completed, he turned, strode to the door and delivered his lines. He clearly does know how this is done.

Phil is down with the kids. Phil is down with Auckland's ethnic communities. 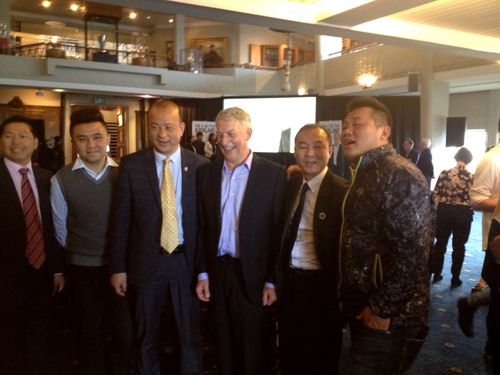 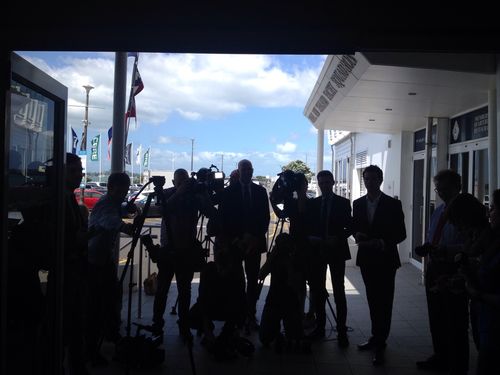 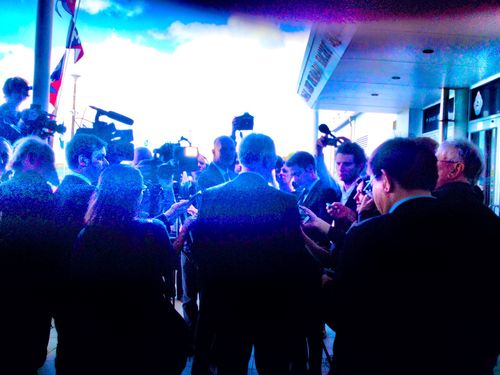