That we have a trade in synthetic cannabinomimetics is not, as most of the country currently seems to believe, a consequence of the Psychoactive Substances Act passing last July. That business existed before July and, indeed, was substantially larger and looser. The reason the market exists is because marijuana is prohibited.

One of the key arguments for regulation rather than progressive prohibition of psychoactive drugs is that the drug that takes the niche of the one you ban is quite likely to be worse -- or at least considerably more of a mystery. We've seen that with Ecstasy and LSD and we're currently experiencing a texbook case with cannabis.

Indeed, it may be that we've done the same thing with synthetic cannabis substitutes themselves. Remember, we're been banning these things for years. It's easy to forget -- and the news media doesn't seem terribly keen to remind us -- that back in 2011, Peter Dunne issued a press statement under the triumphant headline All synthetic cannabis products to be banned. No fewer than 43 products were removed from sale in one go. And then there were more. And more.

It's possible that along the way we banned products that, given the chance, might actually be deemed "low risk" under the Act and approved for sale. But my sense is that most or all of the synthetic cannabinomimetics (I'm training myself to use that term, because these chemicals aren't actually cannabinoids) aren't a good bet for regulated sale. While they have an affinity for same receptors in the brain as cannabis, they have a much stronger effect on those receptors and the consequences of that are unpredictable and, as we've seen, even dangerous.

And yet, prohibiting cannabis and then a string of cannabis stubstitutes has done nothing to remove cannabis's social niche. It's entrenched. And what's interesting is that we're starting to see mainstream voices calling for the thing that would have prevented a market for cannabis substitutes ever starting up: a change in the law around cannabis itself.

The Sunday Star Times' latest editorial goes further, pointing out that in trying a "laudable" new approach to these new chemicals:

Dunne and his colleagues have opened Pandora's box. Bercause if we're talking harm, then none cause so much misery as alcohol and tobacco. And under the same logic, the sale of MDMA, or Ecstasy to use its street name, should be legalised, -- since there are but a handful of deaths attributed to its use.

Sooner or later, we need a national debate on drug use and abuse: what we are prepared to tolerate, what is unenforceable, and where we should place our resources.

There may come a point when it is easier and more beneficial to focus on tackling drug addiction to through education and treatment rather than costly and increasingly futile attempts to ban them.

The alternative is to keep doing what we've been doing, in the knowledge that it won't work. At the very least, we need to sort out our thinking on whether it makes sense to try and protect people by criminalising them.

One little-noticed facet of the passage of the Psychoactive Substances Bill was the attempt by Labour's Iain Lees-Galloway to amend the bill to remove what became Clause 71 of the Act, which makes personal possession of an unapproved substance an offence punishable by a $500 fine, on the grounds that “Making the possession of an un-approved substance an offence does nothing to advance the purpose of the Bill." He failed, but he was right to try.

The New South Wales legislature has gone another way, passing a law that bans all psychoactive substances, including those yet unknown, with exceptions for alcohol, tobacco and some herbal products. This will not, needless to say, stop people taking drugs. It's hard to square with any concept of personal liberty. And, most significantly, it sharply curtails the state's ability to minimise the harm from drugs.

When New Zealand enacted prostitution law reform, we had to get past the barrier of prostitution being a moral issue. The reward was that for the first time, sex workers were not only not criminalised, but enjoyed the same workplace protections as other New Zealanders. That's a proper role of the state. We need to move past the morality question on drugs, too, and ask what the state's duty is towards the far larger group of New Zealanders who continue to consume psychoactive drugs.

I've requested and received some material from the Ministry of Health on the way that adverse reactions are being tracked under the Psychoactive Substances Act and I'm hoping to do some interviews. For now, this graph is interesting. It shows calls to the National Poisons Centre about synthetic cannabis spiking after the Psychoactive Substances Act became law in July last year. 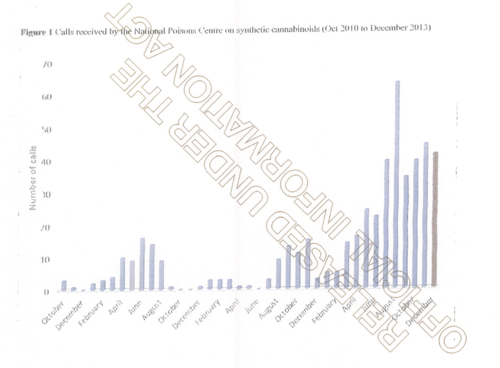 Why the jump? Because the Act immediately required that a contact number for the National Poisons Centre be included on product packaging. The ministry believes increased public awareness as a consequence of the bill being in the news played a role too.

Some calls were from people simply seeking information, others reported acute effects, mostly vomiting but also psychological distress. Significantly, callers were able to cite the exact product and active substance, because that had to be on the packaging as well.

The numbers are relatively low, averaging about two a day in the peak month, August. Data for January and February are being assessed at the moment. The NPC calls are one of several reporting sources reviewed by the Psychoactive Substances Regulatory Authority.