Jackson has posted some great photographs of Laneway 2018 in Capture. I'm glad he did, because, as is sometimes the case at the big events, I didn't take any. Well, inside the gates that is. I did take this pic of the situation that greeted us on arrival about 2.45pm. 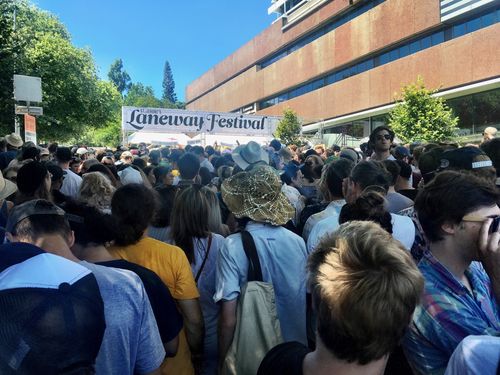 Apparently the problem was with all the millenials who don't own printers and just brought along their e-tickets on their phones. The barcodes didn't always scan well and the entry systems basically broke down for a while. It was pretty unpleasant – a few people needed medical attention – and would have been worse for those stuck on the sunny side of the crowd.

Happily, after collapsing in the shade to recover from the ordeal of getting in, the first thing we watched was one of the best Laneway performances I've ever seen. I knew nothing about Moses Sumney before the day, but he and his band were astonishing. He not only showed off a startling vocal range, but at times seemed to redefine what a voice even is.

This clip from a show in Rotterdam a couple of months ago captures something of what it was like:

One thing that struck me about the music of Laneway 2018 was how laid-back a lot of it was – occasionally to a fault (Connan Mockasin was so low-key that we just just drifted away to do something else). But the new venue seems to lend itself to a wider palette. Aldous Harding might have struggled in the capark environment of the Silo Park main stages, but at 6pm on Princes Street, shaded by towering trees, it seemed just right.

I also dug Slowdive (they basically do one thing but they do it really really well), Unitone Hi-Fi, Bononbo and, most especially Tokimonsta, who transcended trap and hip hop cliches to bring the breaks. I'm glad that many people seemed to enjoy Father John Misty so I didn't have to.

It was all-too-evident when we arrived that there were 2000 more people onsite, but that gradually sorted itself out and the event found a rhythm. I hope Laneway can stay at Albert Park for a long, long time.

As many of you will be aware, my old friend Grant Fell died recently, and the communities he was central to converged to say farewell. After his funeral service at St Matthew's in the City,  his friends moved on to Golden Dawn, where the Headless Chickens got together to play one last time in his memory, while everyone cheered and danced and laughed and cried.

I talked to Alex at Music 101 and Henry at the The Spinoff, wrote this Audioculture article and delivered a eulogy that at times had me battling keep it together, so perhaps it's time now for someone else to talk about Grant.

But several times last week, I thought about a beautiful song. 'The Sleepwalker' was written by Chris Matthews while he was in Children's Hour. The rest of the band talked about the song reverentially, but they never recorded it and the only time they played it live was years later, as an off-the-cuff encore at the Kings Arms when they reformed for a handful of shows in 2005.

The song was eventually recorded when Chris was with the Jefferies brothers in This Kind of Punishment, and was released on the album A Beard of Bees.

Happily and fittingly, A Beard of Bees is one of the early TKP records newly re-released – after nearly 35 years! – by the Superior Viaduct label. You can buy them, for a mildly breathtaking $60, from the Flying Out store. (The project has also had the happy effect of of getting the long-estranged Jefferies brothers communicating again.)

But the song's complex and interesting story doesn't stop there. In 1995, Cat Power recorded a version for her debut album, Dear Sir. And I say "version", because it's ... different. So much so that some Cat Power fans are quite emphatic that she wrote it.

"I friended Cat Power on MySpace – obviously a while back!," Chris tells me, "And chatted with her a few times, but after I asked her who did her publishing and stuff for her first album she went mysteriously quiet. I can’t imagine she sold a million copies of it but I never saw a cent in royalties. The weird thing is that she changed the chord progressions, the melody and a lot of the words, so if she’d just changed the title then nobody would have known it was my song!"

The other thing about that version is that it is, frankly, not very good.

"She’s done some wonderful cover versions of songs," agrees Chris. "Just not my one ... "

The song came back again after that, when Chris incorporated elements of it into the Headless Chickens' 'Mr Moon'.

"I recycled the verse melody from 'Sleepwalker' for the 'Mr Moon' chorus. Originally, the chorus for Mr Moon was just going to be my guitar line and with no words and then I realised it was the same chord progression as 'Sleepwalker' and that vocal melody worked nicely with it – and since not many people heard 'Sleepwalker' at the time then I might as well use it again."

Chris swears he's going to get around to suing himself for copyright infringement one day, but is understandably hoping to settle out of court.

I was chatting to someone at a party on Sunday who told me about a young Ngati Porou guy called A.ZEE who is not only recording his own tracks but creating videos for them. He's creating a lot – there are 53 videos in the rap section of his YouTube account, and 129 featuring just beats – and this sounds like a great song to me:

I reckon he deserves some attention. There's a lot going on there.

A tip from Stinky Jim here. Khruangbin are from Texas, but they take their inspiration from North Africa and the Middle East – and most notably, the Persian funk of pre-revolutionary Iran. Like this:

They are, as you might expect, serious crate-diggers – and here at The Vinyl Factory they offer up their Top 10 P-funk gems ("P" stands for "Persian", right?).

The King's Arms Tavern has a busy schedule as the place works towards its closure at the end of the month, with shows by Dimmer and the D4, the return of Punk It Up and even a family fun day next Sunday.

And throughout that time, there's Departure Lounge, an exhibition by artists Rachael Burke, Jamie Wardale, Jean Stewart andGerry Copas in homage to the KA. The exhibition has an opening event on Wednesday, from 5.30pm to 8pm on Wednesday and all the works are for sale.

The very final day the King's Arms will ever open its doors is Wednesday, February 28, when 95bFM will be broadcasting from the pub the whole day  with guest bands and DJs – and even the opportunity for you to get yourself a King's Arms tattoo!

Absolutely piping hot: Coco Solid has just dropped Cokes, a Waitangi Day mixtape of material she's been working on for the last few years. She talked about the project – and about Waitangi Day – to Jessie Moss at The SpinOff this week. You can download it for free now from her website. (She also has a Patreon account giving access to her podcasts and other work for as little as $1 a month.)

Also, this sheer slice of summer is a fresh free download:

And Ronny Hammond is back with another trunkload of funk. Also a free download ...