This week's Media Take looks at a development that has barely troubled the manstream headlines but is the subject of intense debate in some Māori communities. In April, the Te Reo Māori bill passed its final reading in Parliament, after a sometimes torrid two-year journey.

All the members of the new body are due to be appointed by the end of next month, but the National Urban Māori Authority has already announced its pick: former Te Putahi Paho chair Willie Jackson. Willie Jackson is no stranger to controversy, but in this case the controversy is around his status as a non-fluent speaker of the reo.

He has already responded to what he describes as "some ill-informed ignorant and nasty comments regarding my competence in Te Reo Māori". And this week, he appeared on Media Take to debate with actor and screenwriter Waihoroi Shortland, who is described in his Maori television board bio as "a native speaker of te reo with extensive expertise in te reo me ōna tikanga."

It could have been a matter of more heat than light, but what unfolded – thanks largely to the excellent stewardship of my colleague Toi Iti – was an insight into competing visions for nurturing and propagating the reo – fluency and cultural immersion versus bilingualism and accessibility.

It was interesting to see Willie in something other than the alpha-dog role. Two or three times Waihoroi declared he wasn't about making any Maori whakamā for their lack of fluency – and then appeared to do something like that to Willie. Yet neither man was about to let rip on the other. This was a debate in which I was aware of my place, so I got to observe the dynamic close-up without necessarily participating much.

That ran over two parts and then we welcomed Mana magazine editor Leonie Hayden, who we spoke to early in Media Take's first season, not long after she took the helm of the magazine that founder Derek Fox had licensed to Kowhai Pubishing after 22 years in charge – and the cover star of current issue of Mana, Jennifer Ward Lealand, who has made a substantial and continuing commitment in learning the reo through immersion classes.

You can watch both the broadcast programme and a further online-only korero with all the panelists on-demand.

The new Mana is a special on the future of te reo Maori and its contents speak of the purpose Leonie has brought to the job. She has also continued the Mana tradition of great covers. 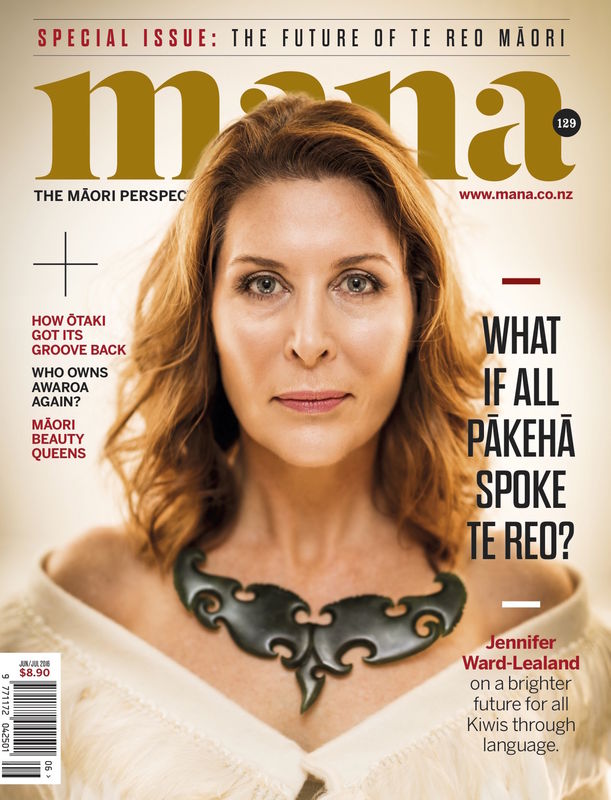