Nearly three years ago, I wrote a post called Two roads lead to the city about transport infrastructure near where I live in Point Chevalier. It was principally about the upgrade to the St Lukes interchange in support of the Waterview Connection, but also about the "other" road into town from here: Meola. We're now approaching significant junctures for both.

The interchange was officially completed last year – except it wasn't. It now looks like this (actually, it looks a bit crappier now). 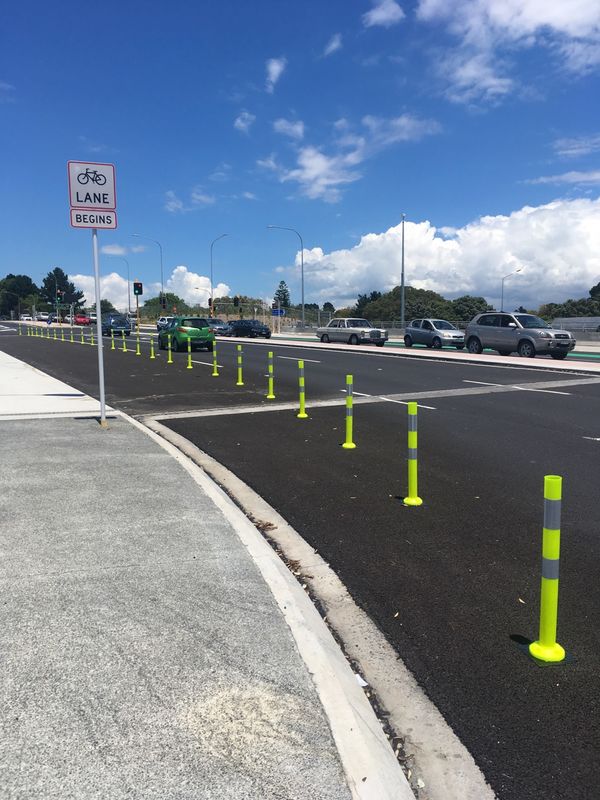 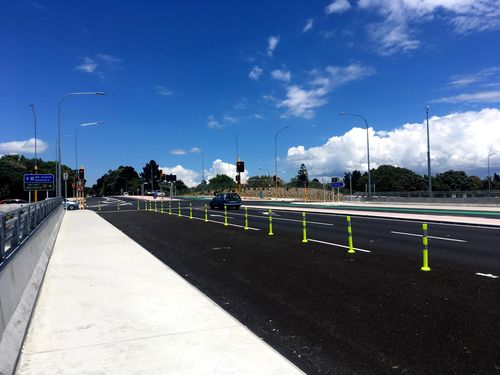 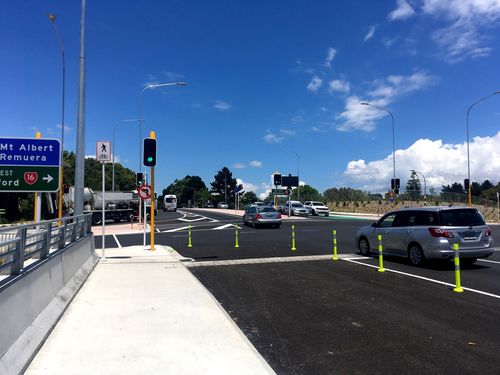 What you're seeing in the photographs is the interchange's dead lane. Auckland Transport's engineers fought for two right-turn lanes from the St Lukes bridge on to the motorway west, reasoning that the interchange would become a crucial entry-point for the northwestern motorway leading to Waterview and its promise of really quick trips to the airport.

But the engineers made the fatal assumption that they could make their plan work by converting the free left turn at the top of the St Lukes off-ramp to a Give Way and getting rid of the slip-lane that was there. They couldn't. Without the slip-lane, the intersection was a disaster and traffic backed up onto the motorway every evening.

So the slip-lane was restored – and the left-hand lane, the would-be through lane, had nowhere to go. One one level, I love it: it's a brilliantly large target to head for as a right-turning cyclist joining the northwestern cyleway to the city. But I'm genuinely puzzled that this multi-million dollar fuckup has not been the subject of headlines. Apparently only modest increases in the cost of public transport initiatives meet this benchmark.

The $85 million interchange project has created an additional motorway lane from the city to Waterview, and there are now shared paths on either side of the bridge, a a rather folorn painted cycle lane across it and a handy left-turn slip lane towards Point Chev. But as things stand, the principal goal of widening the bridge, to increase onramp capacity to Waterview, hasn't been – and probably can't be – achieved. It'll get nasty.

But the really chilling thought is that the the lane they can't work out what the hell to do with is the lane Auckland Transport's engineers wanted to cut down six old pohutukawa for. Imagine that.

The pohutukawa were, fortunately, saved by a group of Aucklanders who cared – the foremost among them being Jolisa Gracewood. Jolisa recently wrote Part 1 of a fascinating backgrounder on Point Chevalier, to provide some context for public submissions on the proposed walking and cycling upgrade from Point Chev to Westmere, which close this weekend.

In the backgrounder Jolisa makes a very interesting point about Meola Road, the "other" road to the city in my 2014 post:

The other thing there wasn’t, until the 1940s, is a car-friendly connection to Westmere. Meola Rd used to be two dead-ends connected by a rubbish dump and a footbridge. Now, it sees about 13-14,000 vehicle movements a day, as a major alternative route to Great North Road and the motorway.

She even provides a picture, from the Auckland Star in 1931. 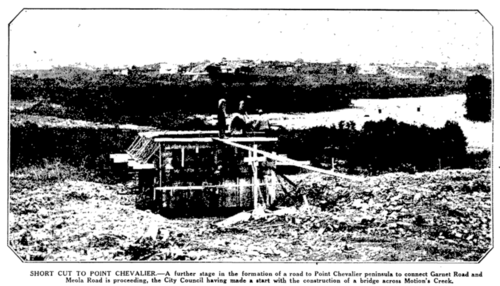 The road through the old dump is a strange beast; an example of the way we just kept loading duties on some streets. There's a hell of a lot goes on on the relatively short stretch from Meola Creek to the Westmere roundabout. It's not only a major motor vehicle route, it's a staple route for weekend road cyclists – and it's a great big parking lot on Saturday and Sunday mornings, for sportspeople and their families and people who exercise their dogs on Meola Reef. It's further complicated by land constraints, two narrow creek crossings and even the fact that it touches a boundary between local board areas.

(This last appears to have been the reason that the incline at the east end, up to Westmere, went unrepaired for years. I may be able to take some credit for the fact that it s now properly sealed, having raised it with Eden Albert local board member Graeme Easte when I wrote the 2014 post.)

There have been – and will be more – complaints about the loss of parking. But here's the thing: Meola Road really needs to lose some parking. It's not just the danger for cyclists, although I'd almost forgotten how hairy it is having to pull out in front of following traffic to get around parked cars during the week until someone else pointed it out. It's that every weekend it's a freaking parked-up nightmare for everyone. Buses (and in some parts even cars) don't have room to pass in opposite directions. Doors are always opening, it's easy to clip someone's wing mirror driving by and small children dart out between vehicles. And if course, there's always the clown who won't slow down.

But I'm not the "Let them eat shared paths" guy, and I get that cycling and public transport aren't always practical options for getting groups of kids to and from 8am games of football in midwinter. So as a matter of urgency, I'd recommend Auckland Transport talks with the management of MOTAT about developing the stretch of wasteland on the far side, by Western Springs College, as a substitute parking space. 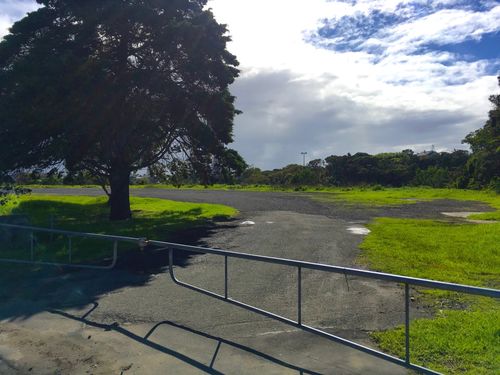 It's been earmarked as a potential car park for ages, so let it be a carpark. And let it not be free to use, at least at peak times. If you can afford that luxury SUV, you can afford five bucks for a couple of hours' unsubsidised parking.

But as Jolisa points out:

You know, there’s an alternative universe out there in which Pt Chev Rd up to Meola Rd is about to be widened to four lanes with no parking, matching the motorways that have expensively widened in all directions to accommodate the expected Waterview tunnel traffic ($50m for the stretch between Waterview and St Lukes alone). It would have been a perfectly logical response. (Don’t believe me? Drive the back way to Te Atatu via four-lane Great North Rd some time, and keep your eyes peeled for a place to pull over… yellow dashed lines everywhere.)

Instead, this plan sees parking lost to, well, people.

I can't really improve on the detailed (and very largely positive) critique of Auckland Transport's proposal published by Bike Auckland, save to note that I'd like a little more information on the right turn from Moa Road to get to the citybound path on Meola. I don't like making hail-Mary turns and the problem is usually exacerbated by someone's SUV being parked up so as to block any view of approaching westbound traffic. If parking is to be preserved around that area, please don't let it be by that corner.

But, in truth, it's not just parked cars, it's the trees. I love the trees and it's nice that most of them will be retained, but this is what you see trying to turn right from Moa: 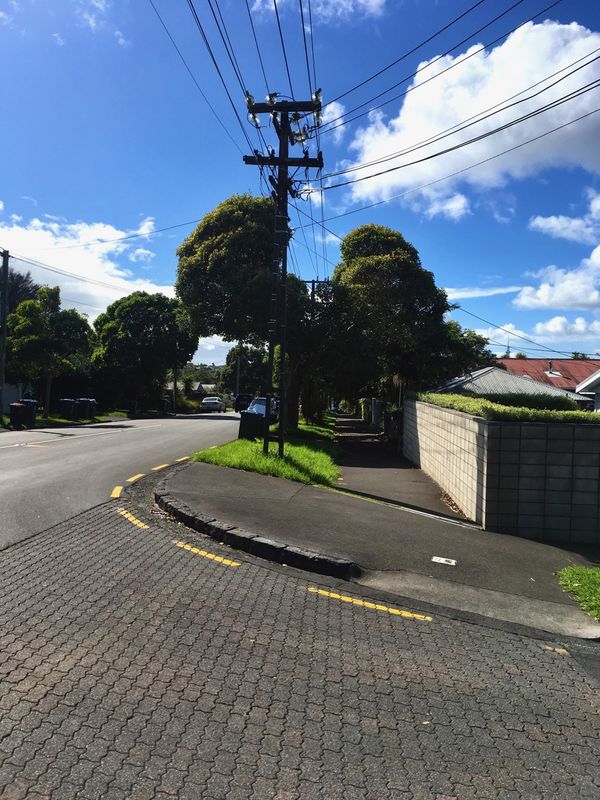 And that's not traffic there, it's a parked car. The traffic comes from behind the parked car.

It's particularly tricky around 3pm, with the schools nearby, and it will get worse when the big new kindergarten just off Moa on Walmer Road opens. Moa is already the principal through-road from Great North to Meola and that intersection is is going to get a lot more busy. Any way to make turning safer and improve sightlines would be very welcome indeed.

Anyway ... I was part-way through writing this post yesterday when I had to pop over to Mt Eden to do some work. I used that wonderful piece of infrastructure, the northwestern cycleway. As ever, getting there meant doing battle along the ugly stretch of Great North Road that passes Western Springs Park. 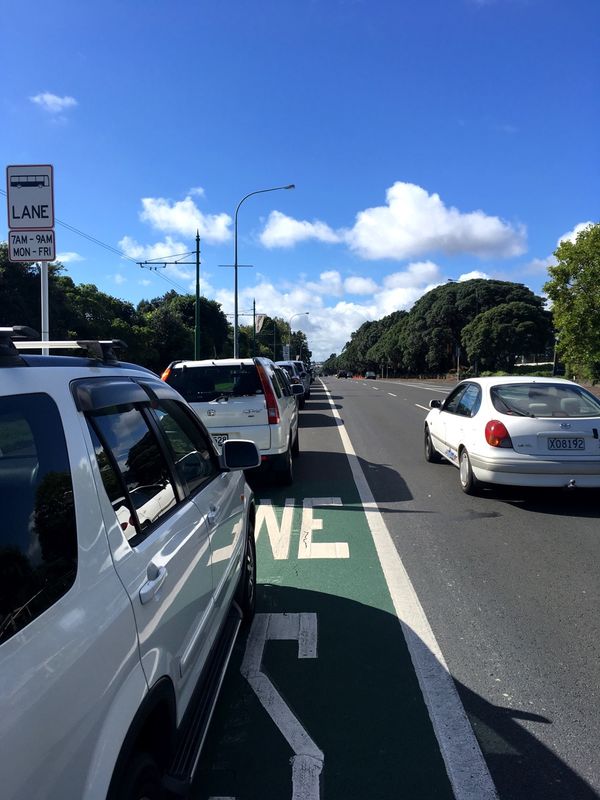 It's okay – I'm used to it. Yes, there's a constant danger of being doored along the park side, but I stay heads-up and I know when to make my break for the right-turn lane across the St Lukes bridge. I can manage the risks.

It was on the return jouney when that I encountered a risk I had no way of managing. I came off the northwestern and rolled down the left-hand turn onto Great North Road, pretty relaxed because it was after 4pm, so the westbound bus lane was live and there were no car doors to watch. And then, suddenly, there was a roaring, speeding car a metre from my elbow. If I'd wobbled right a metre at that moment you probably wouldn't have been reading this blog post.

The driver had swerved suddenly into the bus lane, at around 70km/h, to try and pass a line of cars on the inside, cutting sharply across in front of me in the process. Then he and another driver did the same thing twice more over the next few hundred metres, swerving back into the car lane each time. I presume they were racing each other. I hope it's only themselves these fuckers kill or injure.

This is a risk I can't mitigate in any way.

Auckland Transport's cycling and walking team has some great plans for a cycle network in the inner western suburbs, but they stop short of the most dangerous and difficult stretch of Great North Road, from the bottom of the Bullock Track to Motions Road. There were murmurings about some kind of cycle lanes as part of the St Lukes upgrade (hell, they lifted the whole road two metres) but that's gone quiet. And remember, this is the local access to the city's most important piece of cycle infrastructure. It's also a school route and it passes a big public park.

As noted above, I think the St Lukes interchange is going to be a bit of a disaster area when the Waterview tunnel opens. I've watched the Waterview Connection grow at one corner of my suburb and I like both the walk-and-cycle developments around it and the sweep and scale of the thing itself. But I'm not yet clear on how it'll affect the rest of my hood – I don't think anyone is, to be honest.

So I'm grateful that Auckland Transport has proposed to make Point Chevalier a safer place to get around in. Once Point Chevalier Road has those sweet new lanes I might take that route to the northwestern to cut my risk – even though it means initially riding away from town to get to town.

But at some point, someone is going to have to address the really hard part. Not only for cyclists – in the past year I've been involved in two not-my-fault car accidents on the same stretch of Great North Road, once at the Motions Road end and once by the Bullock Track. I'm just really, really glad I was driving and not cycling at the time.