Readers who pay attention to my musings on music may recall that a while back I got very excited about the news that a selection of classics from Chicago's Trax Records label were being reworked for release in a project steered by the people at DJ History.

Well, it's here, it's called Trax Re-Edited, and I have some copies to give away at the end of this post. But first, I've asked Simon Grigg -- who has forgotten more about dance music than the rest of us will ever know, to give us a review. My own thoughts follow that. 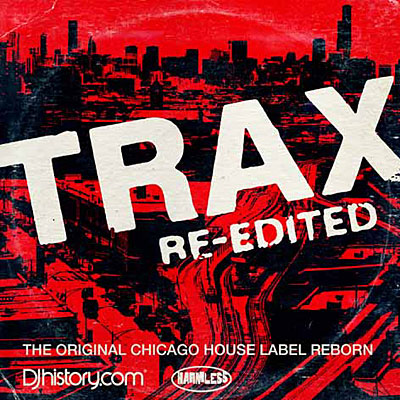 That, of course, needs to be placed in cultural context and to a kid now listening to much of what I once thought odd it doesn't sound that way. That's because odd redefines normal. And normal thereafter was altered by that odd.

Early house music was very odd - it's hard to grasp exactly how odd years on.

When it arrived many, myself included, were confused and bemused. The first house record I heard was a Farley 'Jackmaster' Funk single in late 1986. I'd bought it at the recommendation of my usual UK supplier, Eastern Bloc in Manchester and when it had arrived I'd played it over and over trying work out what it was.

I liked it but knew not how it would work in a club environment. Roger Perry played it one night at The Asylum and it split the dancefloor - the soul boys were aghast, and the hairdressers loved it.

Which brings me to Trax Re-edited, compiled by the folks at DJ History.

Some things are, by their implied nature, almost untouchable and so it is with much of the early house music. It recalls a moment when their oddness presaged a musical revolution and there is something almost sacred about the records. However, they were mutants too - they were rough reworkings, using the newly available technology of drum machines and digital samplers, of the disco records that had filled the newly hungry dancefloors of the decade before.

However, whereas the blueprints were slick and smooth, the new records were, because of technical necessity, rough and raw. They dissected and reassembled their roots.

Part of what makes me love those early poorly pressed and appallingly mastered Chicago house records is that they dissected their own roots so thoroughly and irreverently.

And you knew that nothing would be the same ever again.

For all that, the idea of someone reworking the twelve inches of perfection that is Larry Heard's 'Can You Feel It' - a simple but brutally intense few minutes without vocals that has rarely been equalled - filled me with dread. Or Jamie Principle's Frankie Knuckles-produced 'Cold World' - one of my favourite 12" singles ever. My fears, though, were mostly not grounded in logic but nostalgia.

This, despite the hype, is not the first time many of these have been reworked, or cleaned up. I have a series of 10" and 12" singles issued in the late 1990s by Trax UK which matched up remastered Trax cuts with a bunch of fairly respectable and respectful remixes.

However that was a mighty long time ago and much of this stuff has long been only available on cheap comps or bootleg 12"s often sounding little better than those original Trax pressings (notoriously on reprocessed vinyl - I have a copy of the seminal Acid Tracks with a large bit of paper poking out of the plastic - I love it all the more for that, but I can't play the thing).

Enough rambling - for the history of this mighty, but mightily dysfunctional record label, I recommend you to the videos here, where Bill Brewster and Frank Broughton of DJ History talk all things Chicago house with Ian Dewhirst.

It is to these three that we owe this new collection, and as importantly, the fact that it's been done not only tastefully but also not overloaded with the obvious 'Hits of Trax'™. That means that for every Adonis' 'No Way Back' (likely in the top five compiled Chi-house tracks of all time) there are at least three tracks that only the most hardcore, retentive, trainspotter knows.

So what doesn't work?

There are a couple of tracks that seem to offer little more than a happy and affectionate touch-up, and that's fine, but when it kicks it really kicks. The opening track, Virgo 4's 'Take Me Higher', a song that owes more than a passing debt to Big Audio Dynamite's 'E=MC2', as reworked by Rang Mang, is just lovely, all shimmers and waves, and that kicks into Farley 'Jackmaster' Funk's 'Farley Knows House', an obscure-ish groove that is about clattering 808s and percussion - I can feel the dancefloor dragging me back to ‘87 and all that oddness.

That takes you to one of the album's highlights, the afore-mentioned 'Cold World'. The Hotel Motel edit sounds like it's another loving re-tweak until, at around 6m it heads off in a padded percussive direction that the original only hinted at, finding itself touching on deep melodic acid a couple of minutes later. It's gorgeous and perfect.

And so it goes - track by track it really does work. It's warm, it's reverential, albeit not overly, it's vaguely modern but not desperately so, and best of all, the one track I was most dreading hearing, Can You Feel It doesn't make me tear the disc out of the player - instead I now find myself returning to the way John Daly has turned the raw acid growl into a soft 303 shuffle, thus accentuating the melody in this most beautiful of all electronic recordings, over and over again.

A success? Nah, I'd say it's a fucking triumph.

One of the things I like most about this music is that it is proof of William Gibson's slightly misquoted maxim that "the street finds its own uses for technology". No one was meant to use Roland's TB-303 bass synthesiser the way DJ Pierre used it. It was made for lounge-bar bands and karaoke. Pierre and DJ Spanky, as Phuture, took one home and wrenched from it the thunderous, looping 12-minute monster that is 1987's 'Acid Tracks' -- the first acid house record.

As Trax' dodgy supremo Larry Sherman observed in the fascinating British documentary series Pump Up the Volume (Part 1 here on Google video or in lesser quality on YouTube):

They didn't know how to play their instruments -- most of them weren't even musicians. They came along with the music media, with the electronic revolution. They learned how to beat out simple rhythms on the drum machines that nobody knew about. They learned how to use sequencers when sequencers were strange toys. They were innovators, pioneers. It was just a special time.

'Acid Tracks' is missing from this collection (and, really, what would you do with it?), but it's available either separately or on the Trax Records 25th Anniversary compilation, as part of a magnificent effort to get the label's sprawling back-catalogue on Bandcamp.

The house sound of Chicago predates the founding of Trax in 1983, taking its name and its style from the city's Warehouse nightclub, where DJs explored the deeper reaches of disco. The first time I can recall hearing it was in 1986, when Farley Jackmaster Funk's 'Love Can't Turn Around' topped the singles charte in Britain. (That song does have unfortunate memories for me: I associate it with the record shop Christmas party when I went home with this really nice girl who worked part-time at the BBC but we were too drunk, the sex was accordingly hopeless and we never got together again. Sigh ….)

There began another chapter in the great history of British pop culture making heroes of niche black musicians who were unknowns in their own country. Acid House happened in Britain, it was a tremendous time to be young and alive in London, and music wasn't the same again. House music really did change my life.

The other thing that touches me is the extent to which this music comes from marginalisation. This is music originally made for -- and often by -- black, gay men in decaying urban spaces. Drug users, outcasts. Anybody who came to it, came on their terms.

Like Simon, I can't find a moment on Trax Re-Edited that jars. The gaping originals have been tightened up and redirected for modern ears, but the sounds essentially remain the same. I listen to the space in these big, strange tunes and I think, really, you can keep your damn Chemical Brothers.

Anyway, thanks to Roger Atmore at the New Zealand distributors, Triton Music, I have three copies of the Trax Re-Edited double CD to give away. Just click the little envelope icon and email me with 'Trax' in the subject line to enter.

The winners are: Christopher Dempsey Dave Ryan Mike Tasman-Jones (Should you not win and still want, it's in store at JB Hifi and available to order at Marbecks, Beat Merchants, Real Groovy, et al.)

Meanwhile, you can also try out some of Trax Re-Edited in this free mix by Leftside Wobble. Byee!