In late 2011 an Auckland 16 year-old began going to to a tiny commercial studio in Morningside most days after school and, with exactly one other person, made first an EP and then an album that turned out to be a game-changing global hit.

While she committed the odd misstep, she generally established herself as intelligent, creative and preternaturally mature –all the while growing up in public. Then, towards the end of that album's cycle, she sacked her manager, got off the treadmill and took a long break from performing. Long enough to become a 20 year-old.

I gather there were some crises of confidence for Lorde in recording the difficult second album. How could there not be? The idea of replaying the magical duo with Joel Little came and went and explored collaborations with various other people. This was significant in the sense that the great distinction of Pure Heroine was that it was made with such a limited cast in an era where any given pop single might have been sweated over by six writers and five producers.

Wednesday night after 9pm was a great night. While Martin Guptill was playing out one of his country's great one-day cricket innings, Lorde was sprinkling breadcrumbs. A week's worth of teasers peaked in a treasure hunt where clues to the title of her new record – at the time we didn't know whether it was a single or the whole album – were placed around central Auckland.

The whole Lorde world was watching from its time zones and it felt kind of special that Aucklanders got to select themselves as global reporters. I looked at the pics and watched the funny-ass Periscope stream of three young gay men on a Herne Bay beach bathed in green light. ("Are we crusing?" "Yeah, we're cruising" "Where's the daddy-dick at?")

We got the title – 'Green Light' – and a slightly longer teaser of the tune itself. I went to bed with an earworm of a song I hadn't really heard.

Well, firstly, it's the breakup song. And imwaitingforit was not only the name of the teaser website, but the refrain from the chorus. And the other part of the tease, M******A, now translates to the title of the second album, Melodrama.

Inevitably, this, although the opening is sparse and wordy, this isn't the minimalism of the first album – the chorus is that of a kitchen-sink banger.   But I like love the house-style floating piano riff and turning it up reveals some thumping drums..

Some people claim to be hearing Taylor Swift in there. I wouldn't know, but the co-writer and producer (for not just this, but the whole album apparently, so there's some continuity with Pure Heroine) is sometime Swift collaborator Jack Antonoff.

And a word for the video. It's cool. The images are thought-through. The pampered popstar dancing wildly on the roof of her luxury while the driver waits bored.

So, yeah. Welcome back Lorde. Thanks for making it interesting.

Let us also note that there is another follow-up release by a highly talented young woman from New Zealand today.

Nadia Reid's second album, Preservation, is out now and you can buy it for $15 on Bandcamp. It's like this:

And Pitch Black's single of 'It's the Future Knocking', with remixes by International Observer, Alpha Steppa and Deep Fried Dub.

Oro Festival has announced its lineup around headliners Underworld for April 8: 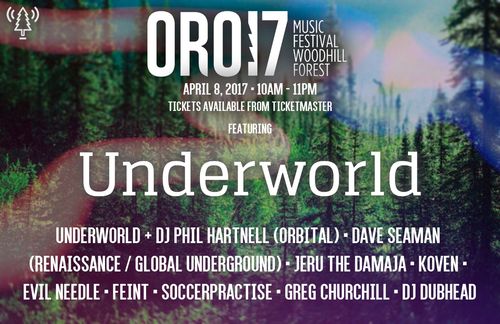 I've heard one other (exciting) act mentioned in gossip, so perhaps there's more to come. At any rate, this is an unusual and ambitious show. It's in Auckland: not in town but at a location in Woodhill state forest owned by the local iwi, Ngāti Whātua o Kaipara. As a matter of respect for the site, only a few VIP ticket-holders will be allowed to park onsite and everyone else will be buying either park-and-ride bus tickets or the ride all the way from town along with their tickets.

The promoter is the respected club doyen Dave Roper, who has been quiet lately but is clearly roaring back with the one.

Over at The Spinoff, there's Gareth Shute's oral history of perhaps the most memorable event in New Zealand hip hop history – the Boost Mobile tour, where Telecom threw a whole lot of money at an ascendant local rap scene and sent a bunch of excitable kids around the country, twice, to market is new budget mobile brand.

It's a great read. I had not, for example, ever heard of what Savage describes here:

In Gisborne, we had two different opposition gangs in the crowd. And right on ‘Not Many’, the encore song, apparently some gunshots went off. All the security could hear was a pinging noise off the poles, and popping coming from the crowd. So it sounded like they were shooting at the stage. And you know you have the truck that takes all the equipment, the security rushed us from stage to that truck and we had to drive out into the wop wops, but at the same time, we had people trying to follow us. So we had to meet our bus in the wop wops before we went back to the hotel. It was crazy like that.

Perhaps the only thing missing is credit for the woman who made it happen from the Telecom end – former 95bFM general manager Suzanne Wilson.

There's a rightful shitstorm blowing up over this part of the new South By Southwest festival contract, which aims to deter SXSW artists from playing side-shows, doing informal marketing or anything else the organisers feel affects them by, among other things, threatening to hand them over to US immigration authorities. New Zealand artists have been trekking to Austin for years. This would seem to add a huge degree of of peril for them. Don't do any busking, right? 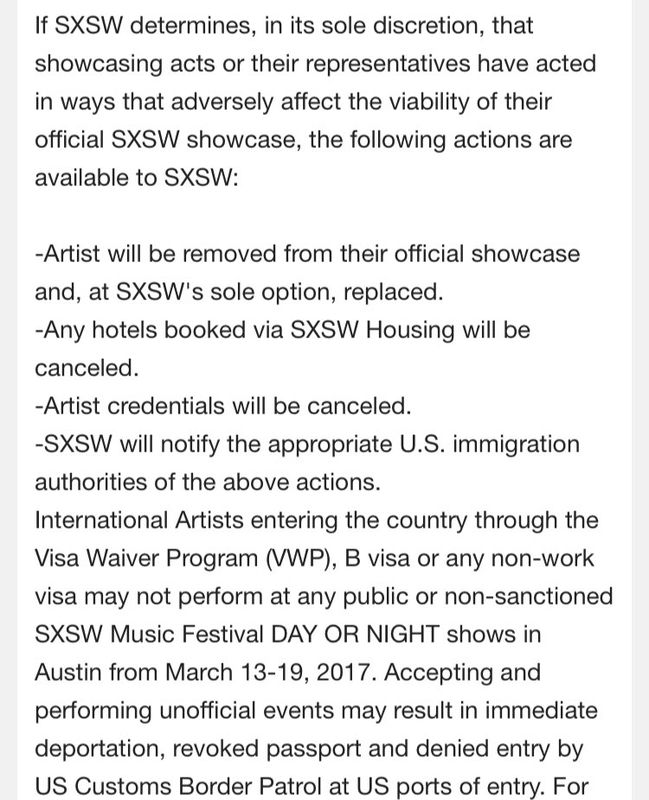 Bandcamp celebrates the arrival of the On-U Sound catalogue (well, some of it) by interviewing label founder Adrian Sherwood along with his sometime collaborator, UK dubstep pioneer Pinch. They have a new album together, Man vs Sofa.

The offerings from the catalogue are fairly rich. For instance, The Discoplates Collection features digital versions of the 10" EPs that have been a feature of the label since 1982, including the recent archive comp
An On-U Journey Through Time & Space, which gathers four sci-fi themed tracks, including this absolute classic:

And a deep dig in the archives with Trevor Jackson Presents: Science Fiction Dancehall Classics from 2015. Which isn't strictly as the title suggests, but features some of the label's more far-out sounds, including a previously unreleased Neneh Cherry track.

Staying on the dub tip, the legendary British DJ David Rodigan has a new book, My Life In Reggae. There's an excerpt here about meeting King Tubby and buying some dubplates. And an enjoyable interview in The Guardian.

Sounds more like disco than reggae? Well, yeah – but it's the sound system vibe, innit?

Four black artists from New York have clubbed together and bought the house in North Carolina where Nina Simone was born, to ensure its preservation. This makes me happy.

Andrew Schmidt has an epic article on The Terminals up on Audioculture.

And there's this Gilles Peterson audio documentary on the musical heritage of Capetown, which looks great: