It's been dark a long time but it's starting to feel like summer. And that means the parties are starting. The nice people at Base FM kick off with a party on the roof of Rydges Hotel in partnership with Splore this Sunday. It runs from 2pm-8pm and features a live performance from SoccerPractise plus sets from Dylan C, FJ and other Base DJs, covering quite a range of styles. More details and (essential) free RSVP here.

95bFM has put together a really good-looking Christmas Party at the King's Arms on December 1, featuring Yoko Zuna, merk and Roy Irwin, among others, plus DJ sets from Princess Chelsea and the Grow Room. It's free but go here to RSVP.

Stinky Jim and Dubhead are grooving up Hallertau Brewery tomorrow afternoon. That sounds like a nice Saturday.

Much as I've been enjoying Leisure's debut album, I'm pleased to see that one of the band's members, Jordan Arts, is busting out for an evening to do do a show as High Hoops. He's playing with Spycc at REC on Saturday December 3 (tickets here), two days after the release of a new single, 'Burn It Up'.

I'm doing The Mixtape with Alex Behan at 5pm on Music 101 tomorrow afternoon. The trick with these things is to choose songs that not only work as a playlist, but which come with stories attached. I've only called Alex back with one panicked change to the list so far, so I figure I'm winning.

You might also be interested in Episode 3 of From Zero, my RNZ podcast about New Zealanders and drugs. This episode is 'Drugs and Popular Culture' and it features quite a bit of music – and a nice interview with Tom Scott of Home Brew and Average Rap Band.

Also tomorrow: I'm playing some vinyl records at Real Groovy from 1pm-3pm. All styles, as ever.

Kim Pflaum, formerly of Yumi Zouma, plays Whammy bar tonight (and Moon in Wellington tomorrow night in support of Bad Humours, her debut EP as Madeira. It's a pretty cool record. I like this Lontalius/Race Banyon remix too:

A gorgeous (and good-humoured) new video for Fat Freddy's Drop's 'Fish in the Sea':

Russell Baillie talks to Ian Chapman about his new book, The Dunedin Sound – Some Disenchanted Evening. And Audioculture has an except from the book – Amanda Mills' wonderful essay searching for evidence that the "Dunedin Sound" is a thing.

The illustrations are a treat too. This is Alec Bathgate's HP agreement for his Les Paul copy guitar, 1977. He later sold the guitar to David Kilgour and it can be seen in most images of the Clean through the 1980s. 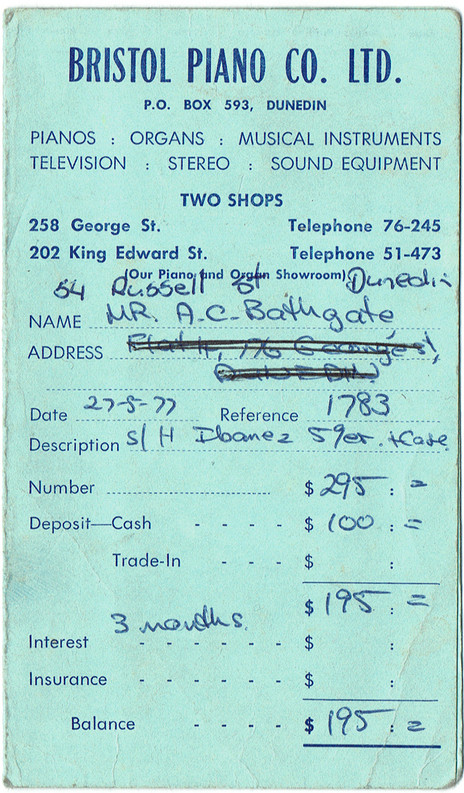 A few of these have emerged before, but Audioculture now has a full crop of Fiona Clark's images of early Auckland punk rock, centred on the Idle Idols and Zwines. There's a decent enough photographic record of this time, but most people were shooting in black and white. The colour is what makes Fiona's pics special. 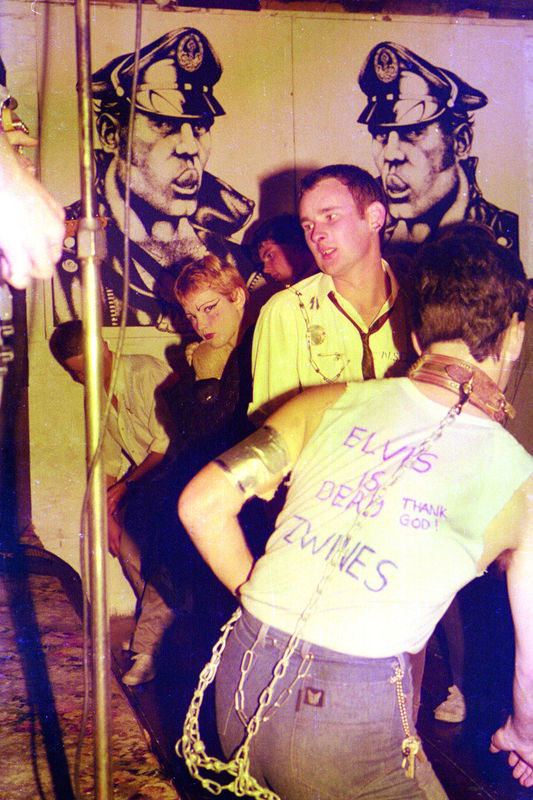 In the centre, Jonathan Jamrag, at the time this was taken in Rooter. He would leave a month later to form The Atrocities, but is probably best known as the frontman of Proud Scum. In the front, Craig, the vocalist with The Aliens. Behind Gail Young, now a designer in Paris.

Whoop! New Dimitri from Paris! And it's fully afro-disco! This is an instrumental version of his new single. Click through for a free download. Yuss.

And finally, I'd really like to thank Dan and everyone at The Audio Consultant for supporting the Friday Music post every week. They're good people. They're moving on now, so I'm looking out for a new sponsor. It's a very modest rate for a weekly presence, so if you think that might be you, click the email link under this post and get in touch.