As parts of England experience a "Level Three" heatwave -- one short of a national emergency -- I can't help but have two frivolous thoughts. One is: this is already a memorable Ashes series. The other: how are the tunes?

Movements in popular culture tend to be associated with summer. No one ever declared the Winter of Love, did they? Britain's so-called Second Summer of Love (really a conflation of the tolerable summers of 1988 and 1989) began a global revolution in contemporary dance music. The long, hot Jamaican summer of 1966 is reckoned to have birthed pop's most beautiful genre, rocksteady reggae, by obliging the dancers and DJs to ease off the frantic pace of ska.

And there is the British summer of 1976, which saw a heatwave so intense that it has become the benchmark for British summer sizzle. From that, punk rock was fermented. As kids, we read about this in the New Musical Express, and for a long time I thought that's what this record was about: 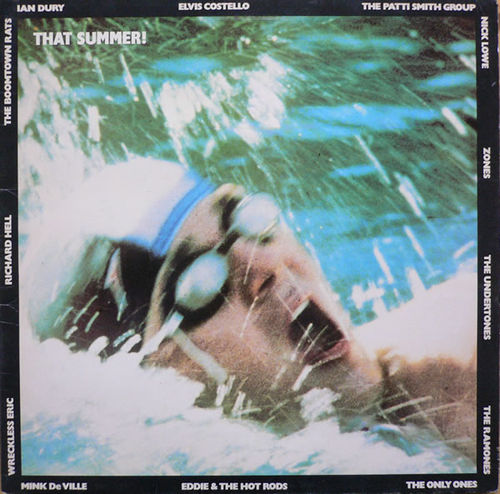 That Summer! is actually the soundtrack to an obscure British drama film, notable chiefly for being the big-screen debut of Ray Winstone. No, I haven't seen it either. But, man I listened to this record a lot when I was a kid. I mean, check out the track listing:

Elvis Costello – (I Don't Want To Go To) Chelsea

Boomtown Rats, The – She's So Modern

Only Ones, The – Another Girl, Another Planet

Patti Smith Group – Because The Night

Eddie And The Hot Rods – Do Anything You Wanna Do

Ian Dury And The Blockheads – What A Waste

Nick Lowe – I Love The Sound Of Breaking Glass

It's pretty much what there was to know about at the time -- or rather, it did a lot to shape perceptions out here in the colonies as to what was worth knowing about. But sadly, it appears it doesn't exist any more: it couldn't find it on iTunes or Spotify. Might perhaps one of you accept the challenge of recreating it through a shared Spotify playlist?

Speaking of Spotify, in the week of the Radiohead walkout, an interesting backgrounder on how it actally pays out to artists. The short version seems to be that the owner of the master recording does best out of the streaming services.

Connor Nestor did a Q&A for TheAudience with Boycrush, who has this new tune ...

And also, really good taste in music. Does Boycrush ever DJ?

From Leftside Wobble: "The Bowie thing, the Trouble Funk thing and the Rick James thing now available on one EP."

And from all-round good dude Peter McLennan, his jumping edit of a 1979 Edwin Starr track:

In a different tempo, a nice, rather pungent singer-songwriter thing from Liv McBride on TheAudience:

Ace YouTube uploader chillblue07 has fetched Look Blue Go Purple back from 1985 at the Dunedin Art Gallery. The camera angles are  ... unorthodox:

And, finally, if you're able to have your auntie send you these things on VHS, the new BBC Imagine doucmentary on Rod Stewart is a highly engaging film that emphasises how good his good stuff was, and, quite fairly I think, makes him look like a gentleman now. Here's 'Maggie May' from Top of the Pops in 1971. Amusingly, it features John Peel affecting to play the mandolin: