If music is important in your life, you probably have a special record. You may have more than one, especially if you're a DJ. BaseFM asked its considerable fleet of DJs to choose just one, write about why it mattered and lend out the sleeve for its Cover Story exhibition for Artweek Auckland.

I went along to the opening on Wednesday night and, perhaps partly because so many of the people were in the room, I found it really quite moving. A common theme in the stories was family: Dad's records, Mum's records, just the records that were in the house long ago.

One of those stood out for me. OoGuN from Drunk Elephant Sound chose  Fela Kuti's International Thief Thief. 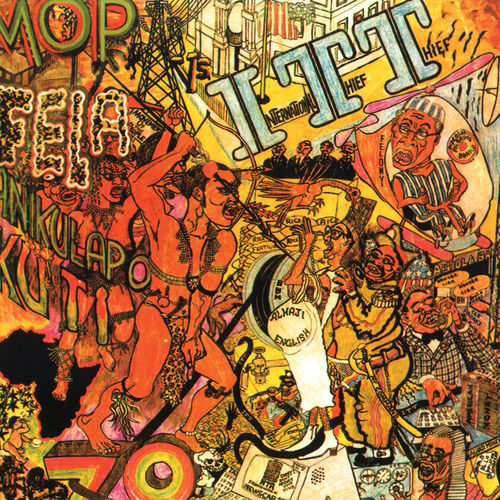 He wrote about growing up in Nigeria and hearing it as the first record where Fela used his music as "an alternative news channel" and about it being part of his late father's massive record collection and about not realising until years later when he bought his own copy in London that a member of his extended family actually played on the record. 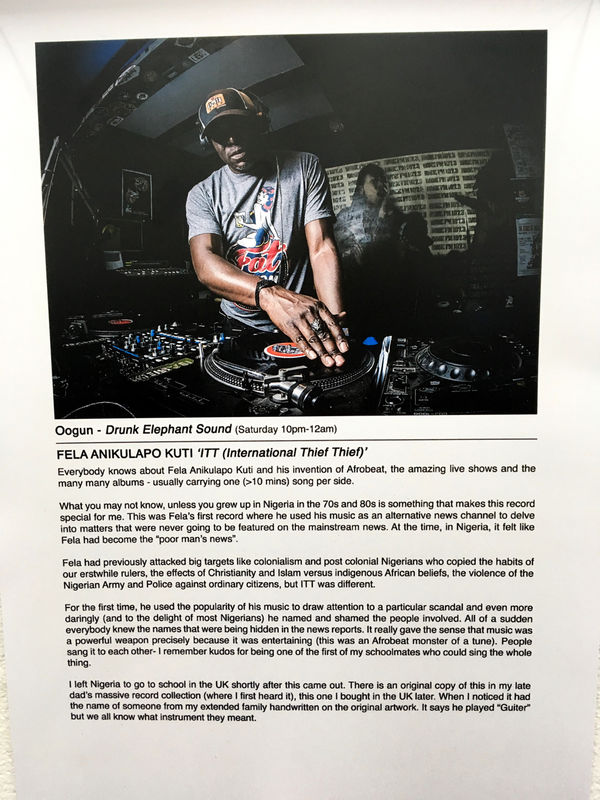 The record has a different resonance for me.

Nicole King was my first real girlfriend, when I was 17. She was two years younger than me in age and 10 years older in sophistication. Her parents, Bruce and Adele, who both taught at the University of Canterbury, were the first New York bohemians I ever met. They were probably the only ones in Canterbury at the time. It seemed so exotic that Bruce would still be in his robe on a Saturday afternoon and that Adele would smoke coloured Sobranie cigarettes.

They treated me, as they did their daughter, as someone with whom cultural matters could be discussed. They took us to see Andy Warhol's Chelsea Girls (Bruce, in a very bohemian fashion, decided to go for a walk during the movie). I'd go around for dinner and they'd serve each part as a separate course. They were astonished but grateful when, as a well-brought-up boy, I would spring up and do the dishes. They introduced me to sashimi, wasabi and sambal, in 1980.

And Nicole introduced me to that record. She explained that it was significant and that the title was a play on the name of the telecommunications multinational I.T.T. And she played it, the first afrobeat record I'd ever heard, and it blew my mind.

We broke up but stayed in touch, even after she went to university (Brown) in America and subsequently settled in Paris. I called her one day from Gare Lyon as a surprise and she told me off for not giving her notice – she and her boyfriend were just off to stay at a millionaire's place in Italy. I stayed in their apartment and had a romantic few days visting Jim Morrison's and Oscar Wilde's graves at Père Lachaise, drinking wine, reading Nicole's back issues of the New Yorker (for the first time!) and making copious notes.

A year or two later – and 10 years since she played me that Fela record – Bill Direen, a mutual friend, called me in London to share the terrible news that Nicole had died. She had been trapped in a fire in their apartment block –  there had been negligence in the part of the landlord. She was buried at Père Lachaise.

Seeing that cover this week brought back all those things. Records can do that.

I've previously mentioned the new music venue (that seems a more appropriate word than "bar") REC down the bottom of town at 38 Customs Street – and last night I had the unexpected privilege of being the first act to play there, at the launch event.

About half the set was before the time on the invites, so it was mostly me playing records for the barmen (I do wish I'd got their dance routine to The Mary Jane Girls on video), which was cool. But as the room filled up and I nudged up the volume, I was able to confirm that for once, a new venue boasting a cracking sound system really does have a cracking sound system. I'm not much of a DJ really, but damn the tunes sounded good. I'm almost surprised GeoNet didn't have a word about the filthy great Public Enemy break in Madonna's 'Justify My Love'.

It's an excellent room too: good sightlines, lots of wood and exposed original oak rafters in the ceiling that create a built-in audio baffle. The first public show is tonight and features Cut Off Your Hands and Yukon Era. Scuba Diva, Puple Pilgrims and Eyes No Eyes play tomorrow night and there's a record fair at Recreation Records, the venue's store, at 10am on Sunday.

The New Zealand Music Awards finalists are out, with multiple noms for Broods, MAALA, Fat Freddy's Drop and the Phoenix Foundation, suggesting that the entertainment's going to be good at this year's ceremony. This year also sees the first stand-alone ceremony for the "artisan" awards for best producer, engineer, cover art and video.

At Audioculture, Nick Bollinger opens his Alastair Riddell profile with – what else – that 1974 New Faces appearance by Space Waltz. I was a 12 year-old fan and 'Out on the Street' was the first record I ever bought with my own money.

On a lighter note, Gareth Shute has The Top 10 Haircuts of the 80s.

Just one entry this time: Princess Chelsea's new covers album, Aftertouch. You can pre-order the vinyl.