Friday Music posts here don't generally have much to do with my day job helping make a media TV show, but next week's Media Take is an exception. We're putting together a New Zealand music month-themed programme and one of the things I want to look at is whether the "Lorde Effect" happened.

When Ella Yelich-O'Connor got on her way to pop stardom a couple of years ago, there was a feeling that her success might open the door for other New Zealand artists. Or, at least, that having "New Zealand" on your calling card might get your calls returned for a while. To an extent, I think it did.

The most obvious example is Broods, who were there at the right place and right time to win themselves a major international record deal off the back of a single Joel Little-produced song. It helped, of course, that they had a few more songs in the bag and a manager who had learned his lessons.

Separately – but still enjoying some sort of halo effect – Janine Foster (aka Janine and the Mixtape) was working her way towards a deal with Atlantic Records in America. Again, there was a manager who had learned his lessons: Andy Murnane and his business partner Brotha D hit a point in 2007 where the company they'd built, Dawn Raid Entertainment, was in a mess and would have folded had they not been helped out of liquidation by South Pacific Pictures founder John Barnett.

Now, in their own right and as part of Frequency Media Group, they are both the hub of South Auckland soul and hip hop and New Zealand hip hop's bridge into America. Murnane in particular has developed key US media relationships – Billboard, MTV and others – that helped make Janine and her strange, serious R&B a proposition for Atlantic. After two years of working her brilliant Dark Mind EP, she released her first new EP with Atlantic this month:

My emphasis on management here is intentional. For decades, it was the missing piece of New Zealand music and it's beyond debate that Lorde's manager Scott Maclachlan played a key role in her extraordinary rise. Hence the chatter about Lorde and Maclachlan parting ways this month, which extended to this shitty piece of clickbait by Eamonn Forde in The Guardian, which was ably answered, in The Guardian, by Elle Hunt. I'd debate a couple of things Elle says, but she's essentially on the money.

There's a persistent myth around Lorde that she was manufactured by Maclahclan and her label, Universal Music. It's hard to think of a pop artist for whom that is less true. Forde gets it half right when he writes about the role of a good manager being the that of the person in the room who says "no". In Lorde's case, the grown-ups around her said "no" a lot – but they said it to the outsiders who wanted a piece of her. They gave her room to develop.  She's an 18 year-old savant now. She has a great publishing deal, a label that understands her and a powerful booking agency – and she's back in that tiny studio in Morningside making music with Joel. I really think she'll be okay.

As I noted recently, Scott Maclachlan has a new teenage talent. Thomston has started on his round of festival sets and showcases in Europe. He seems to be taking being "the next Lorde" with good grace. If he has anything in common with Lorde apart from their age, it's that they approach their respective versions of pop from strange angles, and say oddly serious things with it. (You might also say the same thing of Janine.)

Thomston isn't the only one in Europe. Eighteen year-old Eddie Johnston characterised his current global round of meetings and shows with this emoji masterpiece:

And Princess Chelsea sold out this hall in Prague this week (pic by Ben Howe): 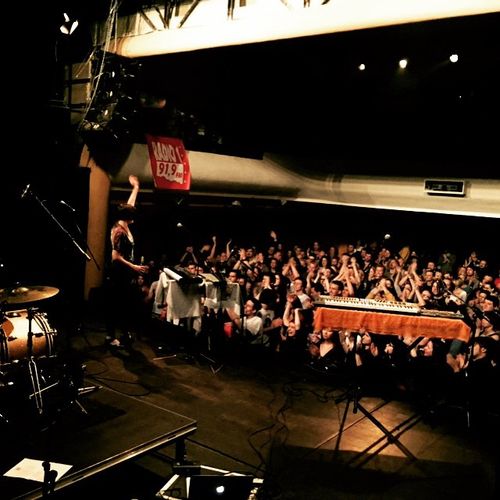 Headed that way before too long, presumably, are the Phoenix Foundation, whose new album Give Up Your Dreams, is out August 7 on the British-based Memphis Industries label. This week they dropped a cool new single, 'Mountain'.

You can have that right now if you pop over to their web HQ and pre-order the album.

Also on the wires this week, the first taste of a new album from Pikachunes:

Pikachunes is interviewed here by Noisey – and is one of the 7 Kiwi bands you need in your life named this week by the Austraian website hhhappy. When local publicists frequently despair of places to even pitch stories, the frequently enthusiastic coverage of New Zealand music outside the country is quite remarkable.

And that's very much the case right now for Ruban Neilson, aka Unknown Mortal Orchestra. Pitchfork's story on the story behind the new UMO album Multi-Love is utterly fascinating. NPR has been preview-streaming the album, as has The Guardian.

But you know what those guys aren't doing? They're not giving you the chance to win a copy of the Multi-Love album. Well, I am. Three copies, in fact. Just click the email link at the bottom of this post and mail me with "UMO" as the subject line. I'll draw the winners over the weekend to give everyone time to get in there.

I really need to stop writing this blog post and get on with my day, but a couple of things to note ...

If you want to come along to the recording of that Media Take show, we'll need you at TVNZ (vctortia Street entrance at 5.30pm on Monday. Our guests will include Dawn Raid's Brotha D, Mark James Williams (aka MC Slave aka Loggy Logg), Jan Hellriegel, NZ On Air's Sarah Crowe and a panel of waiata Maori artists still being confirmed.

Tomorrow night in Auckland is like dance music Christmas. At Society & Nook in Exchange Lane the legendary (and I'm not using that word lightly) New York disco producer and DJ John Morales is playing a very intimate show. And 100 metres away in Vulcan the original house music vocalist Robert Owens is playing at Cassette – he also plays Bodega in Wellington tonight.

And you know what? I have a double pass to John Morales to give away. Click the email link at the bottom of the post and put Morales in the subject line. I'll draw that this evening so you can be well-prepared.

Meanwhile here's Morales's simply magnificent dub of Candi Staton's 'Young Hearts Run Free', a record he actually helped mix back in the day. No longer a free download, but I suspect he'll drop it tomorrow night:

In a completely different vein, next Friday the 29th, Wellington's Eyegum Music Collective is staging another one of its house parties -- this one featuring Graeme Jefferies of This Kind of Punishment and Cake Kitchen fame.

And on that same day in the morning, 95bFM is staging a great-looking Breakfast Club show featuring Pikachunes and the best punk band in town, PCP Eagles, from 6am to 9am at Real Groovy Records.

And finally, as a reward for reading all the way down, here's a free download of a sweet-as house remix of Chelsea Jade covering Rihanna. You're welcome ...